No. 9 Vanderbilt falls to No. 1 Tennessee 5-0, falling victim to series sweep

The Commodores were unable to avoid a series sweep to the Volunteers, thanks to commanding pitching from Tennessee. 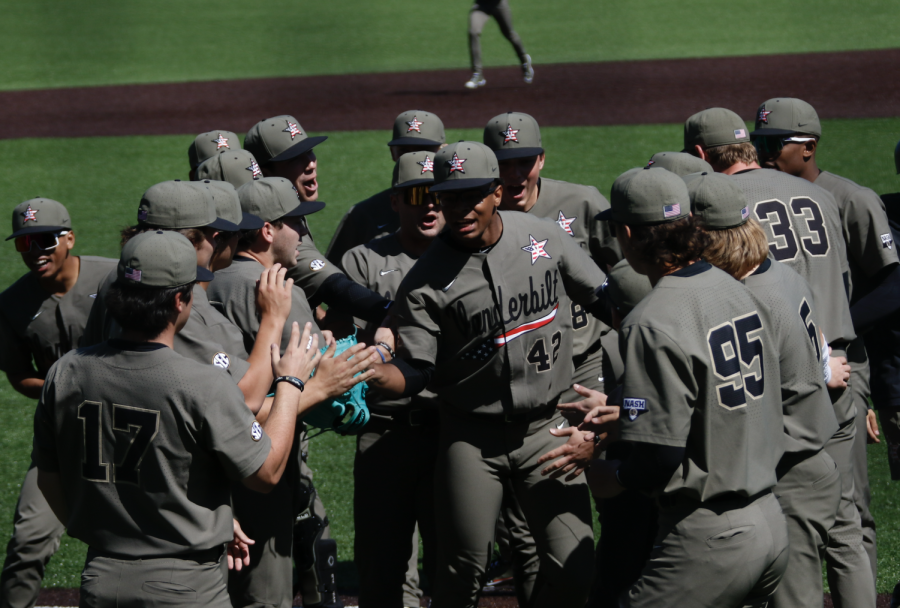 After losing to the Tennessee Volunteers (27-1, 9-0 SEC) on Friday and Saturday, the Vanderbilt Commodores (20-7, 4-5) were unable to avoid a series sweep, due to Tennessee’s stellar pitching from Drew Beam. Beam pitched from start to finish and allowed only two hits on 110 pitches. Since going on an 18-game win streak, Vanderbilt has lost five of its last six games.

“They [Tennessee] were the far better team in really every way,” head coach Tim Corbin said. “They kind of suppressed us with their arms. There’s no doubt about that. They put us to sleep and they didn’t give us anything. They flooded the strike zone the entire weekend.”

Second-year pitcher Patrick Reilly got the nod for the Commodores and threw 96 pitches and 60 strikes in five innings. He allowed one run and two hits on the 22 at-bats he faced. The sophomore pitcher proved to Vanderbilt fans once again that he is worthy of being a consistent Sunday starter for the VandyBoys. After Reilly’s solid showing came to an end, Christian Little entered the mound. Little, Thomas Schultz and Grayson Moore pitched for a combined 68 total pitches and allowed seven hits and four runs.

“He [Reilly] was good and solid,” Corbin said, “He gave us an opportunity to win and that is what you have to do, particularly on a Sunday.”

The clash between SEC rivals started as a defensive battle, but the scoreless affair looked to be in jeopardy in the top of the third inning. With runners in scoring position, the Volunteers looked to strike first. Reilly changed the narrative of the inning after striking out Luc Lipcius and forcing Jordan Beck to hit a ground ball into the hands of Gavin Casas.

After a 1-2-3 bottom of the third inning for the Vanderbilt offense, the Volunteers struck first a few moments later. Facing a 2-2 count in the top of the fourth inning, Tennessee’s Drew Gilbert scored the first run of the day after he notched a homer to right field. Before Sunday’s game, Gilbert held a team-high .458 batting average.

Spencer Jones singled in the fourth inning before the inning ended, but the Commodores were unable to secure another hit for the rest of the day. Holding a 1-0 cushion, Lipscius singled to center field and brought Christian Scott home from second base right before the seventh inning stretch. Tennessee’s Jorel Ordega sprung the Volunteer lead to 3-0 in the eighth inning when his single brought Trey Lipscomb home from second base.

“The thing about energy is that it is created by offense and getting guys on base,” Corbin said. “They took the energy out of the environment because they took us off the field.”

The Commodore fans at Hawkins Field were hopeful that the top of the ninth inning would go smoothly, but that was far from the case. After Schultz allowed a run in the eighth inning, Moore took the mound for Vanderbilt. Moore struck out his first batter but allowed two consecutive hits soon after. The Volunteer star player–Gilbert–struck again and hit a double to right field that brought home Lipcius and Christian Moore.

Vanderbilt trailed Tennessee 5-0 in the bottom of the ninth inning, but the Commodores were unable to climb out of their deep deficit. Tennessee’s dominant showing over Vanderbilt helped in securing their 19th consecutive win.

The VandyBoys return to action on Tuesday, April 5, for a clash with the Austin Peay Governors at 6 p.m. CDT at Hawkins Field.

“The game is difficult for us right now, but it isn’t always going to be that way.” Corbin said. “We’ll recover.”