VPB hosted the two speakers in person on March 29 and 30 in the Langford Auditorium, where they discussed their experiences and careers. 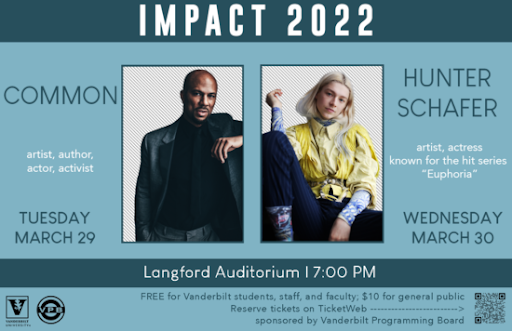 Screenshot of the VPB announcement for IMPACT 2022 taken on March 30, 2022. (Hustler Staff/Mae Monette)

Vanderbilt Programming Board (VPB) held its annual IMPACT symposium on March 29 and 30 in-person after a virtual event in 2021. It featured Grammy award-winning rapper Common and “Euphoria” actress Hunter Schafer.

Per VPB Speakers Committee Co-Chair and senior Rakesh Kathiresan, more than 1,000 students and members of the general public attended between the two days.

“We knew that both Common and Hunter Schafer would be great speakers to bring on campus who bring different perspectives and would have very important and diverse dialogue in their events,” Kathiresan said. “We were super excited when we found out they were available and willing to come.”

A tradition that began in 1964, IMPACT is a multi-day symposium that consists of speakers and discussions surrounding current events and topics of controversial nature. It is one of the oldest lecture series in the nation of its quality, per VPB’s website.

“I think the biggest thing that these speaker events do is that it brings a large portion of campus together to listen to someone who is outside of the Vanderbubble,” Kathiresan said. “To see these people in person is an incredible experience in and of itself.”

On March 29, VPB hosted Common, who gave a speech prior to a Q&A with event attendees. Common is a Grammy, Golden Globe, Emmy and Academy Award-winning artist, actor and activist. He began his speech with a freestyle rap, making references to restaurants near Vanderbilt, such as Taco Mama and Hattie B’s.

Common continued his speech by discussing the meaning of the phrase “the greatest.” He referenced Muhammad Ali as exemplifying greatness, not just as a boxer but as a person who “spoke life” into others. According to Common, love is necessary to be great. In particular, he spoke about the relationship between work and love.

“You might not be celebrated by the masses,” Common said. “You have to be willing to put the work in. Some days I wake up, and I am tired. But I still love what I do, and I am willing to do whatever it takes to elevate, to grow and to learn.”

Common continued his speech by discussing what he believes to be the second essential part of greatness: belief. He talked about believing in himself despite his initial demos being ignored by record labels and his first album not selling well.

Common said service is a third important part of being great. He spoke about his service through public speaking, specifically to young people. He said that it “shifted” his mind, and he added that selflessness is part of service.

“It means that everybody can be great because anybody can serve,” Common said. “You don’t have to have a college degree to serve. You only need a heart full of grace.”

During the Q&A portion of the event moderated by professor of musicology and ethnomusicology Brittany Chase, Common was asked about his current role in the music industry.

“I’ve listened to Common’s songs since I was a kid,” Fleming said. “90s, 2000s R&B was my thing, so hearing him speak was really inspiring and honestly just incredible.”

VPB also hosted model, LGBTQ+ rights activist and “Euphoria” actress Hunter Schafer on March 30. She participated in a sold-out Q&A, which included questions from moderator Iggy Cortez, professor of cinema & media arts and English, and students from his class.

Schafer described how she had a childhood interest in illustrating superhero costumes, which evolved into her present love for fashion. In the same vein, Schafer said the internet is a great place for young people to express themselves and find a like-minded community, effects she said it had on her.

“The internet sort of became the first place I was really exposed to other people who seem to be experiencing the same feelings and shifts in identity, so I’m really thankful for it,” Schafer said. “I also attribute a good chunk of my career to Instagram, which is really freaky to say, but it’s true.”

For Schafer, fashion has also allowed her to express herself and escape the “rigid gender role” she was born into. As a transgender woman, she stated that trying on her sister’s dresses as a child was an especially powerful experience. Schafer said she has always been shy, but that modeling and acting in HBO’s “Euphoria” pushed her out of her comfort zone.

Schafer discussed her character on the show, Jules, who is a high school student and a transgender female. She particularly focused on the episode that she co-wrote with writer and producer Sam Levinson, speaking on her experience as a transgender woman and her belief

that labels only serve to oppress people.

“The way I experienced my transness, which is what we got into in the episode, is something that is more spiritual and amorphous,” Schafer said. “Transness, which is bigger and more beautiful and complex than one word, was an idea I haven’t really seen explored on TV in a sort of neutral context of a therapy session where she [Jules] is taking all the space and owning the conversation.”

During the Q&A session with students, Schafer expressed interest in seeing more transgender actors featured in major film projects. She said she is disappointed with recent anti-trans legislation in North Carolina, such as HB2 (passed in 2016 and repealed later that year), and how this bill inspired her to act against transphobia.

Schafer also advised students to “follow the dopamine” in regards to their future careers and to put effort into what they enjoy doing. First-year Maria Manabat said she enjoyed hearing about Schafer’s career and life experiences beyond her fame through “Euphoria.”

“I thought it was really great that she talked about how she brought her own experiences into her character, especially not having a background as an actor,” Manabat said.