No. 9 Vanderbilt falls to No. 1 Tennessee, 6-2, thanks to disastrous fifth inning

Vanderbilt was only able to muster six hits on Friday en route to a series-opening loss to the Tennessee Volunteers. 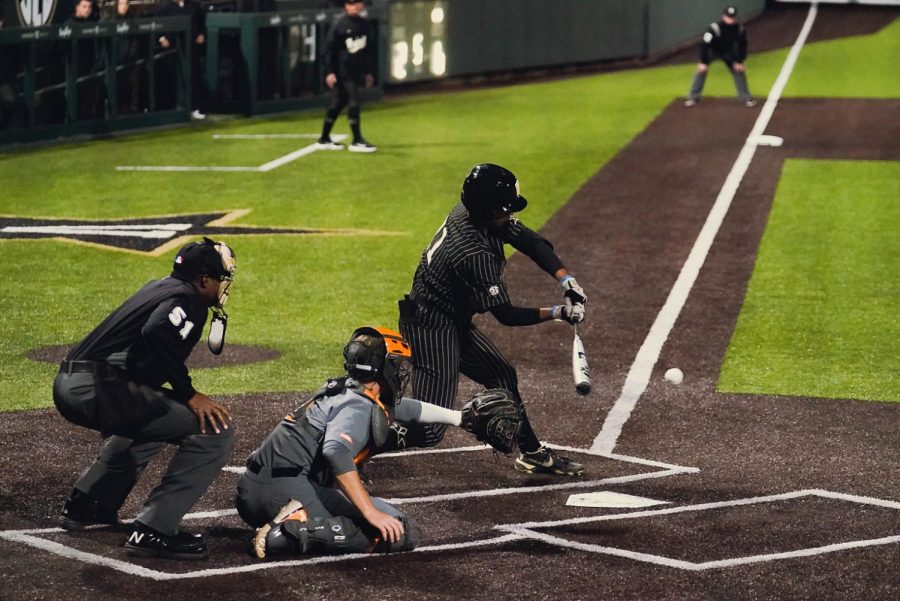 Illegal bats, fly balls lost in lights and more marked the series opener between in-state rivals No. 9 Vanderbilt (20-5, 4-3) and No. 1 Tennessee (25-1, 7-0) on Friday, and it was the Volunteers who claimed their program-best 17th straight win, 6-2, over the VandyBoys at Hawkins Field. The visitors used a disastrous fifth inning from Vanderbilt’s defense, another elite performance from freshman ace Chase Burns (W, 6-0) and a big day from outfielder Jordan Beck to claim the series opener.

Burns threw a strong 5 1/3 innings and struck out seven VandyBoys in the process. Vanderbilt’s Chris McElvain (L, 4-1) was dished his first loss of the year against the SEC’s best offense. His six earned runs make his outing look worse than it was due to a handful of defensive miscues from the hosts. But the Volunteers hit almost everything hard all evening in the win.

If the top-10 rankings drew you into Friday evening’s duel, then some first inning drama kept you hooked. After McElvain fanned Tennessee’s first two hitters, Jordan Beck took him yard for what appeared to be Tennessee’s SEC-leading 67th home run of the season. But upon further review, the umpires ruled Beck out because his bat had an expired inspection sticker on it that was not updated for this weekend’s series.

Statement from the SEC to ESPN:

“We didn’t plan to [have the umpires check bats]. There was a note that went out by the SEC about making sure that every bat had a sticker on it so we talked about it [before the game],” head coach Tim Corbin said. “They won the game. It took away a run, but they scored six.”

The home faithful’s excitement over the overruled homer was short-lived, however. Just two outs later, in the second inning, Tennessee’s Luc Lipcius struck first for the Volunteers with a two-run shot to right field.

The VandyBoys tallied two-out doubles each of their first two times at the plate but it took an Enrique Bradfield Jr. single in the third to get the hosts’ first run across. The sophomore singled up the middle and swiped second and third on consecutive pitches—his 17th and 18th steals of the year. Freshman Davis Diaz then tapped a grounder to second base to push him across and make the score 2-1.

Then came the fifth inning that did the home team in.

On two separate occasions in the fifth, Vanderbilt outfielders lost routine fly balls in the sky, possibly in one newly installed Hawkins Field light. The miscues led to a two-RBI double and an RBI triple and because neither ball was touched by outfielders, both were not ruled errors. After the triple, McElvain’s day came to a close with the score 5-1 before a Hunter Owen passed ball allowed one more run to score.

Vanderbilt used a bit more small ball in the fifth to push across one more run. After Javier Vaz walked, the VandyBoys advanced him to third before Carter Young knocked him home with an infield single to make the score 6-2.

Owen finished out the day for the VandyBoys, pitching 4 1/3 innings and striking out seven Volunteers. Vanderbilt stranded six runners on base throughout the game and only had multiple runners on base once all game—in the ninth inning. The teams combined for just 13 hits and but for the defensive mistakes from the VandyBoys, the result might have been quite different.

“We pitched well. That’s a very good offensive team. You have to give them credit—they have some big hitters, they have some strong hitters and they have some smart hitters,” Corbin said. “I thought [McElvain] put us in position early and [Owen] certainly did from the time that he came—he pitched very well. So they gave us a chance to come back but their pitching was better than our offense.”

The VandyBoys and Volunteers will meet in Game 2 of the three-game series on Saturday with first pitch set for 7 p.m. CDT.