The Commodores will look to bounce back as they prepare for the SEC Conference Championships. 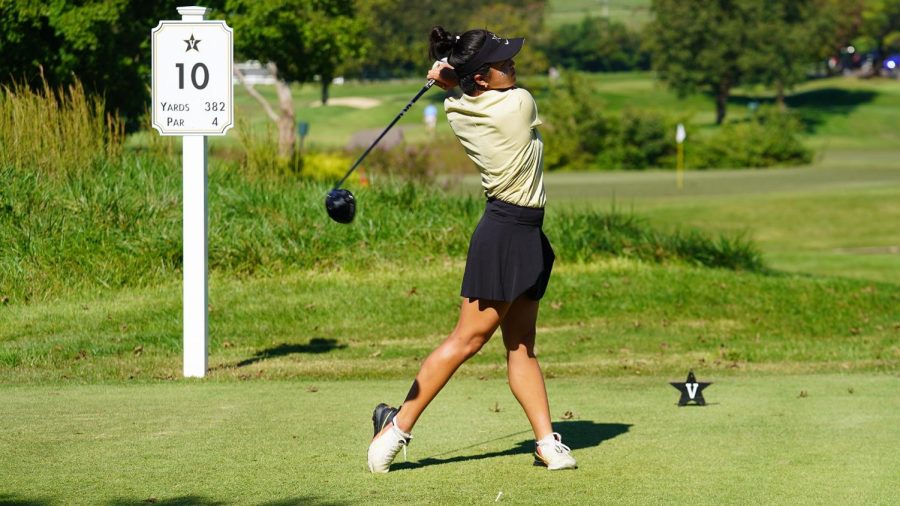 The Vanderbilt women’s golf team concluded their regular season with a 13th-place finish at the Clemson Invitational on Sunday. The Commodores battled a talented 17-team field featuring some of the best squads in the country, including No. 14 LSU, No. 22 Kentucky and No. 25 Illinois. Despite their underwhelming finish, Vanderbilt head coach Greg Allen believes his team is capable of competing with those teams when the postseason arrives.

“It feels like we’ve been putting into a hole the size of a thimble during the month of March,” Allen said. “We’re going to take a few days off and go into April with the attitude and energy as if it’s a brand new season.”

The tournament took place at The Reserve at Lake Keowee, a grueling 6,386 yard course that served as the longest the Commodores had to play on all season. Vanderbilt finished their time at The Reserve with a total score of 921, good for 57 over par and 30 strokes behind first place LSU. However, Allen does not attribute the challenging nature of the course to his team’s ultimate performance.

“I don’t think it was the length that got us. We were missing the greens too often, and when we did find the greens, we weren’t very good with our chipping and putting.” Allen said. “Those are some of the things we need to get better at heading into the SEC [championships].”

The Commodores began the invitational with a score of 304 in the opening round, tied for 10th place in the field. Junior Jayna Choi posted the best score for Vanderbilt that day with a 74. Unfortunately, extreme wind caused the Commodores to struggle on the second day of the tournament, as they scored a 313 (25 over par).

“There was actually a wind advisory that day,” Allen said. “We saw 20-30 mile per hour winds with gusts up to 50 [mph]. So it was definitely windy, but that was something every team had to overcome.”

On the third day of the tournament, the Commodores returned to form and tied for their best round of the tournament with a 304. Fifth-year senior Louise Yu led Vanderbilt with a 74 while fellow senior Auston Kim chipped in a 75 and junior Tess Davenport added a 77. Yu’s strong final round and team-leading 41 pars helped her to a top-30 finish; her three-day total of 228 was the lowest score of any Commodore. Sophomore Ariel Yu tied for 50th with a score of 232, while Choi and Tess Davenport finished close behind with scores of 233 and 234, respectively.

The Commodores will have some time off before turning their attention to the SEC Conference Championships on April 13. The event will be held in Birmingham, Alabama, at Greystone Golf and Country Club’s Legacy Course. Last year, Vanderbilt finished fifth in the SEC, as returning golfers Celina Sattelkau, Davenport and Louise Yu all finished inside the top 40.

Senior Auston Kim, who currently leads the team in scoring average (72.48), will be making her 3rd appearance at Legacy Course. Named to the 2019 first-team all SEC and Golfweek All-American teams, Kim finished tied for 16th at the tournament in her first season with Vanderbilt. One pandemic and an up-and-down junior season later, Kim is ready to lead the Commodores back to an SEC playoff. She is currently competing at the Augusta National Women’s Amateur, where she is in 32rd place as of March 30th.

The Commodores last won the SEC championships in 2014, but have advanced to the playoff round in every season since 2018.  Coach Allen is confident his team’s experience on Legacy Course will help them to repeat their past success.

“I truly believe in this team and I trust that we have what it takes to make it to match play at the SECs and to get to NCAAs at Grayhawk [Golf Club],” Allen said. “Strong golf in April and May can usually make you forget about poor golf.”