‘Our community was so invisible’: Activist and journalist Helen Zia speaks at roundtable and panel

Zia joined the Vanderbilt community for an event hosted by the AAPI Employee Affinity Group and the Asian American Advocacy Project on March 24. 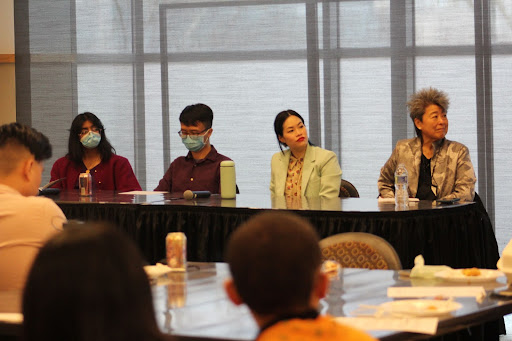 Organizers intended the event to be held in remembrance of the 40th anniversary of Vincent Chin’s death. Chin, a Chinese American draftsman living in Detroit, was killed in a racially motivated hate crime in 1982. Zia joined the Asian American civil rights movement that mobilized around Chin’s murder and is recognized for her activism involving civil and LGBTQ+ rights issues.

A combined 12 undergraduate and graduate students were invited to the roundtable, which began at 11 a.m. CDT. Sophomores Rohit Kataria and Angela Yan, co-directors of TAAAP, attended the roundtable and discussed TAAAP’s ongoing efforts, such as advocating for the establishment of an Asian American Studies major and for the university to hire more Asian American professors to teach the topic.

“Meeting Helen was so surreal. Talking to her gives me a lot of hope, and having her believe in us makes me believe in us more,” Kataria said. “Angela and I were talking to her and she said, ‘You guys are changing the world already.’ I was like, ‘I don’t know if she’s just being nice, but either way I’m going to go home and cry tears of joy right now.’”

Zia began the discussion by describing her path from activism to journalism, which began with community organizing work as an undergraduate at Princeton University. Zia then explained how her experience as an auto-worker in Detroit, Michigan, catalyzed her career in journalism.

“I got to know their [the auto-workers’] stories,” Zia said. “So what I learned then was telling people stories is the way to reach people and to make people care to see those people were just like any other people.”

At the time, “most of the people I met in the factory were not Asian. I only met one or two other Asian Americans,” Zia said. “Our community was so invisible.”

Zia also touched on how the advent of technology has caused growth and change within activism.

“When we organized, we had to actually do it face to face, reach people in front of supermarkets and at the corners and factories,” Zia said. “Where social change really happens in changing people’s hearts is still one-on-one.”

Yan stated that she resonated with Zia’s experiences as a queer Asian American and child of immigrants.
“Talking to Helen Zia at the roundtable discussion was like talking to a cool aunt. Just seeing parallels between my life and hers was super inspiring,” Yan said. “Hearing her stories about navigating her relationship with her parents, while building her own path as a badass activist, helped me see that there’s a way forward for me.”
First-year doctoral student and Korean Graduate Student Association Vice President Seulbin Lee also attended the roundtable discussion. She said she was inspired by how Zia left medical school to become a construction laborer and community organizer.

The panel event, which was open to the public, began at 12:30 p.m. CDT. Moderator Rev. Laura M. Cheifetz, assistant dean of admissions, vocation and stewardship and leader of the AAPI EAG asked five pre-submitted questions, then took questions from the audience. The panelists discussed topics such as how journalism impacted Zia’s activism, the diversity of the AAPI experience in general and solidarity between different minority groups.

Senior Varsha Nair also served as a panelist at the event. A double major in Medicine, Health and Society and African American Diaspora Studies, Nair was excited to see the turnout at the panel. She said she especially enjoyed engaging with topics about how to be a better advocate.

After the event, Zia visited undergraduate students from Shaw’s Race and the Environment in Asian America and the Pacific class to talk about intersectionality, a theme of the course.

“It was incredible to have Helen Zia attend our class,” Nair said. “I loved how she spoke about the very real reality of intersectional identities in spaces that are supposed to be open to the numerous identities that one can hold. I think she offers this model for advocacy work that respectfully disrupts, uplifts and overturns.”

TAAAP’s ongoing initiatives include advocating for the university to add more Asian American-owned restaurants to the Taste of Nashville, to hire more Asian American counselors at the University Counseling Center and to implement orientation modules about how to identify and address anti-Asian hate. Kataria and Yan also encouraged all students to attend educational events hosted by affinity organizations like theirs.

“We do have a lot of problems occurring within our community,” Yan said. “When you’re attending this panel in person, you’re hearing from multiple Asian Americans with different experiences and can get a lot more educated.”