The congressional candidate discussed the housing crisis, infrastructure and gerrymandering in Nashville. 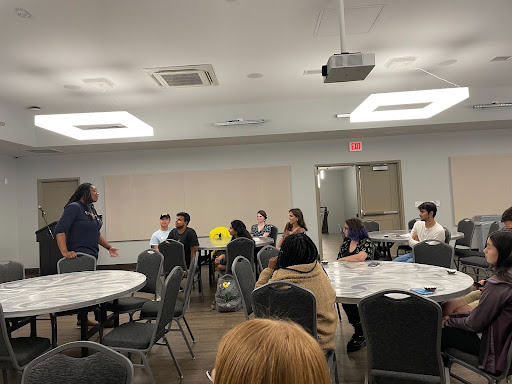 The Vanderbilt College Democrats (VCD) hosted an event on March 22 featuring Odessa Kelly—a Democrat running for Congress in Tennessee’s 7th District against Republican Mark Green. A Nashville native and community organizer, Kelly delivered a speech to around 20 students on the personal motivations behind her platform and her aspirations for Nashville’s future.

Odessa started the election season as a candidate in the Democratic primary against Jim Cooper in the 5th District, but transitioned to running in the 7th District after Tennessee’s redistricting took place and Cooper announced he would not seek re-election.

Kelly’s platform centers on progressive policies, such as single-payer Medicare for All and implementing the Green New Deal, while also emphasizing issues that disproportionately affect Nashville residents, such as rising housing costs, gentrification and the lack of affordable, public hospitals.

She began the event by describing her experience of growing up in a predominantly Black community in poverty.

Kelly went on to describe her experience as a city employee and FedEx worker struggling to make a living wage to support her two children. Despite the rapid growth in Nashville’s population, she said infrastructure failures prevented her and other working-class people from finding affordable housing.

To “take away every excuse for why they can’t promote you,” Kelly earned her master’s degree from Cumberland University in 2012. Afterwards, despite working in Nashville’s Parks and Recreation department, she still struggled to support herself.

“Here I am in a job deemed ‘necessary’ by the city, yet I’m living check to check,” Kelly said.

She described how members of her community experienced the same difficulties.

“I’ve been to 25 going away parties in the last seven years,” Kelly said. “These are teachers, social service workers, custodians, and they can no longer afford to live in the city they are working for. That is a fundamental problem.”

Soon after, Kelly co-founded Stand Up Nashville—a nonprofit organization centered around advocating for the city’s working-class and other marginalized groups. While proud of the work done by the organization, she cited frustration with the level of success the group has had as inspiration to run for public office.

“The barrier that we were all falling short in as activists in the social justice world is we would do all this work to get up to the line, then hand it off to someone who does not have shared values or shared experiences,” Kelly said. “I am just going to be a victim of this or am I going to do something about it?”

Kelly ended the event by reflecting on her campaign and its future.

“My goal is to get into Congress and buck the status quo,” Kelly said. “If we’re going to build something, we can’t be uncomfortable with challenging the status quo.”

Students said they enjoyed Kelly’s talk and hope to get involved with the campaign.

“I think this event went great. We’re really happy that Odessa Kelly was able to work with us,” VCD President and senior Bella Randle said. “I think she’s an inspiring candidate. We wish her the best in this election and hope to get her involved in future VCD events.”

“I felt she was a genuine person and she meant everything she was saying,” Williams said. “She’s exactly what Nashville needs.”