Memorial Minutes: An NIT run that was desperately needed

Jerry Stackhouse’s third season at Vanderbilt came to a close on Tuesday night in a loss to Xavier in the NIT. But he and his team showed that they are ready to make the jump to the NCAA Tournament next season. 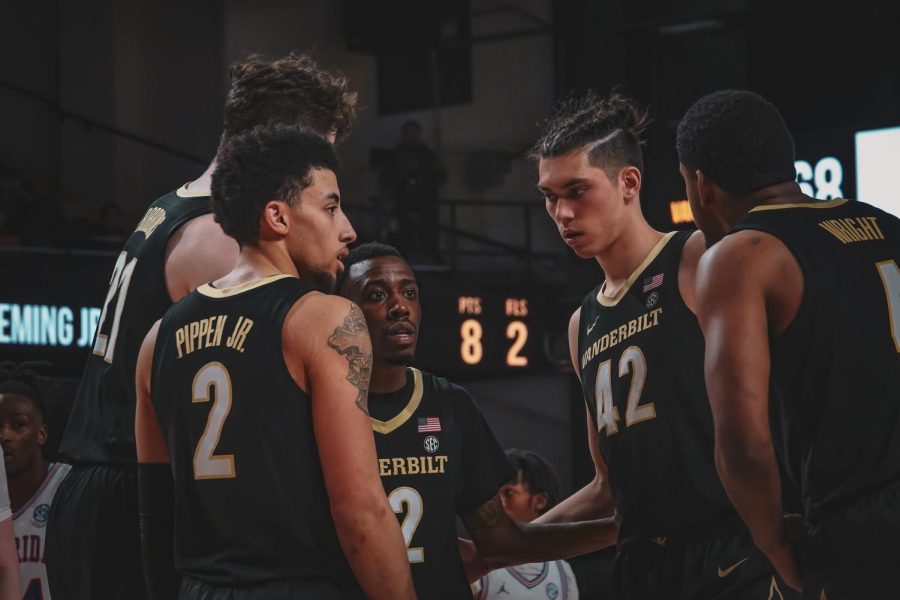 These emotions and more tell the tale of Vanderbilt men’s basketball’s 2021-22 season. They have, in large part, also been the key themes of Jerry Stackhouse’s first three seasons on West End. But finally, after a postseason run in the NIT and a season that concluded with the program’s first winning record since 2017, optimism and excitement appear to be the appropriate sentiments for the future.

The arc of Stackhouse’s tenure has featured various cycles of growth and momentum, both on an individual player and team basis. In his first year, he inherited a team that was 0-19 in the SEC. But by uplifting individual stars like Saben Lee, his team was able to win consecutive SEC games to finish the regular season. Then, the program took a massive step back, losing Lee and Aaron Nesmith to the draft.

Last season, Vanderbilt added to that momentum, but it took until early February to really see them hit their stride. They won three of their final six games, including their first SEC Tournament game since 2017 over Texas A&M. But a record of 9-16 amidst COVID-19 led to another step back: seven players transferred, including second-leading scorer Dylan Disu.

This year, the Commodores were able to find their stride earlier in the season and finish with more than just positive momentum. They finished by winning four postseason games, nearly clinched a bid to the NIT semifinals and notched their first winning record in five years.

Progress during the Stackhouse era has been more than stunted by injuries—five different regular starters over those three seasons have missed eight games or more. But regardless of injuries, for a program that was in the basement of college basketball just three years ago, it shouldn’t come as a surprise to see slow growth—program overhauls like that of Iowa State’s this year are the exception, not the expectation.

For perhaps the first time in the Stackhouse era, it feels like there is tangible momentum to build around this coming offseason. There is investment in place, talented young pieces on the roster, a deep recruiting class and coaching turmoil in the SEC that will work in Vanderbilt’s favor. After a winning season, barring injuries, there won’t be excuses for Stackhouse and company next season.
Running Out of Gas
With six minutes to go in Tuesday’s NIT Quarterfinals matchup, it appeared Vanderbilt was destined for a trip to Madison Square Garden. An 18-7 Xavier run to end the game squashed any hopes of that and left Commodore fans feeling the pain of yet another narrow defeat.

It marked Vanderbilt’s 15th loss—to just eight wins—in games decided by five or fewer points under Stackhouse. Many of those losses have been rooted in missed free throws in the clutch, key inbounding mistakes and a lack of shot creation from players not named Scotty Pippen Jr. But last night, Vanderbilt fell because of fatigue.

Jordan Wright stepped to the line with six seconds remaining and a chance to tie the game at 74. He missed the front end of a one-and-one and Vanderbilt’s season came to a close. The damage, though, was mostly done before this opportunity, as Vanderbilt converted on just two field goals in the final six minutes of action.

Tuesday’s matchup represented Vanderbilt’s sixth game in 12 days, and it showed. The lifeblood of the team, Pippen Jr., played 38 minutes, capping a stretch in which he played over 35 in 10 of 12 games. Rodney Chatman, who has nursed a hamstring injury most of the season, was coming off a 41-minute performance and clearly didn’t look himself. Add in Liam Robbins’ ankle troubles and general wear and tear on players who have not played over 32 games in one season in their college career, and fatigue was bound to set in.

But as good as Pippen Jr. was, Vanderbilt truly remained in the game because of guys like Myles Stute and Tyrin Lawrence, who are key pieces to this team’s future.

Stute, who finished the year with 79 made-3s at a 43% clip, saw his growth this season culminate in four big-time long balls in the second half. Lawrence, whose role decreased significantly when Chatman returned to the lineup, performed when called upon. He averaged almost six points per game during the postseason—nearly double his average—and proved to be a difficult assignment when slashing right-to-left against Xavier.

Individual player development has been commonplace under Stackhouse during his short tenure, and alongside that individual development has come improved team defense. The Commodores finished the year with a top-40 defense per KenPom, something they haven’t done since 2017. Stackhouse proved that his impressive X’s and O’s, which have followed him throughout his coaching career, extend to his defensive philosophies as well.
Thank you, Scotty Pippen Jr.
I don’t know if we have seen the last of Scotty Pippen Jr. in Black and Gold. But if we have, he has been a transformational figure in the trajectory of Vanderbilt’s rebuild.

If Tuesday was his last game as a Commodore, he leaves with 1,577 points—just 434 points away from Shan Foster’s record. He cemented himself atop Vanderbilt’s single-season scoring list with 736 points this year, would finish his career fifth in all-time scoring average at 17.5 points per game and eighth all-time in steals with 144. What a career.

“He has done everything that we’ve asked for him, and if this is his last game, he has had a hell of a career here for us and been a big part of what we have been able to accomplish to this point,” Stackhouse said after Tuesday’s loss. “I think if he comes back, he has a chance to become the most decorated player in Vanderbilt basketball history. And that says a lot.”

Most signs point to Pippen Jr. moving on with his basketball career—likely by going through the draft process and signing on with a G-League squad. But when he did ultimately decide to return to school after testing NBA Draft waters last summer, he said that he came back, “to win.” In what could be his final season on West End, he won more games than Vanderbilt has since 2017.

Stackhouse empowered him with the ball when he first stepped foot on West End, and that never changed—the junior started 89 of his 90 career games as a Commodore. He signed on to play for Bryce Drew largely because it was one of only two Division I offers he had. He remained committed to a new coach after watching Vanderbilt slog through an 0-19 SEC season. He hit a dagger 3-pointer against LSU in 2020 to end Vanderbilt’s 26-game SEC losing streak. He worked his way to First-Team All-SEC honors last season and repeated that this year. He watched his teammate and good friend Dylan Disu transfer out during the offseason yet still elected to return for his junior year. And finally, he brought the Commodores out of the doldrums of college basketball and into the national spotlight with an NIT run.

It wasn’t a glamorous career full of championships and a plethora of wins. But it fit who he has always had to be as a basketball player: a grinder.

He doesn’t quite have the physical tools of his legendary father, he didn’t have the well-rounded supporting cast that Vanderbilt greats before him had. But he put his head down, stayed poised and brought winning basketball back to West End. That deserves to be celebrated.

How does he want to be remembered if it truly was his last game?

“As someone that has changed the program,” he said.

He certainly has done that.

“I don’t know if it’s my last game,” Pippen Jr. said. “This isn’t the way I wanted to go out, but when you look back at it, there’s a lot of good things I did myself as well as this team. I just want to thank all the fans that supported me, the coaching staff and everyone that has been a part of my journey here. It has been a great ride, but we’ll see.”
The End of a Rebuild
When I was growing up, Vanderbilt was always a basketball school. I’ve been following Commodore basketball since 2007 when, as a kid that didn’t know much better, I chose a school with (formerly) one of the coolest logos in college sports to reach the Final Four as a No. 6 seed in my bracket. Then, Jeff Green traveled. But that’s not what this is about.

At age 11 I got a gold Vanderbilt Jeff Taylor jersey. Seven years after that, I attended my first game at Memorial Gymnasium along with thousands of other Commodore fans ready to see a pair of five-star recruits take the floor.

In a few months I will graduate as one of only two classes since 2000 to not see Vanderbilt compete in the NCAA Tournament at least once in their four years while on campus. I don’t expect next year’s senior class to experience the same.

The Commodores entered this year with the Big Dance on their minds. By early February, that probably wasn’t in the cards. But I’ll argue this: An NIT run was just what the Vanderbilt community needed to bring the magic back. There’s nothing like postseason home games, and wins against Belmont and Dayton reminded Commodore nation that students on this campus still very much care.

My class of seniors won’t soon forget the last few weeks on campus. There was a buzz in the air about basketball for the first time since our first weeks on campus—that’s exciting.

Losses hurt a lot more when games matter, and as painful as it is for Vanderbilt fans to digest a two-point, season-ending loss to Xavier in the postseason, it’s refreshing to see indifference fly out the window for so many Vanderbilt fans on campus and nationwide.

Thousands of students who didn’t understand what Memorial Magic even was got to experience it in primetime. Those who aren’t seniors will fondly remember how much fun can be had in Memorial when November rolls around next fall. Players like Jordan Wright and Myles Stute, who had never been able to hype up a rowdy crowd, got a taste of what that’s like and will be hungry for more of it next year.

“When you’re building like we’re building, you remember those tough moments. You remember those tough stretches of growth and disappointment that we had early on,” Stackhouse said. “We know that we don’t want to go back to those. So I think that’s the recipe—not wanting to feel those moments again and staying motivated and coming back and really taking another step in our development.”

If the core of this team returns—Wright, Robbins, Quentin Millora-Brown, Stute and others—they will remember the excitement elicited on West End this March. They will also remember the heartbreak of having their season end in a do-or-die showdown.

That plus a slew of talented incoming freshmen and potentially a transfer guard or two may just land Vanderbilt basketball back where it belongs next year, thus ending the rebuild that has defined the past three seasons.