The Mittal/Sasson ticket received 58.04% of votes, while Kayla Prowell and Chandler Quaile received 40.7%. 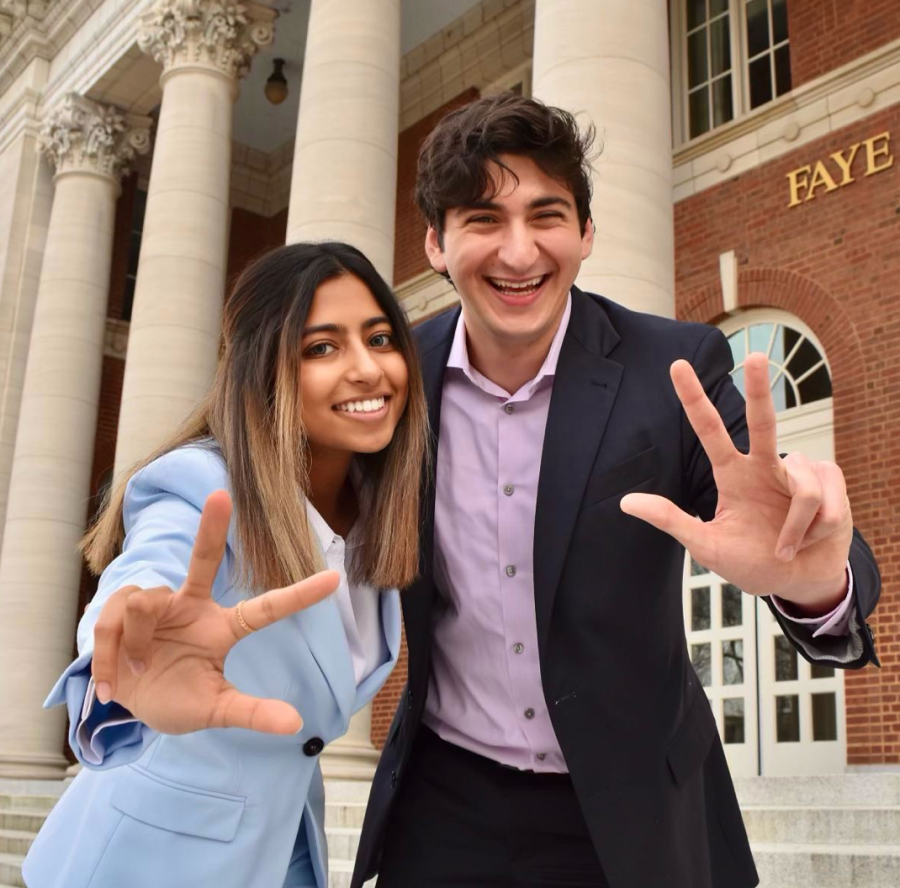 Screenshot of a photo of Amisha Mittal and Ari Sasson from their campaign Instagram account, as taken on March 23, 2022. (Hustler Staff/Sally Johnson)

Amisha Mittal and Ari Sasson won the VSG presidential election with 58.04% of the vote and will hold office for the 2022-23 school year, per a March 23 email from VSG. A total of 2,646 students voted in the election—the Mittal/Sasson ticket received 1,536 votes, the Kayla Prowell/Chandler Quaile ticket received 1,078 votes (40.7%) and write-in candidates received 32 votes (1.2%).

The Mittal/Sasson ticket ran on the four-pronged platform “RISE”: Responsibility, Inclusivity, Safety and Equity. Included in this platform were promises to push for fossil fuel divestment, in-person sexual assault prevention trainings for students and free on-campus printing. Sasson, a sophomore, noted that he is most looking forward to work toward divestment and the addition of off-campus VandyRide routes now that he has been elected vice president.

Mittal, a junior, emphasized that she wants to make sure everyone in VSG feels included in and excited about their work. She also intends to work on uniting VSG with the student body and increasing its transparency, a sentiment that Sasson echoed.

“I honestly look forward to having students know what VSG does and feel like VSG does stuff for them,” Sasson said.

The announcement of the Mittal/Sasson ticket’s victory comes on the heels of their campaign receiving a 24-hour suspension and 2% vote reduction issued by the Elections Commission on March 22 as a result of voter intimidation claims. This vote reduction was not ultimately factored into the final vote count as it would not have swayed the election results, per Speaker of the Senate and senior Bryce Collings.

“You can’t intimidate voters and then claim that the Elections Commission is biased against you when you’re punished for intimidating voters. Candidates will be better served thinking about the consequences of their behavior before they act and attack the Elections Commission for implementing those consequences,” Perry said. “The end goal is fairness, and you cannot illegally acquire votes and be upset when the elections commission implements fairness.”

Mittal described the overall election process as “ambiguous” and was disheartened by alleged personal attacks aimed toward candidates. She said she wants to help reform the election process to prioritize mental health, and Sasson further expressed his desire for a member of the faculty who doesn’t have a stake in the election to help oversee the process.

“We cannot wait to reform this process because there is a lot of room for bias and the rules are very vague,” Saluja said.

Moving forward from the election, Sasson acknowledged that 40 percent of voters did not support his ticket and he wants to ensure all voices are heard.

“I look forward to serving Vanderbilt as their student body vice president, and I look forward to making sure that all students on campus feel safe, feel respected and feel like their voices can be heard,” Sasson said.

Mittal similarly expressed excitement to take office as president and said she wants to help facilitate a transition out of the election season.

“After elections, the environment on campus can be very divided, and so one thing for me is making sure that we all really feel proud to go to Vanderbilt,” Mittal said. “Vanderbilt Student Government is a student organization, and it’s supposed to support all students.”