The Vanderbilt Commodores exploded for 27 points in the third quarter on Thursday to beat Murray State and move on in the WNIT. 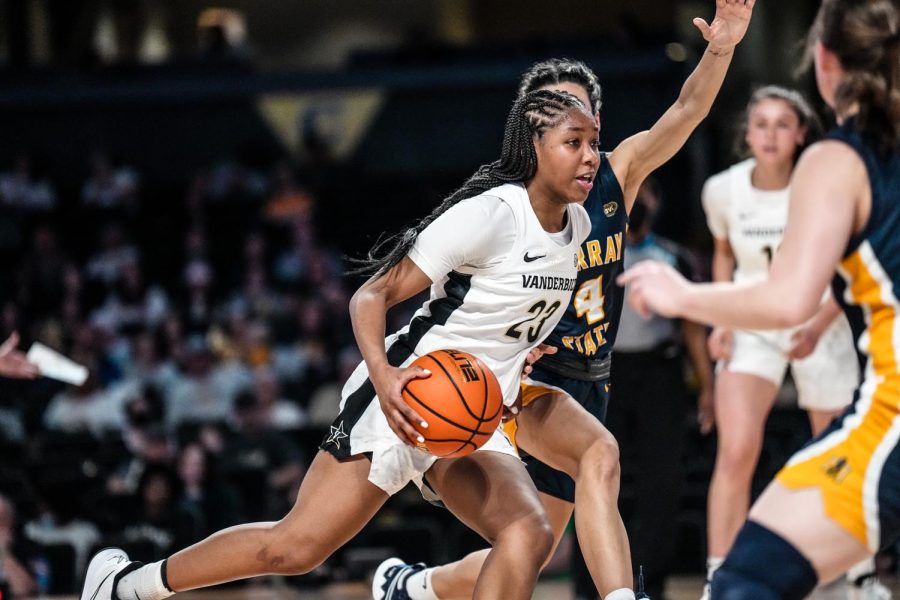 Vanderbilt guard Iyana Moore drives to the basket in the Commodores' WNIT game against Murray State on Mar. 17, 2022. (Vanderbilt Athletics)

The Vanderbilt Commodores (15-18) used a third-quarter explosion to keep their season alive in Round 1 of the WNIT on Thursday, beating the Murray State Racers (22-10) 73-47 at Memorial Gymnasium. The hosts outscored the Racers 27-14 in the third to jump into the driver’s seat after entering the halftime locker room tied at 28. They followed that up with an 18-point fourth quarter to finish off the visitors in swift fashion. The win gave the program its first postseason victory since the 2013 NCAA Tournament.

Head coach Shea Ralph and the Commodores were without leading scorer Brinae Alexander who is now in the transfer portal, but her sidekick Jordyn Cambridge was able to pick up the offensive load all evening. She notched a career-high 24 points on a career-high nine made field goals. She nailed five 3s, grabbed nine rebounds and dished out six assists as well during her career outing.

“Everybody understood that we were going to have to do a little bit more offensively,” Ralph said after the game. “I thought [Cambridge] played freer today. In shootaround today I came out on the court and she had made 15 3s in a row. I’m not surprised. For Jordyn, that’s the next step. She can do it, she just has to believe in herself to do it and then take those shots and make them. Today was huge for Jordyn’s development.”

The senior tallied 12 of her 24 in the opening ten minutes by canning a pair of 3s and getting easy buckets in transition to get the Commodores rolling. Vanderbilt’s always-stingy defense forced 23 Racer turnovers on the night and turned them into 29 points at the other end.

Cambridge contributed to the torrid first quarter pace, leading Vanderbilt to a 20-17 advantage after ten minutes. Murray State used three 3s in the first quarter to keep up with the home squad before a five-minute Commodore scoring drought in the second quarter helped them tie the game at 28 before halftime.

Murray State quickly jumped out to a six-point third quarter lead with a couple of 3s, but a subsequent 18-2 Commodore run helped them retake the advantage, 36-35, and Ralph’s team never looked back.

They ended the day with 32 points in the paint and held their opponents to 34% shooting from the field to boot. Freshman Sacha Washington played Robin to Cambridge’s Batman, scoring 16 points of her own and snatching six rebounds as well.

“It’s always awesome to be in the postseason,” Ralph said. “We’ve had our ups and downs all year. I really wanted us to have an opportunity to play in the postseason so the fact that we got it was exhilarating…You can’t look past one day [in March]. Teams that lose, you go home. It’s over. We live to see another day and that’s so exciting for this team. It’s been a joy to coach them all year.”

The Commodores will now continue their season against Liberty on Monday in Nashville at a time TBD.