The Commodores trailed 4-2 heading into the bottom of the ninth but put together a furious rally, led by Tate Kolwyck, to defeat the Wolverines. 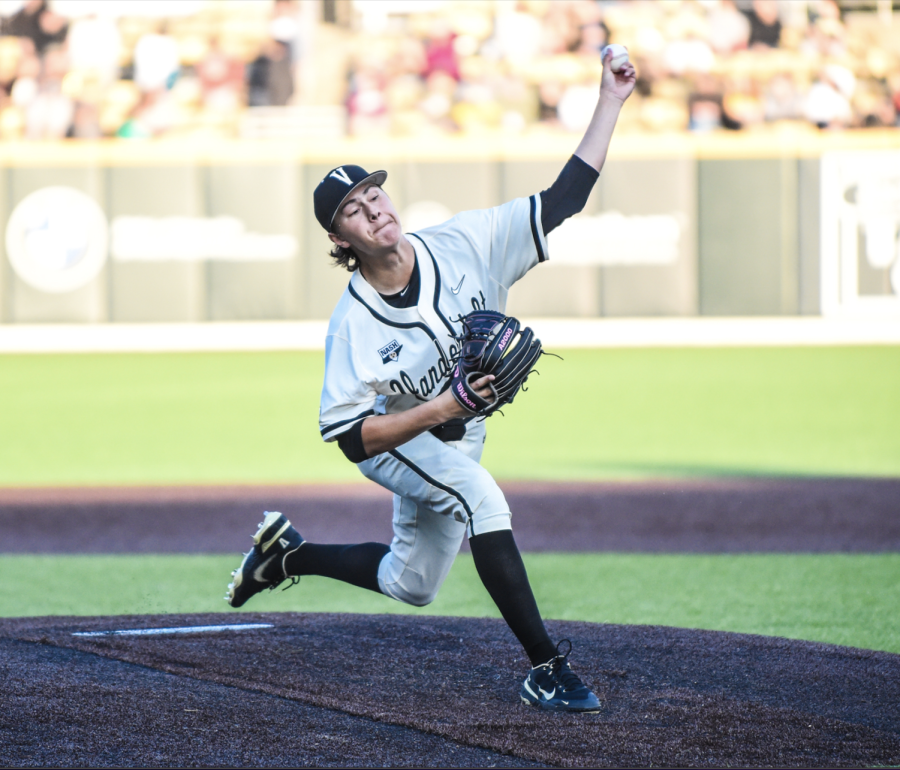 In the second rematch between the two teams since the 2019 College World Series, the No. 4 Vanderbilt Commodores (14-2) came from behind to defeat the Michigan Wolverines (8-8), 5-4, in walk-off fashion on Tuesday night at Hawkins Field. With the win, the VandyBoys extend their winning streak to 13 consecutive games.

“You’ve got to stay so localized in what you’re doing and just play the game for what it is,” head coach Tim Corbin said when asked how it feels to win 13 straight. “If you’re fortunate enough to win a few, then that’s great. But what you’re really doing is just chasing good baseball.”

Devin Futrell got the starting nod for the Commodores for the third time this season, making it through 3 1/3 innings before giving up a hit. He got through the first inning quickly, notching a strikeout and easily dispatching the first three batters for the Wolverines.

To start the bottom of the first, Enrique Bradfield Jr. reached first on a bunt that dribbled between the pitcher’s mound and first base. Then, Davis Diaz was walked, and after a strikeout by Spencer Jones, Bradfield Jr. stole third. With a man on first and third, the VandyBoys threatened early, but a double play ended the inning shortly after.

Bradfield Jr. helped keep the score tied, 0-0, in the second inning by securing a deep shot to the center field wall by Michigan’s Jimmy Obertop. Despite the early scare, Futrell forced an additional flyout, as well as a lineout, to get out of the second inning with relative ease.

In the bottom half of the inning, Gavin Casas had a leadoff single, and fellow infielder Carter Young quickly put him into scoring position with a single of his own. However, once again, the Commodores did not capitalize and came out of the inning without any runs.

The tide finally turned in the bottom of the third, however. After Futrell glided through the top of the inning with two strikeouts and no runs allowed, Bradfield Jr. hit a home run to deep right field to put the Commodores in the lead, 1-0. The VandyBoys were unable to expand on their lead after Jones hit a double that bounced off the Michigan center fielder’s glove, but nevertheless, they came out of the third with the lead.

To start the fourth, Futrell gave up his first hit of the day, a single to Michigan’s Matt Frey, but he also notched three strikeouts and quickly got out of the inning.

In the bottom of the fourth, the Commodores had ample opportunities to extend their lead beyond 1-0 but failed to do so. After an error by the Wolverines, Jack Bulger singled, then advanced to second on a wild pitch. Young and Tate Kolwyck were then each walked to load the bases, but two consecutive fielder’s choice hits to the pitcher (one by Javier Vaz and one by Bradfield Jr.) ended the inning, as Bulger and then Young were each thrown out at home.

In the fifth inning, the wheels came off for the Vanderbilt infield. Michigan’s Tito Flores doubled down the left field line and advanced to third on a passed ball. Then, Riley Bertram singled, knocking in a run, and stole second off a failed pickoff attempt. A fielding error by the Commodores kept the inning alive, and after a single by Clark Elliott, Bertram scored and made it 2-1 in favor of the Wolverines. A double play ended the inning, but the damage had been done.

The Commodores’ bats were silent in the bottom of the fifth, and Christian Little came in to relieve Futrell in the top of the sixth. Futrell finished with seven strikeouts and gave up four hits and two earned runs.

Little coasted through the top of the sixth, striking out two Michigan batters and registering a 1-2-3 inning, but Vanderbilt was once again unable to get anything going on offense in the bottom of the inning.

In the seventh inning, Little struggled, giving up two singles, throwing a wild pitch, and allowing a sacrifice bunt which, all in all, put the Wolverines up 4-1. With just one out, Nelson Berkwich replaced Little and finished the inning without allowing any more runs. Little finished with two strikeouts, allowing two earned runs after pitching 1 1/3 innings.

Down three runs in the bottom of the seventh, the Commodores put together a two-out rally that could have been more. Jones and Dominic Keegan each singled, and with two men on, Casas doubled down the left field line, bringing Jones home and cutting the Wolverines’ lead to 4-2. Bulger was then walked, loading the bases, before Young struck out and ended the inning.

After forcing a groundout to get the first out of the eighth, Berkwich, who pitched for one inning and did not allow any hits, was replaced by Jack Anderson. Anderson quickly notched two strikeouts to bring his team up to bat, still down two runs.

The Commodores threatened in the bottom of the eighth but once again came away empty-handed. With two outs, Jones came to the plate with Bradfield Jr. on second and Vaz on third but struck out, adding to the 13 total men left on base for the Commodores.

In the top of the ninth, Thomas Schultz came in to relieve Anderson, who finished with two strikeouts and no earned runs. Schultz got through the inning easily, giving his team one last chance to tie things up, down 4-2.

When all hope seemed lost, the VandyBoys responded, stunning the Wolverines in the bottom of the ninth. Keegan started things off with a single up the middle, and with one out, Rob Gordon, who replaced Keegan as a pinch runner, stole second. Then, Bulger was walked before Young hit a fielder’s choice to second base.

Thus, with two outs, there were men at first and third. Up next came Kolwyck, who delivered when his teammates needed him most. Needing a hit or walk to keep the game alive, he blasted a double to left field, advanced to third on a throwing error and brought Gordon and Young home to tie the game, 4-4. Then, on a wild pitch, he made a mad dash towards home, narrowly beating out the throw and sealing the 5-4 victory, against all odds, for the Commodores.

“They were throwing at home, and I saw the ball slip out,” Kolwyck said. “I was like, ‘we’ve got to take this right now.’ I’ll take the game.”

Up next, the Commodores begin SEC play, as they welcome the Missouri Tigers to Hawkins Field for a three-game series beginning Friday, Mar. 18 at 6 p.m. CDT.