For the first time since 2015, Vanderbilt claimed a postseason victory by beating their Nashville neighbors, the Belmont Bruins, at Memorial Gymnasium on Tuesday night. 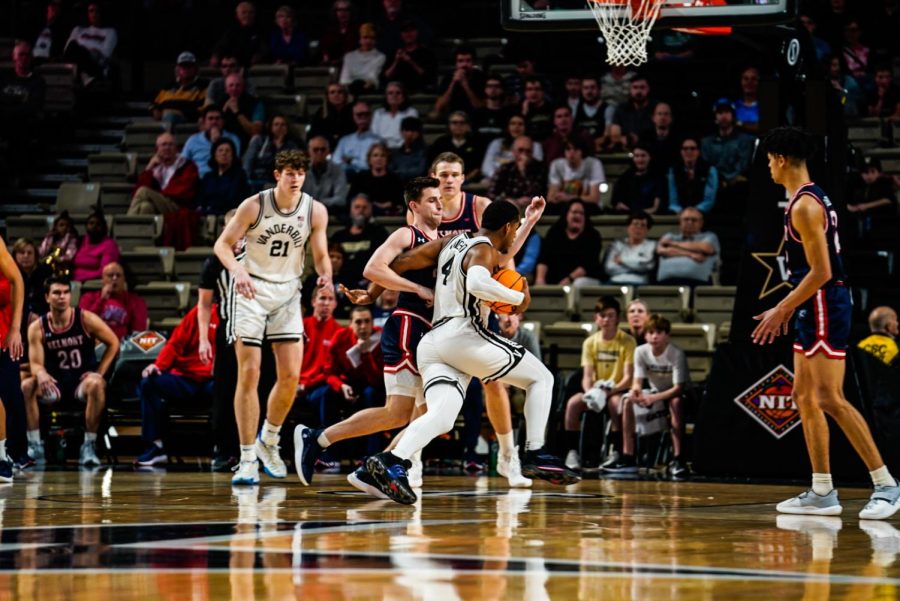 Vanderbilt guard Jordan Wright drives against Belmont in Round 1 of the NIT at Memorial Gymnasium on Mar. 15, 2022. (Hustler Multimedia/Miguel Beristain)

In his first taste of postseason action, Vanderbilt junior Jordan Wright propelled his team to an 82-71 victory over the Belmont Bruins (25-8) in front of the best crowd of the year at Memorial Gymnasium. The Commodores (18-16) took down their Nashville neighbor Belmont in Round 1 of the National Invitation Tournament (NIT) and will move into Round 2 this weekend against either No. 1 Dayton or Toledo.

In the Nashville matchup’s seventh rendition—a series that Vanderbilt now leads 6-1—Wright tallied 24 points and seven rebounds, which helped Vanderbilt mitigate an impressive shooting effort from the Bruins. Belmont got 22 points from Will Richard and hit eight 3s as a team, but Vanderbilt’s 42-28 edge in the rebounding battle helped them prevail.

Liam Robbins added to Wright’s big day with 14 points, six rebounds and three blocks. Alongside Quentin Millora-Brown, Robbins helped hold one of the Bruins’ leading scorers Nick Muszynski to just 6-of-16 shooting from the field and forced him to shoot four 3s where he shoots just 19%.

“It was a big thing for us to push him off the block and get him outside of his comfort zone,” Millora-Brown said. “That was kind of the key for us—making sure he wasn’t catching it in his go-to spot.”

The visitors from down the road played their typical form of fundamental basketball that led them to a semifinal finish in the competitive Ohio Valley Conference. Belmont hit nine of their first 13 shots to jump on Vanderbilt in the first 10 minutes. A 3-of-3 stretch from beyond the arc and six early Commodore turnovers fueled a 24-12 lead for the Bruins midway through the opening 20 minutes.

“Those guys are some of the best cutters in the country, honestly,” head coach Jerry Stackhouse said. “They have elite cutters and they get those backdoors and we talked about them so it was a bit frustrating when we gave up a few of those early in the game.”

The middle of the first half became a slog before Stackhouse got his starters back in the game at around the five-minute mark. A 13-3 Commodore run just before the final media timeout of the first half erased what was, for most of the half, a double-digit Belmont lead. During that stretch, Wright exploded for four straight buckets and eight of his 15 first-half points, much to the delight of a full Vanderbilt student section.

After that run, Vanderbilt took the halftime lead, 39-38, on a last-second putback from Millora-Brown, despite trailing for most of the opening frame.

“After not playing well and to have a one-point lead [at halftime], I thought that was a huge momentum play for us,” Stackhouse said.

The second half began with the teams trading blows. At one point, Vanderbilt jumped into the driver seat with a 51-46 lead, but neither team was able to seize control.

A 10-2 Vanderbilt spurt ensued, thanks to a few buckets from Tyrin Lawrence and a big 3 from Jordan Wright, which put the Commodores up 64-56. Belmont fought tooth and nail to regain the advantage with a plethora of backdoor cuts and 3s, but it wasn’t to be.

For most of the game, the Bruins held First Team All-SEC guard Scotty Pippen Jr. in check. With 11 minutes remaining, Vanderbilt’s leading scorer had just two points. But with a huge and-one conversion just before the final media timeout and a couple free throws, the Commodores’ go-to scorer put his team in the driver seat late and closed the door on Belmont.

The win marked Vanderbilt’s first postseason victory since the 2015 NIT and ensured that the Commodores will finish with a winning record in 2021-22 for the first time since 2017.

“The energy in our building was unbelievable tonight. I want to give a big shoutout to our sixth man, our fans were unbelievable. Our students, they really came out and their energy was big even before the game started,” Stackhouse said. “I thought that was a big lift for us and helped us get over the hump.”

The Commodores’ season will now continue this coming weekend. They will await the winner of No. 1 Dayton and Toledo as their next opponent and regardless of who wins that matchup, Vanderbilt will host a second round game in Nashville at a time TBD.