‘Hold white students accountable for their racism’: Banner in response to Chabad event taken down, replaced

Following Chabad's speaker event, a banner was hung outside Rand in solidarity with the ASU and the ISO who allege that the event spread racist and anti-Indigenous rhetoric. The banner was taken down but was later remade and guarded overnight by students. 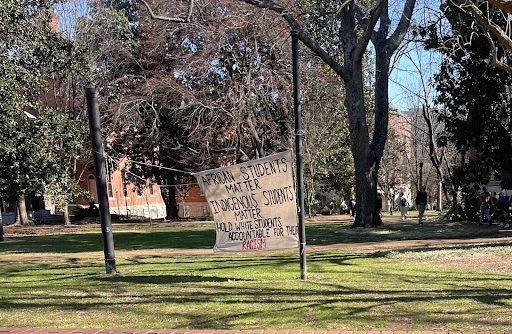 UPDATED: This story was updated on March 26 at 12:20 p.m. CDT to include a comment from a member of the Jewish community.

The original banner was supported, but not visibly sponsored, by ISO and the African Student Union (ASU). It read: “African students matter. Indigenous students matter. Hold white students accountable for their racism.”

Following the Rochman event, the ASU and the ISO posted a joint statement on Instagram, alleging that Rochman made racist and anti-Indigenous comments as well as harmful generalizations about Nigeria during the event. The statement also demanded a public apology from Chabad.

The banner was a gesture of solidarity with the statement. Bruns said that she and Stringer notified the ASU and the ISO to confirm their support of the banner’s message before hanging it.

The original banner was taken down on the morning of March 3, as posted on Twitter by Bruns. She said she emailed VUPD asking to see security footage to determine who had removed the banner. According to Bruns, VUPD responded by stating that the banner was removed by the authorization of the Office of the Dean of Students (DoS).

“I cannot think of any reason that you would take down a banner that says that your students matter and is trying to bring a sense of accountability for racist students on this campus,” Bruns said.

Vice Provost for Student Affairs and DoS G.L. Black said in a March 3 email to The Hustler that the banner was taken down because it violated the Student Handbook, which states that any display of printed material must provide the name of an associated individual, department or organization registered with the university.

“​​The banner was removed because it did not have any information indicating it was from a registered student organization, university department or individual affiliated with the university,” Black said.

A Jewish student who attended the event said members of Chabad were originally accused of removing the banner. The student is being kept anonymous for protection from personal threats.

“We didn’t receive an apology from people who accused us of taking down the banner,” the student said.

After creating a new banner with visible attribution to the ISO, students primarily from the ASU and the ISO sat by the banner and guarded it without pause from March 3-4. The second banner was identical to the first one except “white students” was replaced with “white Vandy” and “-ISO” was added to visually attribute the banner to the ISO.

Sophomore Omotayo Fasan, one of the students who guarded the banner overnight, also said it was disappointing that the DoS removed the banner.

“For that poster to be taken down by the DoS in the middle of the night instead of acknowledging that we are being harmed is even more disgraceful, especially for a school that teaches diversity, equity and inclusion,” Fasan said.

Bruns, who sat overnight with the banner, said that she and the other students who guarded the banner were approached by VUPD officers at around 5:30 a.m. CST.

“[VUPD] said they came out there because they received phone calls about complaints,” Bruns said. “I would be interested to know who called the police on Black and brown students for exercising their first amendment rights and rightfully calling out the racism on this campus.”

Bruns and Fasan also allege that one of the officers rested their hand on their gun, and Bruns said the officer “threatened to come back and escalate the situation” if the students did not remain peaceful.

VUPD did not respond to questions concerning these specific allegations, but a university representative sent The Hustler a message regarding the situation.

“During their routine patrol of the campus, VUPD officers happened upon students, some of whom appeared to be sleeping outside, near a banner in front of Rand Hall at around 5:30 a.m.,” the statement reads. “Given the hour, and that officers did not expect to find people sleeping in the area, they checked in with the students regarding their safety and welfare.”

Stringer said she was disappointed with the administration’s lack of transparency in removing the banner.

“We need the administration to also release a statement about that poster being removed,” Stringer said. “Every single day that goes by that no one says anything, it’s honestly disrespectful and it’s disheartening to know that we don’t really matter on this campus.”

Stringer stated that the banner removal is reflective of the university’s alleged disregard for Indigenous students.

“I think it just goes to show that this type of ignorance trickles down from the very top, from the chancellor failing to establish this land acknowledgment, all the way to the racist attacks and verbal abuse of its students,” Stringer said. “It’s not just an individual case, I think it’s more of a case study of how Vanderbilt University is complacent towards the erasure of history here.”

As of March 5, the banner was taken down for a second time to comply with the university’s Spring Break policy.

“We will clear out all remaining banners and fliers, including those on bulletin boards, during spring break as we do every year,” Black said in his March 3 email to The Hustler.