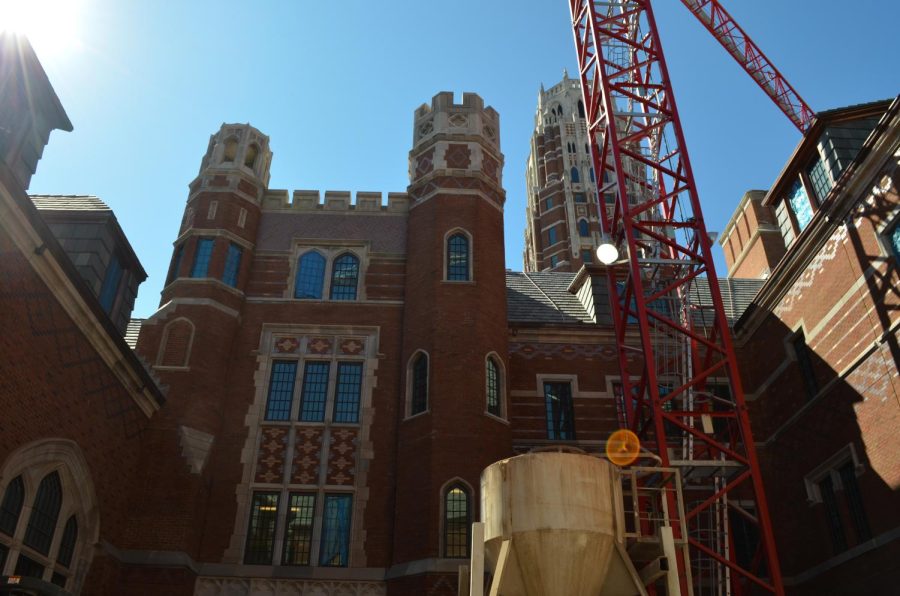 Rothschild College from the perspective of a courtyard inside the college, as photographed on March 1, 2022. (Hustler Multimedia/Alex Venero)

The Hustler took a tour of the unfinished Rothschild College, the latest edition to the university’s West End expansion, on March 1. Around 333 students will call Rothschild home beginning in Fall 2022.

Sean Farrell, construction manager with Layton Construction Company, LLC, and Bob Grummon, project manager with Campus Planning and Construction, led the tour. Despite the recent on-site worker death and the COVID-19 pandemic, they stated that the completion schedule for Rothschild has remained unchanged.

The front entrance of Rothschild will be located between Kensington Place on Greek Row and West End, as is the entrance of Nicholas S. Zeppos College. There will be a separate entrance to the full-scale dining hall, which will be accessible to all students.

The dining hall will be located behind the Phi Kappa Psi fraternity house. Grummon said the dining hall will seat approximately 150 students and will be open for breakfast, lunch and dinner. The Office of Housing and Residential Education (OHARE’s) website states that Rothschild Dining Hall will be all-you-can-eat style. Rothschild will also house a Munchie Mart and Grab&Go shop.

In a statement emailed to The Hustler, Campus Dining said it does not anticipate delays in opening Rothschild Dining Hall and Rothschild Munchie Mart due to the ongoing dining staff shortages. It also stated that exact operating hours and special dining offerings are still being decided and will be based in part on the Spring 2022 Dining Survey, which is set to be released in early April.

Farrell said the interior design of Rothschild Dining Hall is unique in that it has “fancy, high-end” finishes. According to Grummon, this stylistic choice reflects how the construction and planning teams intended for each new residential college to have its own identity.

“Although the theme is very similar [to the other residential colleges] on the exterior—being gothic—the interiors all have a different approach as to how their finishes look,” Farrell said. “This one has really high-end ceramic tile for flooring and walls, really setting this [dining hall] servery apart from other serveries.”

Farrell explained that the Great Room and the lobby will share the same “high-end” details as the dining hall and that workers are currently beginning to install these finishes. He also said the steel windows in the dining hall and main areas were handmade for the college by the same company that was commissioned by the U.S. government to renovate a hangar from the attacks on Pearl Harbor.

The main floor of the Great Room will be available to all students, but the upper floor will serve as a student common space accessible only to Rothschild residents. Residents will also have exclusive access to the three courtyards within the college, which will feature grass and sidewalks.

Farrell said the bedrooms will be comparable to those in other residential colleges, with single-occupancy rooms measuring approximately 120 square feet. There will be four residential floors consisting of two halls: Red Oak Hall and Maple Hall.

Students will be housed in singles, doubles and four-person suites, which will include a kitchen, common space and four singles. The singles located in four-person suites will be around the same size as stand-alone singles, according to Grummon. While the number of windows in each room/suite varies, Grummon said each common area and bedroom will have at least one window.

Each residential floor will feature two lounges and additional “study nooks.” Grummon said the study nooks will be card-accessible to residents only, while the lounges will be open spaces. Residential floors will also have a variety of bathrooms, with around half being gender-neutral, single-user and half being multi-user. Water fountains and bottle fillers are also being installed on each floor.

The hallways in the residential floors of the college will be carpeted, while the rooms will have laminate flooring like other residential colleges. Farrell said the hallway rug will be put down in sections to allow for long-term maintenance and easy removal if necessary.

“I assume they’re in the process of finding the person if they haven’t already,” Grummon said.

A reservable black box theater—a simple performance space—will also be located in Rothschild and will be open to all members of the Vanderbilt community. Grummon said the space will hold approximately 130 people, and he anticipates that it will be used in part for theater courses.

The lower level of the college features a kitchen and music practice rooms accessible to residents, in addition to an open common space. The laundry room is located in the basement of the building and includes 20 laundry units.

“[That number is] perfect for a building this size,” Grummon said.

Reflection on West End construction as a whole

Farrell emphasized how the construction team and the university have worked to increase the campus’s energy efficiency. He said the piping for the West End residential colleges was reworked before construction on Zeppos College, the first new college to be built, began.

“You don’t have as much machinery to heat these rooms and cool these rooms,” Farrell said. “[Rothschild] has a high degree of energy conservation, pollution control and long-term stability for the building because you don’t have equipment that has to get replaced.”

Farrell and Grumon both expressed pride in the progression of the West End renovations as a whole.

“All of West End, all the way down: The university has changed its entire look,” Farrell said.