The Vanderbilt Commodores claimed their first SEC Tournament victory since 2016 on Wednesday, beating the Texas A&M Aggies in the tournament's first round. 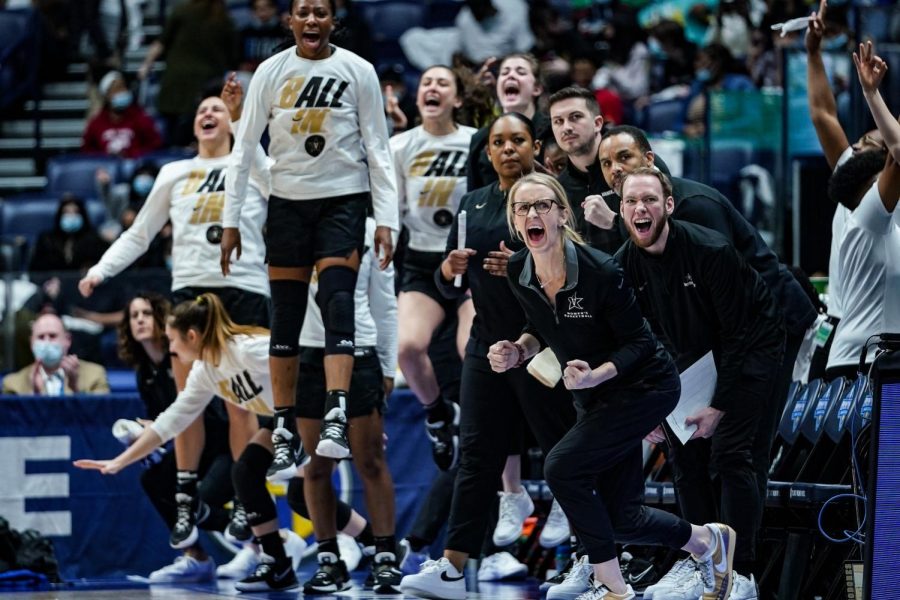 Vanderbilt bench celebrating a made shot during the first half of their SEC Tournament game against Texas A&M on March 2, 2022. (Vanderbilt Athletics)

Vanderbilt (14-17, 4-12), the hometown team of the 2022 SEC Women’s Basketball Tournament, kicked off the week’s festivities on Wednesday morning in Nashville. And they did so with a bang. Behind a roster that features four Tennessee natives, head coach Shea Ralph and No. 13-seeded Vanderbilt sent No. 12-seeded Texas A&M (14-15, 4-12) packing with an 85-69 win in front of a lot of Black and Gold at Bridgestone Arena.

It was a complete performance from Ralph’s Commodores as her All-SEC freshman duo of Sacha Washington and Iyana Moore got the day started and her Nashville-native seniors Jordyn Cambridge and Brinae Alexander brought Vanderbilt home.

Alexander scored 18 of her 23 points in the second half—including the most important bucket of all, a 3-pointer that gave her lifelong friend and teammate Cambridge a triple-double, the first in Vanderbilt women’s basketball history. Cambridge finished with 13 points, 10 assists and 15 rebounds, doing everything she could to keep Vanderbilt’s season alive. The de-facto home team outworked the Aggies all night long, won 50-50 balls and dominated the rebounding battle 49-30—24 of which were offensive rebounds—to claim the victory.

“There was like 56 seconds, Coach Kev [DeMille] just said, ‘You need one assist.’ He didn’t know what it was for, but I was, like, ‘Okay, one assist.’ So I told my team, ‘Y’all, I need one assist.’ Everybody is like, ‘Okay. We’re going to get it,'” Cambridge said of her triple-double. “They kind of trapped me a little bit at half-court, and Brinae was wide open, so I just kicked it up and I kind of watched the ball go in the air…It was definitely a really good feeling. I didn’t know it was the first in school history, but that’s pretty awesome.”

THE BUCKET THAT DOES IT – a Brinae Alexander 3-pointer. Cambridge with the triple-double: 13 points, 14 rebounds and 10 assists.

VU beats Texas A&M 85-69 and moves on in the #SEC Tournament! https://t.co/BiVAufYPPs pic.twitter.com/Cl6JgcLlq2

Vandy United was on full display on Wednesday in Nashville. With notable attendees Chancellor Daniel Diermeier, athletic director Candice Storey Lee, football coach Clark Lea, and men’s basketball forward Quentin Millora-Brown in the stands, Ralph and the Commodores got a first-round SEC Tournament victory—something that had eluded the program since 2016.

“I’m just really proud of our team. We’ve been fighting all year,” Ralph said after the win. “I talk with them every day about trusting the process and believing in each other and investing in each other and knowing that the results may not come that day or the next week or the next week, but eventually we’ll see them. I think that right now we’re peaking at the right time. You want to be playing your best basketball in March. This team did something special today.”

Vanderbilt kicked off the tournament with a barrage that set the tone for the game: a 15-6 run catalyzed by Washington and Moore. Washington finished two layups before Moore flipped in an and-one layup and buried a 3-pointer that set the Commodores on their way.

Alexander, Vanderbilt’s leading scorer, didn’t tally a bucket for the first nine minutes of Wednesday’s contest but it truly didn’t matter. Ralph’s team blitzed the Aggies with their patented ferocious defense and an elite display of first-quarter shotmaking. They connected on 12 of their first 16 looks as Moore totaled 14 of her 18 points in the opening ten minutes alone, leading Vanderbilt to a 29-10 lead after just one quarter.

A combination of Commodore turnovers and free throws at the other end helped the Aggies cut slightly into the Vanderbilt lead in the second quarter. But Demi Washington finished the second ten minutes with a pair of layups, four of her 12 points on the day, to send Ralph’s team into the locker room with a dominant 18-point advantage.

It was only a matter of time before Alexander heated up for the Commodores and the anchor of Vanderbilt’s offense all season long got hot in the third. Thanks to quality ball movement and her quick trigger, she buried four triples in the final 20 minutes of action to bring Vanderbilt home.

Probably not going to want to leave her open.

That's two triples for Brinae Alexander so far in this second half thanks to really nice ball movement. She's up to 13 points.

Texas A&M cut the Commodore lead to as little as six early in the fourth quarter, but Vanderbilt was able to hang on thanks to constant answers from its upperclassmen who were determined to keep their seasons alive. Alexander drained a key 3-pointer following an Aggie run and Cambridge was relentless on the other end in every way imaginable.

With the win, the Commodores will be back in action on Thursday against Florida at 2:30 CST. Vanderbilt bested the Gators in their regular season home finale just one week ago.