“The Batman” is the epitome of what superhero movies can become

An early screening and roundtable with the cast proved to me that "The Batman" not only rivals previous iterations in the DC franchise, but perhaps overtakes them. 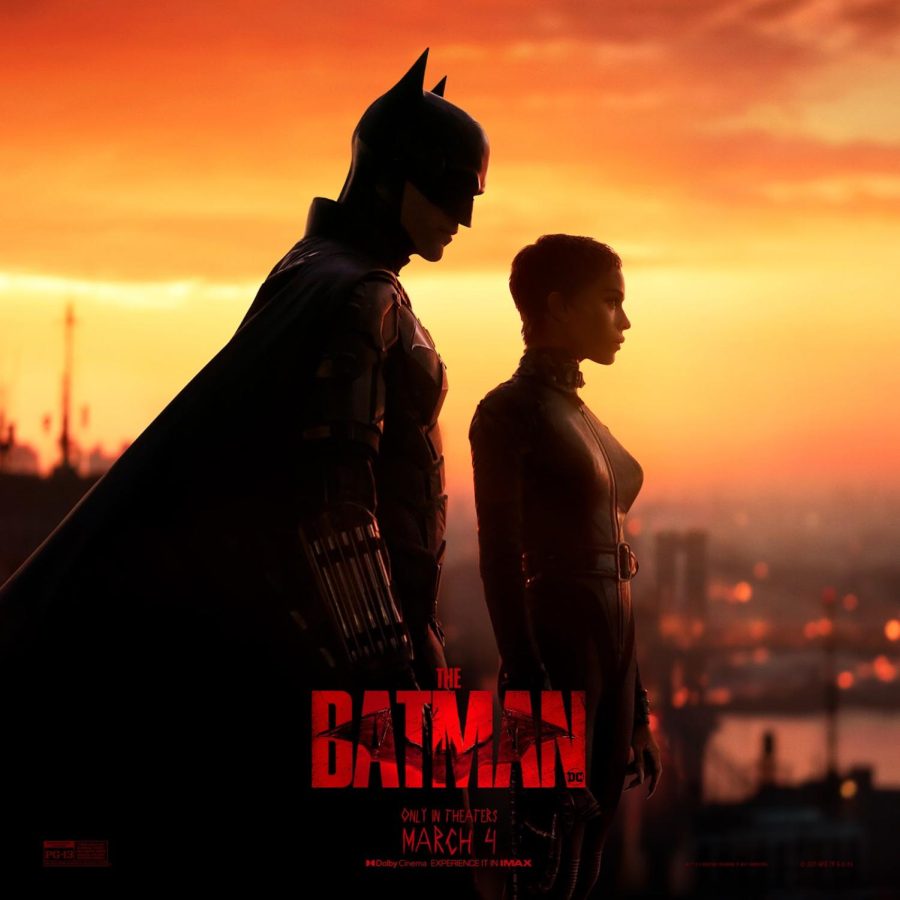 Robert Pattinson and Zoë Kravitz as Batman and Catwoman in “The Batman.” (Photo courtesy of Warner Bros.)

There’s been a number of iterations of our beloved superhero.

Batfleck stole viewers’ hearts (not mine) with his performance, while Christian Bale established himself as one of the most iconic Batmen with his charisma in the Nolan trilogy. Now “Twilight” survivor Robert Pattinson takes up the mantle. His performance—and everything else in this movie—work in unison to make “The Batman,” in theaters March 4, one of the best superhero movies of all time. Yeah, I said it. All time.

“The Batman” is more of a detective thriller than a superhero flick. Comparisons made to “Se7en” are not unjustified; the influences of the Fincher movie (and other such films) are uncanny in director Matt Reeves’ iteration. The movie follows a younger Batman (who goes by the name “Vengeance” for now) and a pre-Commissioner Gordon (Jeffrey Wright), who attempt to solve the mystery of The Riddler, a serial killer who plants riddles at his crime scenes in a very “Se7en”-esque manner. All the murders seem connected to each other and many of Gotham’s most influential people—even Bruce’s own family, the Waynes. “No more lies,” read the words that the Riddler writes on every victim, raising suspicion in the viewer about who the real villain is.

A superhero is not a superhero without a worthy adversary, and the Riddler is more than worthy. Paul Dano, in usual Dano fashion, is chilling and creepy as the movie’s main antagonist, leaving previous non-Joker Batman villains in the dust. The parallels between Batman and the Riddler are sprinkled throughout the three-hour runtime, muddling the morality of what’s right and what’s wrong. Both are orphans, both live in the darkness, watching, and both want to make Gotham better in their own way.

As the plot unravels, we realize that the Riddler wants nothing more than to expose the corruption inherent in Gotham’s government and make those responsible for the corruption pay. He goes after the heavy-hitters: the police commissioner, the mayor and Bruce Wayne himself. At the end of the movie, the Riddler admits that Batman’s intervention and solutions to the riddles was part of his plan all along. Batman was merely the physicality he required to bring the truth about Gotham’s leaders to light before he turned himself in (again, turning himself in is very “Se7en”-esque). The plan was in motion the whole time.

The interconnectedness of our superhero and villain is what makes their interactions so gripping, so much in fact that in some scenes I couldn’t even tell which one was hidden in the shadows. The Riddler yells at Vengeance for never experiencing being a true orphan in his ivory tower overlooking the city. His experience was true orphanhood, he claims, living with thirty other kids in a room infested with rats that was freezing in the winter. All of this, he alleges, is because Thomas Wayne, Bruce’s father, promised renewal in the city, but died, leaving his fortune to be picked at by Gotham’s higher-ups like vultures, used for bribes and power struggles. The grandeur of his plans also rivals that of previous Batman villains as he floods the city by bombing the coastline after commiting his series of murders.

Reeves commented on this relationship in a roundtable I attended, which featured himself and most of the primary cast.

“I love the idea that you can’t really have Batman without his rogues, and you can’t have this Riddler without Batman,” Reeves said.

Other villains also hold their own in this movie. Colin Farrell is evil but semi-goofy as the Penguin, right-hand man of Carmine Falcone, played by a slick and suave John Turturro. And I can’t forget about the biggest villain yet, momentarily introduced at the end, setting up the sequel. Yep, you guessed it: The Joker is back. This time, he’s portrayed by Barry Keoghan, a brilliant young actor who is the perfect fit to play the early days of the great Batman villain. His laugh in this movie is the best Joker laugh I’ve heard so far, managing to give me goosebumps within his limited time on screen.

I had some issues with our protagonists, albeit minor ones. Let’s start with Commissioner Gordon, who was one of the highlights for me of the Nolan trilogy. Even though Jeffrey Wright is an amazing actor, his portrayal of Commissioner Gordon felt forced. It seemed like he was trying to do too much with the character, making us wonder if the movie would be any better with Gary Oldman’s Gordon we came to love. I have no comment on Andy Serkis’ Alfred, besides that he was fine. Catwoman, on the other hand, is probably the best Catwoman I’ve seen—and I don’t just say this because I’m in love with Zoë Kravitz. I am in love with her, but that’s beside the point.

Kravitz absolutely killed it as Selina Kyle, showing off the character’s charisma, sensuality and strength in the most badass way possible. Her relationship with Batman, however, felt a bit forced to me. I think I needed more scenes with the bat and cat duo for their relationship to naturally develop, but at the same time I guess it’s easy to fall in love with the one person who lives exactly like you do: in the shadows, isolated from the rest of the world.

“Both of these people have felt alone their entire lives,” Kravitz said, also remarking on how she and Pattinson managed to create onscreen chemistry. “[Finding the chemistry] was very easy; me and Rob have been friends for a long time.”

From this roundtable and other interviews I’ve watched online, I fully believe the two are actually in love, because it still boggles my mind that you can be that close on screen and in promotional videos and remain platonic. But hey, maybe that’s just me.

Another way this movie distinguishes itself from previous iterations is the vibe of the Caped Crusader himself. The Batman we watch is a young Batman: an angrier, moodier, edgier Bruce Wayne. He always looks on edge, as if barely containing the rage that might come out if he lets loose. He is thus more reckless than Bale or Batfleck and thus easier to break.

“I loved all of the frailties [young Batman] has,” Pattinson said in the roundtable. “Batman has always been kind of fallible, and this movie really embraces that.”

When I left the theater, there was someone there jotting down comments given by the early-screening audience such as myself. When he asked me what I liked about the movie, I instantly went into the cinematography of it, as I do with every movie. The cinematography of “The Batman” was so impressive that I’d consider it one of the best uses of lighting (and lack of it) in recent mainstream cinema.

To parallel the grittiness and darkness of the characters themselves, the movie is also dark. It is not pale though—quite the opposite. It is vibrant with color, lighting up the screen with the neon reds and blues that make up Gotham at night. In one very impressive scene, the only source of lighting is gunshots, as the frame switches between light and dark as the guns go off. In its many rooftop scenes, the Gotham skyline is complemented by a beautiful yellow sunrise, where the silhouettes of our characters argue with each other in front of a warm, bright background.

At the end of the day, superhero movies are a derivative of the classic action movie and therefore require the impressive spectacle of long action sequences and fight scenes the genre loves to provide. “The Batman” has no problem satisfying this requirement and the cinematography helps take it to the next level.

The action sequences, though over the top due to the nature of superhero films, feel more grounded than those in the Nolan trilogy. We see Batman feel pain, get hurt, hurl through the air. In one scene, our superhero tries to fly, but the movie makes you understand that he is not used to it. He zips through the air, almost uncontrollably, eventually crashing his parachute into a bridge and falling onto the street. His fragility doesn’t take anything away from his swagger, though. He’s still a badass at the end of the day, whether he’s saving hundreds of lives during the flood or flying his Batmobile through a fire to drive into the Penguin’s car.

The sound design and soundtrack also match the ingenuity of the other aspects that make up “The Batman.” Reeves took inspiration from noir movies of the olden days, making us see through Pattinson’s eyes at times. Batman gets near to unconsciousness more than once throughout the movie and when he does, we do too.

“The whole idea was to put you as much as possible in the POV of the characters. The sound is a way to do that,” Reeves said. “If Batman goes out, you go out, in a noir kinda way.”

The soundtrack is grandiose and obsessive, repetitive even, a perfect representation of the drive and passion of Batman himself. The theme of Bruce Wayne, on the other hand, is melancholy, almost sad. Legendary composer Michael Giacchino is to thank for this.

The sound, the cinematography, the characters and the plot all work together to create this masterpiece, but the message behind this movie, as a set-up to a more mature Batman in future installments, is pretty important as well. The mindset of Batman changes as he struggles through the Riddler’s games, realizing that vengeance is not what people want. This is a pretty crucial turning point for the better for someone who literally dubbed himself “Vengeance.”

“Vengeance won’t change the past,” Batman says at the end of the movie. “People need hope.”

As he holds a beacon to find people crushed under the rubble of the flood, we realize he metaphorically becomes a beacon of hope. At the beginning of the movie we see him flex the fact that criminals fear the sight of the bat signal in the air, but at the end he realizes that’s not what the people need. They need a reason to keep going, a sign that things will get better. Batman decides to be that sign. His priorities have changed.

“The Batman” is gritty, dark, vibrant, action-packed, clever, chilling and emotional. When the movie ended, the lady sitting next to me said, “Gotham got problems,” which pretty much sums up the movie if you don’t want to sit through the three-hour runtime. The three hours don’t feel like three hours, though, so check out this masterpiece for yourself when it releases to theaters on Friday, March 4.