Vanderbilt was outscored 14-2 in the final four minutes against Florida on Tuesday en route to a loss in their home finale. 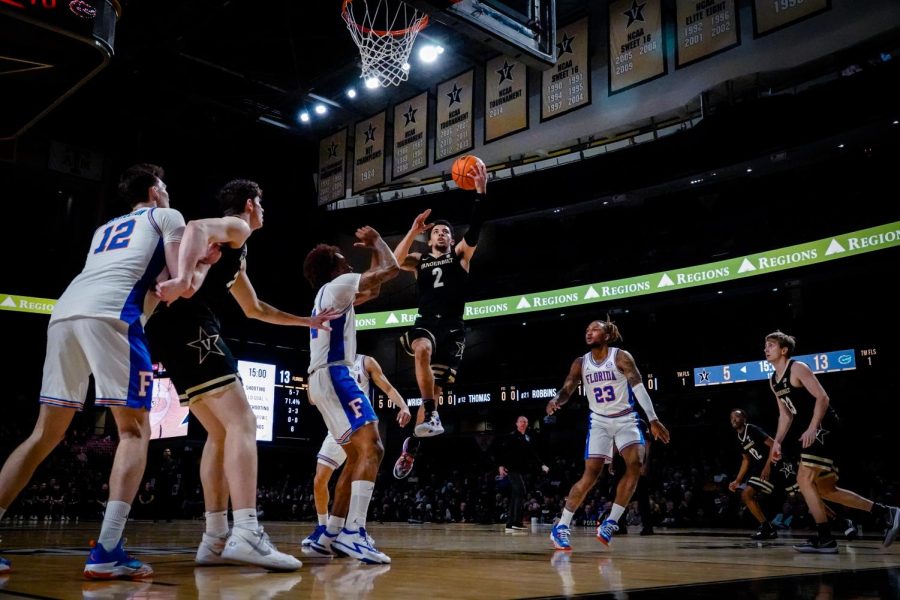 Scotty Pippen Jr. goes up for a layup in Vanderbilt's home finale against Florida on March 1, 2022. (Hustler Multimedia/ Nikita Rohila)

Despite leading by as much as eight in the second half and being up five with 44 seconds remaining, the Commodores were unable to claim the win. The Gators forced a costly turnover off an inbounds pass with under 20 seconds to go before Fleming Jr. hit the dagger 3 as part of a 9-0 run in the last 30 seconds.

“We just didn’t stay together defensively. We didn’t follow some of the game plan and the techniques we worked on for this game,” Trey Thomas said after the game. “We had some unforced turnovers that got them easy transition buckets.”

Even after the 3, however, the score sat at 80-78 with six seconds remaining. On a night in which he poured in 29 points and dished out five assists, Scotty Pippen Jr. had a chance to tie the game with a one-and-one at the free throw line on the ensuing possession. But it wasn’t to be, as the junior missed the front end and allowed Florida’s Colin Castleton to finish the game out with a pair of free throws. Vanderbilt scored just two points in the last 3:39 of game action.

“We can’t have those mistakes at such critical junctures in the game,” Stackhouse said. “Every way we could possibly lose the game—I just feel like we are living in a nightmare right now because that game felt like it should have been our game.”

The Commodores hit a remarkable 15-of-29 (52%) from beyond the arc—their most 3s in a single game this season—and got a season-high 17 points from Trey Thomas, but it still wasn’t enough. Florida got double-digit performances from four different players to help them close out the win.

A pair of difficult stepback 3s from Pippen Jr. and dimes to Liam Robbins and Thomas had Memorial Gymnasium rocking as the Commodores took a 61-54 lead at the third-to-last media timeout.

Florida clawed their way back from the seven-point deficit with a 4-of-4 stretch that featured multiple Commodore turnovers and it was neck and neck from there until the Gators exploded for a 14-2 run to close the game in the final 3:39.

The loss marked the Commodores’ ninth straight to the Gators and will likely force them to beat Ole Miss in their season finale and win at least two games in the SEC Tournament for a possible NIT berth. It also marked Vanderbilt’s fifth loss by five or fewer points this season.

“We have to do it for 40 minutes. Not 38 or 39. This is a tough one. I feel for my group right now. They deserved this. They work hard enough to win a game like this,” Stackhouse said. “This one hurts, no doubt.”

They will finish out their regular season this Saturday in Oxford against Ole Miss before beginning the SEC Tournament next week in Tampa.