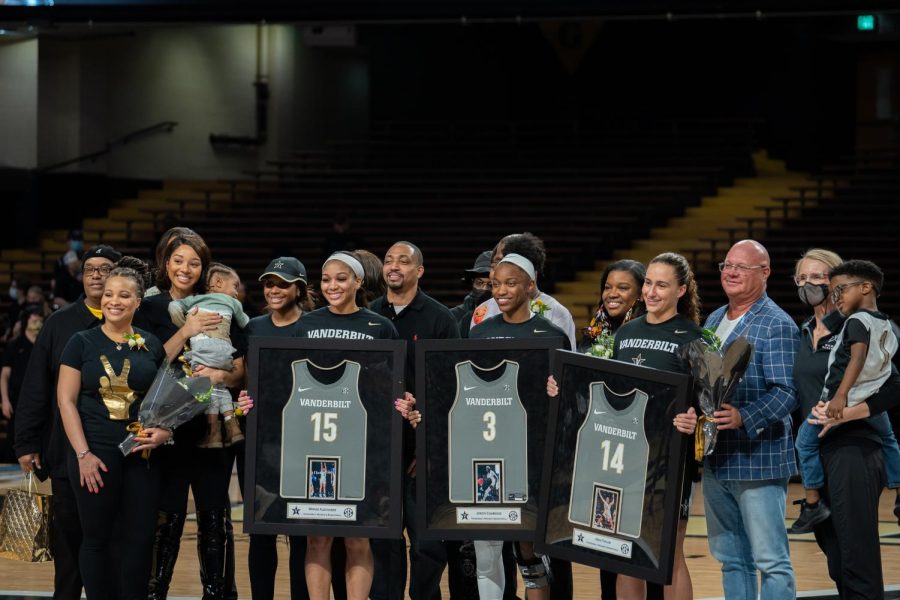 “We’re building this program brick by brick,” head coach Shea Ralph said. “Every step of the way this year, they [the seniors] have bought in. They have given us everything they have—their heart and soul—and I’m so happy that today, on Senior Night, we could get this win.”

In an early Vanderbilt possession, 90 seconds after tipoff, senior guard Cambridge capitalized on a Gator turnover and delivered the game’s first basket. Florida responded quickly, and went on a 6-0 run early in the first quarter. With 4:25 remaining in the first quarter, senior forward Alexander ended Vanderbilt’s three-plus-minute scoring drought by converting on a 3-point basket.

Vanderbilt would conclude the first quarter with a seven-point cushion over Florida, thanks to capitalizing off of Florida’s errors. The Commodore defense helped set the tone on Thursday night, forcing the Gators to 10 first quarter turnovers.

Ralph’s defense wreaked havoc for Florida for the entirety of the first half, forcing 16 first half turnovers. The first eight minutes of the second quarter began with Vanderbilt and Florida exchanging points. Leading the Gators 27-20 with just over two minutes remaining in the first half, junior Kaylon Smith converted on a 2-point basket and sprung the Commodore lead to nine points. In the blink of an eye, Florida went on a 7-2 run to end the half and trailed by just four points. Florida’s run featured baskets from Zippy Broughton, Nina Rickards and Taliyah Wyche. With one half remaining, the Commodores led Florida 31-27.

Vanderbilt’s lead quickly subsided, and within the first 70 seconds of the second half, the Commodore were tied with Florida at 31 apiece. The Commodores exchanged hard-fought baskets with the Gators and led 48-46 after the third quarter. The fourth quarter began with a 6-0 Vanderbilt run and the fans at Memorial Gymnasium were elated by the inspirational play from the Commodores.

With just over one minute remaining in the game, Vanderbilt needed a play to secure the upset victory. Leading Florida 59-56, Vanderbilt turned to Cambridge—in fitting fashion—and she capitalized on two free-throw opportunities with 1:20 remaining in the fourth quarter. The Commodores would pull off the upset and defeat Florida 63-59. Freshman Sacha Washington led Vanderbilt with 16 points.

“It’s amazing. I know they’ve been wanting to come out here and win,” Washington said. “I’m glad we got the win for them [the seniors].”

The Commodores are losing an irreplaceable duo in Alexander and Cambridge. This season, Cambridge leads the SEC averaging just under four steals per game and has notched 108 steals this season. Cambridge’s counterpart Alexander has also been integral in the teams’ success this season, leading the Commodores with 15.2 points per game. Alexander participated in seven games in the 2019-20 season due to an Achilles injury and her junior season was cut short after five games due to COVID19 protocols. Although Alexander has played nearly two seasons of basketball for Vanderbilt, she has notched 791 points in her tenure.

Vanderbilt will conclude their regular season on Sunday with a matchup against the Alabama Crimson Tide in Tuscaloosa, Alabama, at 7 p.m. CST. Vanderbilt’s last clash with Alabama came down to the wire, but the Tide ultimately edged out the Commodores in overtime.

“It means a lot for us seniors,” Cambridge told the Hustler. “We all stepped up today and played for something that was bigger than ourselves.”