A stingy performance from Vanderbilt's defense was not quite enough for the hosts to claim a victory over Ole Miss, as the Commodores fell in their final Sunday home game of the year. 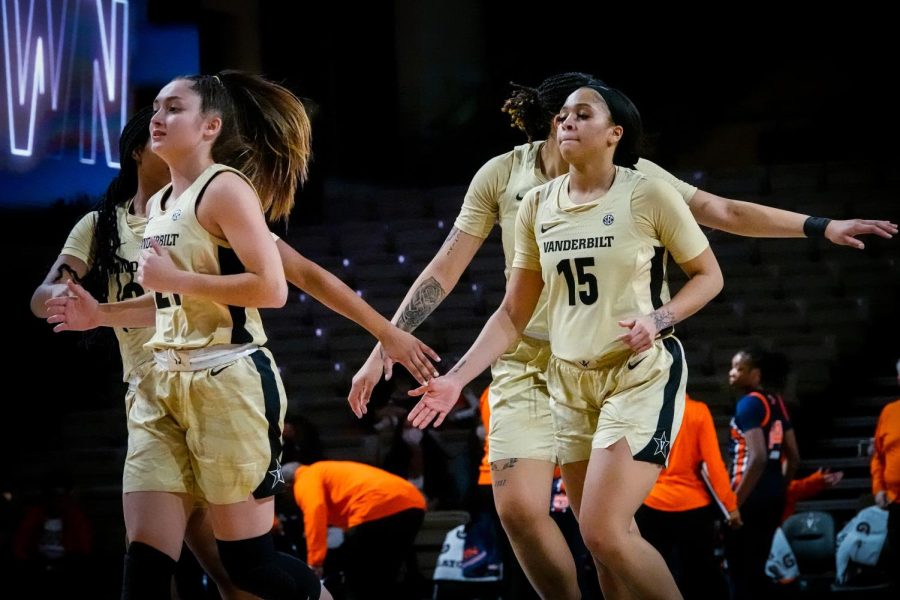 Vanderbilt players celebrate a basket during the Commodores' win over Auburn on Jan. 30, 2022. (Hustler Multimedia/Nikita Rohila)

Sunday’s contest was certainly more even than the final score read, as both teams shot in the mid 40s from the field, registered 20 or more turnovers and got contributions from all over the floor. On the Rebel side, the SEC’s fourth-leading rebounder Shakira Austin led the way with 22 points and 15 rebounds, and the NCAA Tournament hopefuls needed every last point and board to claim a road victory. Austin totaled 11 of her 22 in the fourth quarter, using her overpowering size at 6’5″ to draw fouls and finish deep in the paint. She catalyzed a 16-2 Rebel-run in the final five minutes of action that left Vanderbilt in the dust.

“We had the game. We just had to keep doing what we were doing and we stopped doing that,” Ralph said after the game. “They ran the same play the entire second half and we just stopped rotating and digging with the game on the line. That cannot happen…It was disappointing because for the larger portion of the game, we were the better team, we outworked them.”

The Rebels turned the ball over 27 times and the Commodores racked up 16 points off of those turnovers, but it wasn’t enough for Shea Ralph’s crew on Sunday. Iyana Moore carried the Vanderbilt offense with 19 points on 8-of-17 shooting from the field and for the first 15 minutes of the second half, it appeared as though the hosts had a chance to pull away.

A more than seven-minute scoring drought for Ole Miss from the 4:44 mark of the third quarter all the way to the 6:47 mark of the fourth quarter allowed Vanderbilt to control the pace. The Commodores forced turnover after turnover and the Rebels endured an 0-of-10 shooting stretch during the drought but Vanderbilt was never able to mount a lead larger than four points. Then, down the stretch in the fourth quarter, the visitors hit all four of their final shots, doing just enough to get the win.

As has been the case often this year, Vanderbilt entered the fourth quarter against a quality opponent with a lead. A back and forth first half sent the teams into the locker room tied at 25 before Vanderbilt took a third quarter lead, 39-38, into the fourth. Stagnant offense and a four-minute Commodore scoring drought in the fourth hurt Ralph’s team and they were unable to rely on their best scorer, Brinae Alexander, most of the evening. Alexander struggled against an athletic Ole Miss defense, scoring just six points on a measly 3-of-10 from the field in the defeat.

“Credit to them—they pressed us and played pressure defense that we knew they were going to play,” Ralph said. “It’s all a part of the learning process and as I’ve told you guys before, you can’t skip steps. Hopefully today will make her a better player because I know she’s frustrated as well.”

Vanderbilt will be back in action on Thursday for their final home game of the year against Florida on Senior Night.