No. 3 Vanderbilt loses series-deciding game 7-5 to No. 7 Oklahoma State

The VandyBoys were unable to defeat Oklahoma State and their dominant pitching on Sunday. 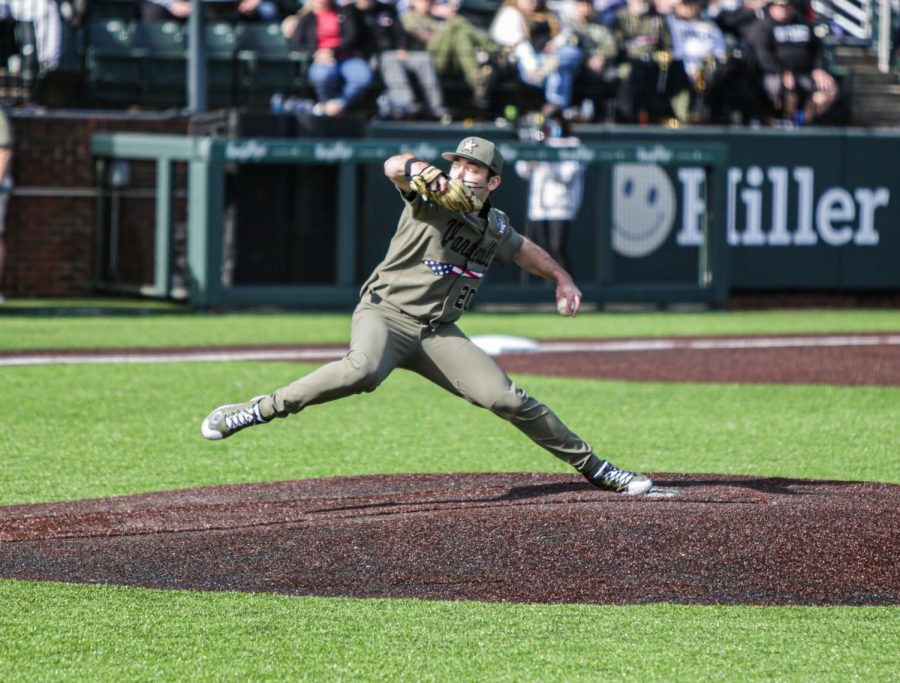 Following a 3-0 win on opening night and a 4-3 loss on Saturday, Vanderbilt’s inaugural series of the 2022 season was on the line on Sunday. The No. 3 VandyBoys fell short to the No. 7 Oklahoma State Cowboys 7-5 in a hard-fought battle.

“We played hard and it’s so early in the season,” head coach Tim Corbin said. “You have to give them a ton of credit, they have a good team.”

The second inning seemed to be much of the same for Holton and the Commodore defense after the Georgia native tallied his fourth consecutive strikeout. Holton’s auspicious debut was quickly expunged, however, as he surrendered a solo home run to Oklahoma State’s Griffin Doersching. Vanderbilt rebounded in their half of the third inning, though, as Javier Vaz jacked a solo homer of his own to right field—the first of his career.

Vanderbilt’s 2-1 lead was jeopardized in the fourth inning with a powerful showing from the Oklahoma State offense. Facing bases loaded and no outs, Holton would walk Doersching with the bases loaded, which brought Hueston Morrill home. The inning would end with Oklahoma State holding a two run lead due to a Lyle Miller-Green single to left center field which brought home two runners for the Cowboys.

“That particular inning, [Holton] just got behind and walked a couple of guys and the inning built up,” Corbin said.

Holton’s day featured seven strikeouts and 39 strikes in his 70 pitches on the mound, but he would surrender four runs. Christian Little replaced the freshman in the fifth inning and threw 24 pitches, allowing no runs. After a flawless showing from Little, Vanderbilt’s Enrique Bradfield Jr. would help in narrowing the Commodore deficit to one when he doubled down the right field line and sent Vaz home.

“[Vaz] is a guy that doesn’t overswing and knows who he is,” Corbin said. “He’s a strong kid and has good hands.”

Little was replaced in the ensuing inning by sophomore pitcher Hunter Owen. Owen, a lefty, allowed one run in three innings pitched. He throw 37 strikes and recorded six strikeouts on 46 pitches.

After allowing one run in the sixth inning, Vanderbilt trailed Oklahoma State 5-3 after the seventh inning stretch. The Commodores were unable to threaten the Cowboy lead in the seventh inning, but Vanderbilt’s Vaz would have an opportunity to change the direction of the day after Owen silenced the Cowboys in the top of the eighth inning.

With Vaz on second base and Bradfield Jr. on first base, sophomore Jack Bulger fired up Hawkins Field in the eight with a line drive single to right field, which brought Vaz home and Bradfield Jr. to third base. A few moments later, Keegan would be walked and pinch hitter Gavin Casas had a bases loaded opportunity with one out and a one-run deficit to mount. Casas answered for Vanderbilt when he sacrificed to right field and brought Bradfield Jr. home and tied the game at five apiece.

Vanderbilt sent junior Thomas Schultz to the mound in the ninth inning after he registered a save a in Friday’s nights win. Oklahoma State put the pressure on the Commodores early in the ninth inning when Jake Thompson’s double to right field sent Morrill home. Later in the inning, Doersching would double to center field and give the Cowboys a two-score lead.

A storybook finish would not be in store for Vanderbilt, as Oklahoma State’s Trevor Martin secured the Cowboy’s 7-5 victory with a one-two-three inning.

“They held us down,” Corbin said. “They played good defense all weekend and they got the big hits when they needed them. They were able to finish games and we weren’t.”

The Commodores return to action this Tuesday at 4:30 p.m. CT. when they will host the North Alabama Lions in a weekday series.