Vanderbilt got 24 points from Scotty Pippen Jr. in a sloppy, yet important, win over Texas A&M on Saturday. 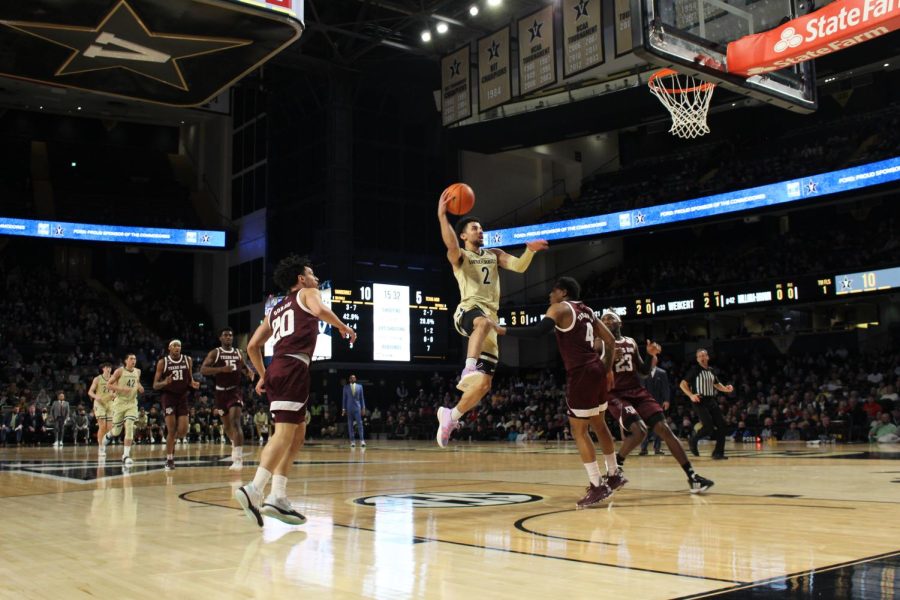 After Vanderbilt lacrosse pulled an upset over No. 12 Notre Dame and the VandyBoys dropped Game 2 of a three-game series against No. 7 Oklahoma State, head coach Jerry Stackhouse’s Vanderbilt Commodores (14-12, 6-8) bested the Texas A&M Aggies (16-11, 5-9), 72-67, to cap a busy Saturday on West End.

In an ever-important game for SEC Tournament seeding, the Commodores overcame 20 of their own turnovers to take the home-court victory that will likely help them gain a first round bye in the conference tournament.

“Great win. That team is tough to play, one of the better defensive teams in our league,” Stackhouse said after the game. “Now we’re still alive and still fighting for some postseason opportunities.”

Scotty Pippen Jr. commanded the flow of the game on both ends, scoring 24 points and grabbing six rebounds, but Liam Robbins was key down the stretch. The big man who has dealt with injuries all season long scored seven points in the final three minutes of action. He finished with a season-high 14 points on 5-of-6 shooting and added eight rebounds and two blocks as well.

“Stackhouse and the staff informed us before the game that they were going to try and muck it up, but if we stay the course, stick to our principles and be us, we were going to come out on top,” Robbins said. “So we just kept doing that, kept grinding it out and we came out on top.”

The Aggies used 18 points at the free-throw line and 29 points off turnovers to threaten the Commodores down the stretch in the second half, but were unable to get the job done. Quenton Jackson gave the visitors 23 points but they also turned the ball over 20 times, leading to the loss.

“We kind of planned all week knowing that—be prepared to be scratched, be prepared to be fouled and just try to play through it and be composed. That’s what we did until the end,” Pippen Jr. said. “This was a big game for us. I think previously in my first two years—close games and games with teams that were a little bit scrappy—we came out on the losing side.”

The Commodores entered the halftime locker room leading 28-27 after a sloppy opening from both sides. The teams combined for 22 turnovers to just 21 made field goals in the first, and after leading by as much as seven midway through the first, Texas A&M’s aggressive, trapping defense gave Vanderbilt fits the rest of the period. Just two Vanderbilt points from the 12:04 mark to the under-eight media timeout allowed the Aggies to briefly take a lead before Vanderbilt took back over to finish the first 20.

Jordan Wright got the Commodores going in the second half, however, notching five of his 15 points, three of his six steals and one of his three assists before the first media timeout. That helped Vanderbilt to a 9-0 run out of the locker room, but Texas A&M fought back thanks to plenty of Vanderbilt turnovers and fouls. A 9-0 run midway through the second put the visitors up as much as four before Vanderbilt finished the contest on an 8-2 run to end the game.

“When we were in that last timeout, I told the guys, ‘This is our season right here’,” Stackhouse said. “Our guys locked in and did everything they needed to do on both sides of the ball. It wasn’t the prettiest game, we made some mistakes, but when it came down to winning time, I thought we executed and did more than enough to win the game.”

Before the game, Vanderbilt honored a pair of seniors as part of their Senior Night festivities. Both Rodney Chatman and Drew Weikert received tribute videos and while Chatman missed the game with a hamstring injury, Weikert got the start and took full advantage. The senior tallied Vanderbilt’s first bucket of the game, a midrange jumper off a pump fake, and ended with five points in 14 minutes.

Despite being seniors, Robbins and Quentin Millora-Brown were not honored pregame, as Robbie Weinstein of 247Sports is reporting that both will “likely” return next season for their fifth seasons of eligibility. Both were impactful on Saturday as well, as they started their second game in a row together and totaled 16 rebounds and three blocks combined.

“Q has been our glue guy, he’s been the heart and soul of us all season long. Liam, what he brings from an offensive standpoint and what he brings from a defensive standpoint as a rim protector, having both of those guys out there [is huge],” Stackhouse said. “We can play pick-and-roll on both sides of the floor right now. I’m still figuring some things out with the lineup [but its gone well thus far].”

Vanderbilt will be back at Memorial Gymnasium on Tuesday when they host No. 25 Alabama at 8 p.m. CST.