No. 3 Vanderbilt takes care of No. 7 Oklahoma State 3-0 in season opener behind 18 strikeouts 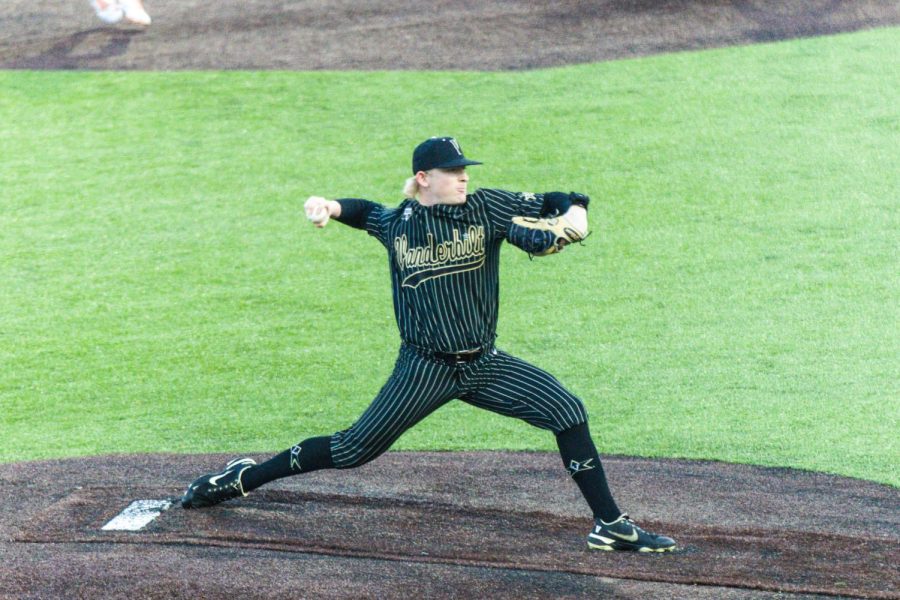 A very busy weekend on Jess Neely Drive began on Friday as the No. 3 VandyBoys began their season with a bang, beating No. 7 Oklahoma State 3-0. In a rematch of last year’s series in Stillwater, it was Vanderbilt who took the season opener behind 18 combined strikeouts from their pitching staff and just enough timely hits to get the job done.

“All the credit goes to the people that were on the mound,” Corbin said after the win. “I thought our guys really had to do well. They really had to command the ball and keep them off base…Just the ability to come in and throw strikes and when they did get on base, our ability to pitch [out of jams].”

On the mound, the VandyBoys rode a trio of Chris McElvain (W, 1-0), Patrick Reilly and Thomas Schultz (S, 1) to the win. McElvain, a junior, started his second career game and went four innings in an impressive effort. He finished his day with 10 strikeouts—the most for a Commodore opening day starter in more than a decade—and didn’t allow a single run on 79 pitches.

M3: Cowboys load the bases with a pair of singles and a walk, but Chris McElvain works out of the jam thanks to a couple of strikeouts. He's up to 7 already today on 61 pitches.

Reilly picked up where McElvain left off in the fifth inning, pitching four clean frames while totaling seven strikeouts himself. The sophomore, who started seven games last season, overpowered the Cowboys with a fastball that topped out around 98 MPH and despite four walks, he set Schultz up for the easy save.

Touches 98 MPH in that inning and needs only 12 pitches to get through a few Cowboys.

For the Cowboys, 2021 All-American Justin Campbell (L, 0-1) took the hill at Hawkins Field and struggled with his control against a well-rounded Commodore lineup. Both he and McElvain began losing their control a bit in the third inning in the sub-40s conditions, but it was the visitors who paid for it.

“[We were] facing a guy that might be the best in the country in Campbell so we knew this was going to be a tough task,” Corbin said. “We knew that the runs were probably going to be really expensive which they were—it wasn’t much of an offensive night.”

After McElvain worked his way out of a bases-loaded jam that featured three full counts in the top of the third, Campbell walked Enrique Bradfield Jr. on four pitches—famous last words for many pitchers last season. Bradfield Jr. was on third base in the matter of a few pitches due to a pair of passed balls before Jack Bulger knocked home Vanderbilt’s first run of the year.

B3: Campbell walks Enrique Bradfield Jr. on four pitches and Bradfield Jr. ends up on third almost immediately (no, not because of steals) due to wild pitches.

Bulger then drives him in with Vanderbilt's first hit of the year!

A single up the middle from the sophomore, one of his two hits in the game, scored Bradfield Jr. easily. Bulger crossed the plate just two batters later when Dominic Keegan launched a double off the right field wall to make it 2-0 Vanderbilt.

McElvain took 61 pitches into a shutdown fourth inning and did exactly that. He racked up three more strikeouts in his final inning of work before Vanderbilt added to its lead thanks to Tate Kolwyck. The senior belted a first-pitch line drive just inside the foul pole in left field to give Vanderbilt a 3-0 advantage and his first of two extra-base hits on the day.

“It’s good to be back playing baseball against a different opponent, and having that competition in front of the best fans in the world,” Kolwyck said. “Playing really good teams right off the bat, challenging ourselves, testing ourselves—we get to learn a lot about ourselves. It’s really good for us.”

The Commodore bats went quiet in the final four innings, but with a combined shutout from McElvain, Reilly and Schultz, they got all they needed to take Game 1 of the series.

The VandyBoys have now bested the Cowboys in three out of the teams’ last four meetings and will look to continue that trend on Saturday with first pitch set for 1 p.m. CST.