Going through the Panhellenic sorority rush process three times has left me emotionally scarred and made me feel utterly alone. 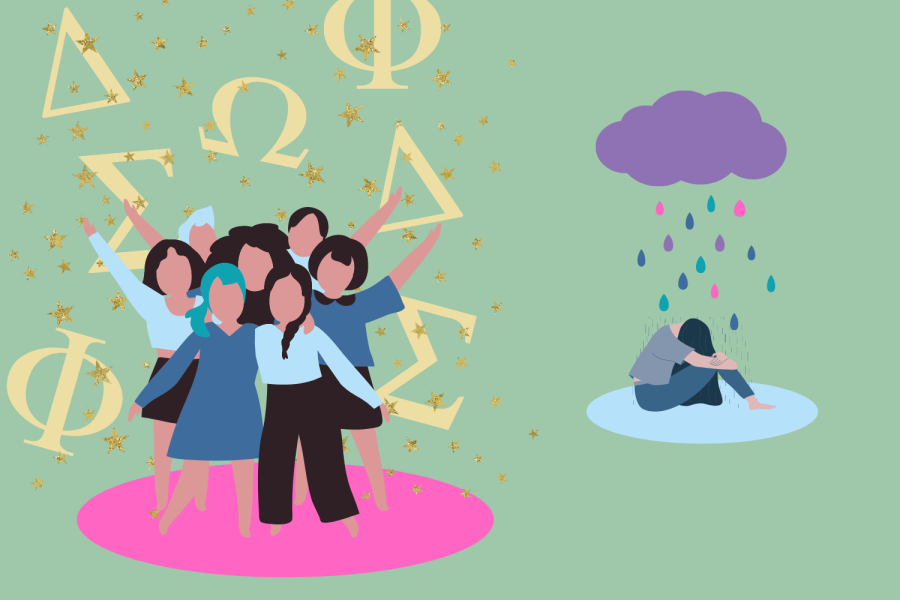 I have wanted to be in a sorority for as long as I can remember. As someone who is described as the STEM incarnation of Elle Woods, the girly-girl role was second nature to me. When I came to Vanderbilt, I could not have been more excited to go through Panhellenic rush. I’d heard that one’s first year of college is supposed to be about finding yourself, but I still wasn’t sure exactly who I was. Panhellenic recruitment seemed like the light at the end of the tunnel where I could grow as a person and find my sisters.

The first time I rushed, I was completely ignorant about the process. I had been so focused on my difficult science classes and adjusting to life at college that I hadn’t been making any connections. I had also never experienced “dirty rushing,” a practice in which current sorority members meet up with prospective pledges on the sly. My friends were going out for rush lunches with their future sorority sisters, while I was just trying to pass my organic chemistry class. People assured me that even though I didn’t go for rush lunches, I would be more than fine because I was social and “sorority-girl pretty.”

This assumption that I would be fine because of my physical appearance is damaging. There is a pretty-privilege representation in Greek Life and a looming pressure to always look your best. Wearing your finest outfits for rush and showing off your wealth through designer brands is the standard in person and on social media. This expectation carries quite a financial burden.

I eagerly anticipated the beginning of rush: the weekend of virtual display and philanthropy rounds. I was so pumped, dancing in the Zoom calls and pacing down the hallway in my silky blouse and sweatpants look. Unfortunately, my excitement was short-lived: after testing positive for COVID-19, I was cut from every sorority I had seen myself in. I was so confused and distraught with the outcome; I had considered myself a likable person and prided myself on fitting in with different groups of friends. I questioned my self-image and personality.

I could have been in a sorority, but why join a sisterhood that did not feel like home? Isn’t the whole point of sororities to find people that you feel comfortable around? The ones that felt like home didn’t want me back and never told me why. It hurts not to know why you didn’t make the cutoff, and it makes you worry every day about what you did wrong.
When you rush, you are essentially being judged for your likeability and how well you would fit into a group of friends. If you aren’t chosen, you never get to know why. I couldn’t help but think that if I was better, prettier, more likable, I would have been chosen.
During the fall of my sophomore year, I tried again to find a group I felt I belonged in. Each fall, the Continuous Open Bidding (COB) process starts as a less formal recruitment process, where conversations are less official and chapters can more quickly give you a bid. The promise of a less dramatic, more welcoming rush process seemed almost too good to be true. I felt that having friends already part of Greek Life would give me a leg up. After visiting the houses, I knew people’s names; I felt like I was in an excellent position to get a bid.

But once again, I failed to make the cutoff. Not every house participated in the COB process, and I was left without a bid from any of those participating.

The denomination of sister made her worthy of their friendship.

I was left asking myself, “why wasn’t I also worthy of their friendship?” After not receiving a bid, I learned about the importance of dirty rushing and the way in which a potential new member is voted on by a sorority here at Vanderbilt. In some sororities, every member votes to determine whether a prospective new member (PNM) should move to the next round, and some sororities require each person you talk to to give you a score based on the conversation you had. If you’re friends with the people you talked to, you will get higher scores. I was being judged based on who I was friends with, not who I was as a person. The politics behind recruitment seemed appalling to me. One conversation had the ability to control my fate in this whole process.

The process disillusioned me, and I told all of my friends I would never rush again. However, over Thanksgiving break, I decided to register for recruitment proactively in case I changed my mind later. The summer before sophomore year, I moved from my home in New Jersey to Miami. Feeling alone, I decided to get out of my comfort zone and meet new people. I felt comfortable with the new me and gained the confidence that hadn’t quite developed my first year. I decided to follow through with formal recruitment for a second time. I felt that I had missed countless events during my freshman year: mixers, date parties, formals and friendships.

My family encouraged me not to go through this process again because they couldn’t bear to see me unwanted, rejected and in pain yet another time. But despite their wishes, I added “PNM 65” to my Zoom name and was ready to rush for the third time, convinced things would be different.

Saturday morning was the start of the display round. I knew the drill; I had already been through the process twice. I prepared with one of my friends and was warned not to talk about the Three B’s: boys, booze and bills. I was cautioned to police my language, to talk about things the other girls would want to hear, to hide parts of my identity. I can vehemently say that these rush conversations were anything but expected. My first conversation discussed all Three B’s. I didn’t know what my position was and I was unsure if I was being taken seriously. Some chapters focused on my wealth and connections, while others asked dry question after dry question.

Picture this: a girl asks you your major, your town, your favorite Nashville restaurant, your weekend activities and why you are rushing all in the span of a few minutes and then has no follow-up responses. Another girl is on her phone the whole time and makes you repeat a question to her three times because she’s not paying attention. These conversations made me feel like I was not worth these girls’ time.

The morning before Preference Round, I was dropped from all but two sororities, and I did not see myself fitting into either one of them. Every sorority has a mold that you are supposed to fit and I just did not fit. Girls are encouraged to “maximize their options,” which involves being open to a bid from any house. There are amazing girls in every sorority, but for me, this meant being left with options I couldn’t see myself being at home in. Therefore, I dropped before I even made it to Bid Day. Any confidence that I still had left crumbled. How could this have happened for the third time? The process had made me doubt myself as a friend, a daughter, a sister and a woman. Was I not cool enough? Not smart enough? Not pretty enough?

The defeat of the process made me so angry knowing that my opportunity to be friends with any of these girls afterward slipped through my fingers⁠—again. I had connected with quite a few girls and made plans to hang out after recruitment. I haven’t received a message from any one of them thus far. Was I not worthy of friendship without the title of a sister? Beyond friendships, my romantic relationships suffered. Not being in Greek life excluded me from inviting boys to “date parties” and boys did not want to take me to theirs because I couldn’t reciprocate and didn’t hold the “sorority girl” label.

On paper, I fit the stereotypes: I’m blonde, tan and social. The recruitment process drained me and left me questioning my identity and self-worth. I cannot begin to imagine how this process would feel for those who aren’t as privileged.
I’ve come to realize that issues within the Panhellenic system are deep-rooted and that small changes will not be enough to erase stigmas and implicit biases every chapter has.
On my very first day of recruitment, I realized that every house on campus had its own idea of exactly how their sisters should be. More than a year later, it is clear to me now that only a few girls have the luxury to show their true selves. Being yourself is only acceptable when you fit the mold set by others. I am already hurt being known as the token friend who isn’t in Greek Life, but I cannot even fathom the added level of pain and discomfort being referred to as the token “diverse” bid in a sorority would place on someone. Given the lack of diversity and inclusion in Greek Life, is no wonder the Abolish Greek Life (AGL) movement is so prominent on Vanderbilt’s campus.

On Bid Day, I stayed in a totally different building the whole day to avoid seeing the excitement and joy around me. Having to watch all the Instagram posts saying things like “finally home” and “got her” reminded me of exactly what I was missing out on.

I want real reform beyond the surface level elimination of the dress code and subsidizing registration fees. The Vanderbilt Panhellenic Council needs to take action to promote a standardized rush experience for all PNMs regardless of connections, wealth and looks. I suggest making the first two days of formal recruitment mirror informal recruitment with less pressure, fun activities and no dress code. Making rush rounds fun can give PNMs a better understanding of the sororities and promote a better experience for current members.
Every girl should feel empowered and safe going through this process. Every girl should feel that they can be their true selves without judgment⁠ and that they will be enough.
Let my abysmal experience serve as a wake-up call that the uncertainty and pain caused by rush are exactly why girls do not rush in the first place and why PNMs drop during the recruitment process. I genuinely hope that my experience brings comfort to those whose confidence was shattered after formal recruitment. I am not a part of the AGL movement, but I am against the Panhellenic rush process as it stands.

Going through this process three times has opened my eyes. It has left me emotionally scarred and made me feel utterly alone. I hope that I can make at least one girl out there feel less alone.

People say that this process should not define you and that you are better than it. While I do not think this process will ultimately define me, I do think that this is one bump in the road and that there will be a silver lining in the end.