The Vanderbilt Commodores started the season with a 18-13 win over the Liberty Flames highlighted by four goals off the bench from Lila Huddles. 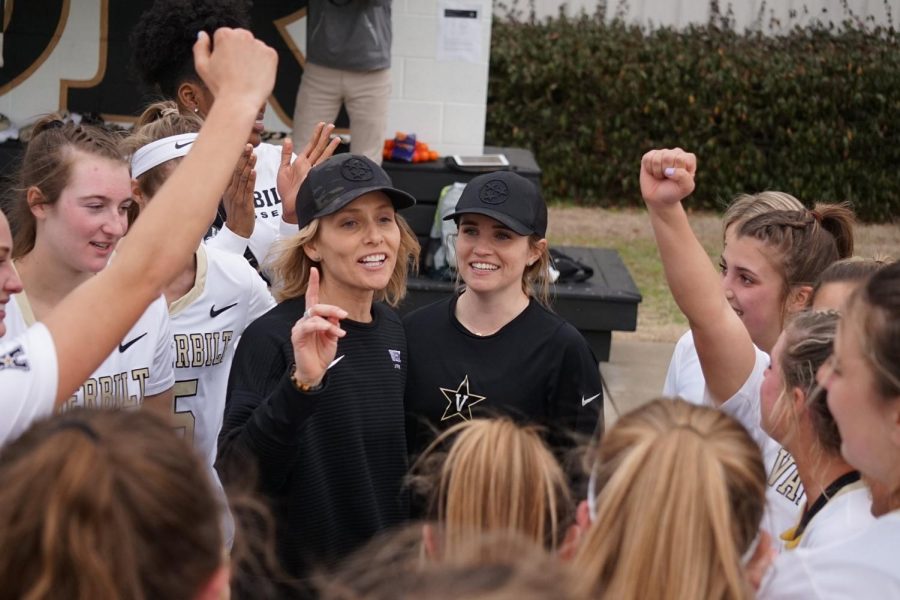 The Vanderbilt lacrosse team kicked off its 2022 campaign on a cold Saturday afternoon with a 18-13 win over the Liberty Flames. The Commodores led throughout the whole game, but it was junior Lila Huddles’ third-quarter four-goal explosion that stole the show.

The Commodores started on the back foot, but it was junior Kayla Rieu who scored the season’s first goal four minutes into the first quarter, followed quickly by senior Karlie Bucci on the breakaway. The Flames called a timeout to try to slow down the attack, but senior Bri Gross notched her first of the season just seconds later. Liberty took the start as a wake-up call, scoring three goals in quick succession to tie the game at 3-3. Sophomore Ella Smith gave the Commodores back the lead, and Bucci caught the Flames’ net empty in transition to make it 5-3. Near the end of the quarter, junior Devin Fitzpatrick took a yellow card, and the Flames converted on the power play. Gross got the last goal of the quarter to put the Commodores up 6-4.

“[Gross] was great on both sides of the field, including getting draw controls from us. I think at different points, she was the answer there too,” head coach Beth Hewitt said after the win..

Hewitt is entering her fourth season at the helm, and the Commodores have now won all four home openers in that span.

Gross completed her hat trick in the second minute of the second quarter off of an assist from fifth-year senior Gabby Fornia. The Flames responded with two straight goals by Mackenzie Lehman, the second on a free-position shot. Sophomore Ellie Hilsabeck got her first, and then senior Callie Sundin made it 9-6 after a well-timed cut to the net and Fornia’s fifth assist. Fornia added her first goal of the spring a minute later and junior midfielder Paige Finneran opened her account with a free-position goal to make it 11-7.

The Commodores controlled most of the first half, but Liberty stayed in the game partly because of fouls: the Flames had 14 free-position attempts in the first half against just two for Vanderbilt, and the Commodores out-fouled the Flames 23-7 in the opening half hour. Junior goalkeeper Paige Gunning made 5 saves on 14 shots on target.

The third quarter was dominated by Lila Huddles, who came off the bench for her first of the season to open the second half. She completed her hat trick within just four minutes to put the Commodores up 14-10. Rieu tallied her second on a free-position shot to give Vanderbilt its largest lead of the game at five. The Flames then responded with two in a row, including their second on a power play. Huddles picked up her fourth of the quarter right at the end of the quarter as the shot-clock expired to make it 16-12.

“She got our game ball today,” Hewitt confirmed of Huddles. “It’s a cold day, she didn’t start, she’s on the sidelines, and to come in and be the person finishing I think it was three or four in a row, to really help us get that separation at the end.”

Sundin scored her second of the game to open the fourth quarter and restore the five-goal lead. The pace of scoring slowed down in the fourth as Vanderbilt kept possession and aimed to control the Liberty attack. Fornia recorded her second goal and eighth point of the game with two minutes on the clock, as the game ended 18-13.

“We were really happy. Sometimes in the first game of the year, there’s some jitters and there’s some mistakes right off the bat, and we still had a couple of them, but we really did a nice job overcoming,” Hewitt said.

Vanderbilt will next be in action on Saturday, Feb. 19 when they will face off against the Notre Dame Fighting Irish.