First-half deficit too big for Vanderbilt to overcome, Commodores lose to No. 19 Tennessee 73-64

The Vanderbilt Commodores were unable to overcome a 12-point halftime deficit, falling to their in-state rivals 73-64 on Saturday in Knoxville. 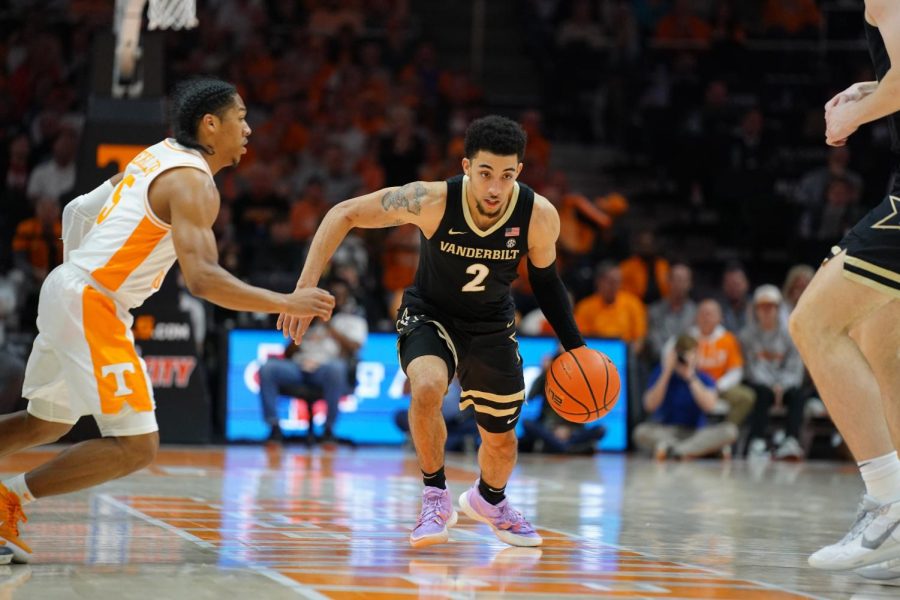 Scotty Pippen Jr. dribbles down the court against No. 19 Tennessee on Feb. 12, 2022. (Vanderbilt Athletics)

In search of their first win over in-state rival Tennessee since 2017, the Vanderbilt Commodores (13-11, 5-7) dug themselves a first-half hole too big to climb out of, falling to the No. 19 Volunteers (18-6, 9-3)  73-64 on Saturday evening. Scotty Pippen Jr. was able to tally 23 points but Vanderbilt was outrebounded and struggled to find consistent offense elsewhere in the defeat.

With his entire roster now available, head coach Jerry Stackhouse played 12 of his 13 scholarship players on Saturday in search of answers for Tennessee’s rebounding but he was unable to find what he needed. The Volunteers shot just 37% from the field on the evening, but they attacked the paint and got 22 points at the free throw line. They outrebounded the Commodores 41-31 and turned 15 offensive rebounds into 17 second-chance points.

“The first half we had a slow start. That really hurt us throughout the whole game,” Pippen Jr. said after the loss. “We just weren’t as physical as we needed to be on defense, or even offensively. Throughout the second half, we were overly physical—little stupid fouls [hurt us].”

The Commodores dug themselves a 12-point hole at halftime after one of their uglier halves of the season, as the Volunteers jumped on the visitors by attacking downhill and totaling 14 points at the charity stripe in the opening half. Five turnovers before the second media timeout were offset by a pair of 3s from Rodney Chatman, otherwise, the Commodores might have found themselves trailing by even more.

“I thought we were a little flat to start the game,” Stackhouse said. “They were playing harder than us. Eventually, we got into the game and made a little run to get back in it, but I just thought we would have had a little bit more urgency to start.”

After Tennessee pushed their lead to 16 points early in the second half, Vanderbilt used an 11-0 run highlighted by a pair of 3s from Myles Stute to cut the deficit down to five with under 15 minutes remaining. That run was followed quickly, however, by a four-plus minute scoring drought without Wright, Stute or Pippen Jr. on the court. That prevented Vanderbilt from closing the gap further, but when the starters did return, they nearly tied up the game.

After Pippen Jr. finished a floater while being fouled, he went to the line to try and make the score 61-60. He wasn’t able to convert the free throw and subsequently committed his fourth foul on the rebound which opened the floodgates for a 8-0 Tennessee run.

“We were a different team in the second half. I thought what we did to them defensively, getting back in the game and giving ourselves a chance to win it [was a positive],” Stackhouse said. “Just when the game got in the balance, we had the opportunity to make some plays and we didn’t make them and they did.”

Stute’s fifth 3 of the game and missed layups from the Volunteers allowed Vanderbilt to hang around, but it was Tennessee who claimed the hard-fought win in the end, finishing the game on a 12-4 spurt.

“I thought we weren’t moving the ball like we should have,” Pippen Jr. said of Tennessee’s 8-0 run that doomed the Commodores. “We had some stupid turnovers like dropping the ball out of bounds and stuff like that. Being ready to shoot and just moving the ball were keys we didn’t have today.”

The Commodores will have it no easier this coming week as they head to Alabama to face No. 1 Auburn on Wednesday. Heading into Saturday, the Commodores boasted two more opportunities to claim ranked-victories. With one already by the wayside, Wednesday’s game will prove ever-more important for Vanderbilt’s dwindling NCAA Tournament hopes.

“It’s always about the next game. There’s nothing we can do about this game now,” Pippen Jr. said. “We have to watch the film, see what we did wrong. Everybody in the locker room is disappointed about this game. We had some momentum going in, so we thought we would do better than we did.”

Vanderbilt and Auburn will tip-off at 8 p.m. CST on Wednesday.