On Saturday in Knoxville, the Vanderbilt Commodores will have a chance to continue building their NCAA Tournament resume against the No. 19 Tennessee Volunteers. 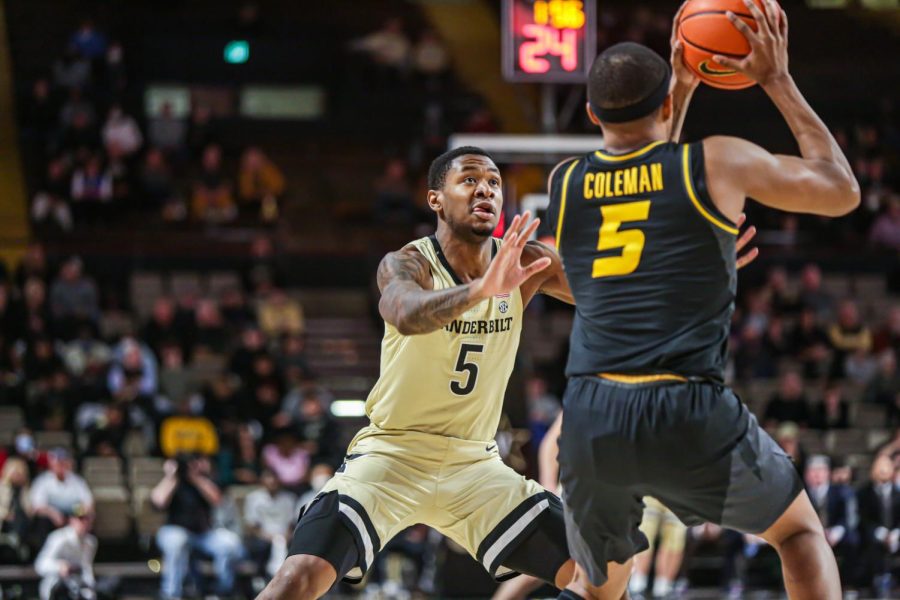 It’s only early February, but heading into a matchup with No. 19 Tennessee (17-6, 8-3), the Vanderbilt Commodores (13-10, 5-6) find themselves amidst the best season of head coach Jerry Stackhouse’s tenure.

With seven games remaining and 13 victories already in their pocket, the Commodores have surpassed their win total from the previous four regular seasons. With five league wins to boot, they have also beaten more SEC foes this season than any of their previous four.

While surpassing the results of the difficult last few seasons is not the ultimate goal for this squad, the Commodores have put themselves in position for an interesting stretch run of the season. Two ranked opponents, four road games and the SEC Tournament will offer plenty of chances for Stackhouse’s team to build its resume in the final three weeks of the season.

Vanderbilt’s hopes to jump on the NCAA Tournament bubble or solidify a spot in the NIT will begin with a trip to Knoxville and a chance at revenge on Saturday.
Current Numbers & Outlook
It’s that time of the year once again: when bracketology becomes the central topic on every college basketball fan’s mind. And for the first time in quite a few years, Vanderbilt should have a chance to play some form of meaningful basketball in March.

The central metric in determining the field of 68 is the NCAA’s NET rankings. The NET is a now four-year-old system that combines a Team Value Index and net efficiency metrics similar to those of KenPom.com to determine national rankings. The Team Value Index is driven by results and rewards beating quality opponents on the road while the net efficiency metrics are derived from a team’s statistical performance on the court, aside from wins and losses. The NET system also breaks down wins and losses into four quadrants based on opponent type. Those quadrants can be explained here.

Currently, Vanderbilt sits at 82nd in the NET rankings. The Commodores are 10th among SEC teams, thanks to a trio of Quadrant 1 victories over Arkansas, LSU and BYU. They are hindered, however, by two Quadrant 3 losses to Temple and South Carolina—both of which were at home—and zero Quadrant 2 wins.

ESPN bracketologist Joe Lunardi currently projects seven SEC teams to make the tournament field, with Florida (projected in) and Mississippi State (projected out) sitting right on the bubble. Based on the NET, the SEC’s next-highest rated team would be the Texas A&M Aggies. After that? The Vanderbilt Commodores.

While Florida (43), Mississippi State (49) and Texas A&M (74) all sit a ways ahead of the Commodores in the NET, Vanderbilt will play each of these three teams in its final seven games and their other four games pose chances at quality wins too.

Barring significant movement in the NET rankings, trips to Tennessee, Auburn and Mississippi State and a home game against Alabama will provide the Commodores four chances at quadrant 1 victories. Then, home games against Florida and Texas A&M and a trip to Ole Miss will pose three quadrant 2 possibilities.

Among the 16 teams that Lunardi labels as on the bubble, only BYU (projected in) and Memphis (projected out) can match Vanderbilt in terms of Quadrant 1 victories. But the Commodores still lack a definitive signature win and any Quadrant 2 wins.

For Vanderbilt, it’s important that BYU remain as a Quadrant 1 victory. Currently the Cougars sit at 46, just four spots away from moving off the Quadrant 1 line. Arkansas and LSU remain safely inside Quadrant 1 but Vanderbilt’s loss to VCU (72) could soon become a Quadrant 3 loss—which would be their third—if the Rams move outside the top 75.

There are certainly paths for the Commodores to make the NCAA Tournament if they can find success against those teams directly ahead of them in the NET. But outside of the Big Dance, the NIT remains a very realistic possibility for Stackhouse and company. Vanderbilt, who won the 1990 NIT, would have to at least finish with a winning record to qualify. In 2018, LSU qualified at-large for the tournament with a 17-14 record. In 2019, Alabama and Arkansas qualified at-large with 18-15 and 17-15 records, respectively.

Barring late-season schedule additions and assuming a loss in the first round of the SEC Tournament for simplicity, the Commodores would need to go 3-5 to finish over .500 at 16-15.
The Biggest Game of the Stackhouse Era
On Saturday, Vanderbilt will have a chance to boost its postseason resume and win a third straight SEC game for the first time since the 2016-17 season. Add that to the enhanced importance of a rivalry game and it doesn’t feel overstated to say this is the biggest game of Stackhouse’s tenure.

But standing in the way of a program-defining victory will be a Tennessee squad coming off of three straight wins during which they have outscored opponents by an average of 11 points. A win will certainly not come easily.

After withstanding a late push from No. 25 LSU last Saturday, the Commodores continued their impressive play against Missouri on Tuesday, besting the Tigers 70-62. Although both sides shot below 43%, Vanderbilt showed it could grind out an ugly game against an inferior opponent.

The impacts of a healthy roster were on full display in the win and for the first time this season, all five of Vanderbilt’s starters scored 10 or more points. The Commodores were able to fend off a five-minute stretch in the second half during which Missouri hit eight straight shots to claim the win.

Following his 24-point explosion against LSU, Rodney Chatman once again tallied double figures with 10 points and flexed his defensive versatility as well, registering a team-high plus-17 in the box score. In the paint, center Liam Robbins made his home debut after sitting out the team’s win over LSU. The big man, who is still on a minutes restriction, notched four blocks in just 11 minutes of play and continues to slowly ramp back up to his former self.

But Tennessee will pose a different set of challenges for a Vanderbilt program that has not beaten their far-east rival since Feb. 22, 2017.

Just under four weeks ago, the Commodores fell at home to the Volunteers, 68-60. With about 1:30 left on the clock, Scotty Pippen Jr. hit a 3 that tied the game at 60, but a stretch of Vanderbilt turnovers and subsequent Volunteer free throws closed the door on the Commodores’ hopes of an upset.

“It’s a big game,” Stackhouse said. “We really kicked ourselves after that game. Looking back, I felt like we had some opportunities. So I think our guys are a little upset. They’re ready to try to prove a point now that we’re kind of whole.”

Vanderbilt has in fact gotten more whole since the teams last met on Jan. 18. Chatman has averaged over 25 minutes per game since returning from his hamstring injury on Jan. 29 and Robbins will offer another big body to bang with Uros Plavsic and John Fulkerson.

This time around, Tennessee will be the team lacking important pieces, as starting center Olivier Nkamhoua will miss the rest of the season. The junior, who had started every game up until Feb. 5, is set to have surgery on his left ankle and gave way to Plavsic in the starting lineup on Wednesday against Mississippi State. While he isn’t the Volunteers’ most skilled player, the big man tallied a season-high 13 points against Vanderbilt in the first meeting between the teams.

“Two games ago, after the Kentucky loss, Coach Stackhouse told us we could right this ship if we won three games in a row,” Wright said. “We got [LSU and Missouri] down and I think just going to Tennessee, it’s the perfect game to go win that third one and get back on the trajectory we need to be on.”

A win on Saturday would go quite a long way towards getting Vanderbilt back on a postseason trajectory. The teams will tip things off at 5 p.m. CST from Knoxville.