Before the longest season in NFL history will come to an end this Sunday, the Hustler staff makes their picks: Rams or Bengals? 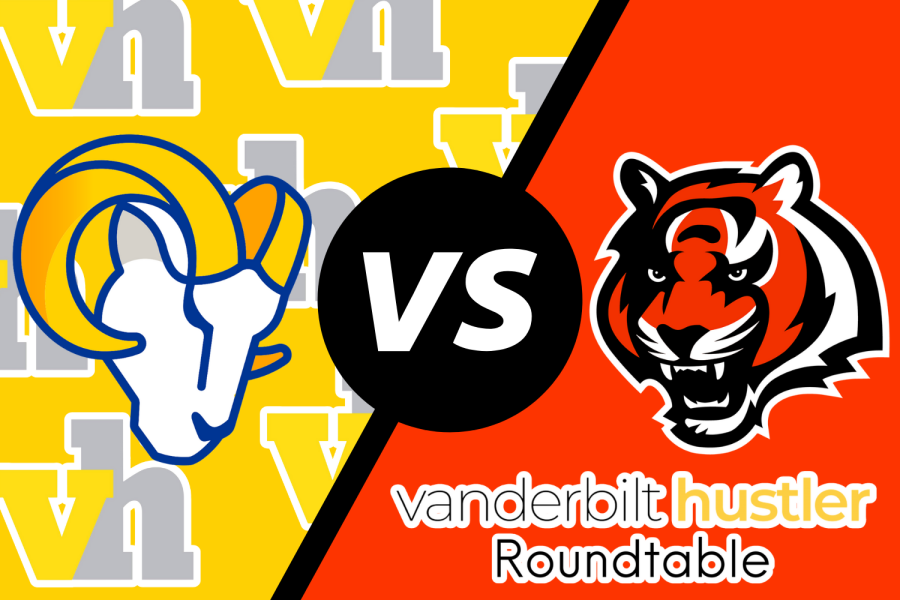 The Los Angeles Rams and Cincinnati Bengals will face off in the 2022 Super Bowl. (Logos courtesy of SportsLogos.net)

The first-ever 17-week NFL season will come to a close on Sunday as the Los Angeles Rams and Cincinnati Bengals duel it out at SoFi Stadium in Los Angeles.

Nail-biting wins over the Tennessee Titans and Kansas City Chiefs in the 2021-22 playoffs have culminated in a chance for the Bengals, led by quarterback Joe Burrow, to win the franchise’s first Lombardi Trophy. On the other side, the Rams battled their way through Tom Brady’s Tampa Bay Buccaneers and their NFC West rival the San Francisco 49ers for their chance to win a Super Bowl in their home stadium.

The Vanderbilt Hustler staff gives its predictions before Sunday kickoff:

I had to Google who was playing before filling out this form, and while I want to say the Bengals will win because their mascot is cooler, I think the Rams will win because of their home-field advantage and because they want to make up for losing to the Patriots in 2019 (bye Tom Brady). I’m also from Nashville and while I don’t watch a lot of NFL games, I did watch the one where the Bengals beat the Titans and I have to wish for them to lose because of that.

As fun as the Joe Burrow ride has been, the Rams will win this game. Burrow will be back before long, but the Rams have the more complete roster and shorter championship window. But regardless of who you are rooting for, let’s just all celebrate one thing on this Super Bowl Sunday: Tom Brady’s reign of terror, luck and cheating has finally come to a close.

After a lifeless first round, these playoffs have been stellar. And somehow, we ended up with two feel-good stories where neither side can be portrayed as the villain. I personally won’t be upset if Joe Shiesty makes Cincinnati fans’ ultimate dream come true and brings home the Lombardi, but I also would love to see Matthew Stafford complete the ultimate prove-it season. I think the Rams go up early on Sunday and hold off a late Bengal comeback. Expect big-time performances from big-time receivers Ja’Marr Chase, Cooper Kupp and Odell Beckham Jr.

Although the Bengals are 4.5-point underdogs against the hometown Rams, I predict that the Bengals will shock the world on Sunday evening. While Joe Burrow was sacked more than any other quarterback this season and the Rams defense is ranked third in the NFL in sacks, the Bengals will use Joe Mixon’s power running to gain a rhythm. The Rams are clear favorites on paper, but so were the Chiefs and Titans. Burrow is a franchise quarterback equipped for big-time moments like these and a guy you never want to bet against. In perfect Burrow fashion, he will march his troops down the field for their rookie kicker, Evan McPherson, to sink the winning kick in the final seconds of the Super Bowl.

There just seems to be something special with the Bengals this year, who are one of just 12 current NFL teams still in search of a Super Bowl victory. Nobody expected this group of underdogs to be here, but Joe Burrow and Ja’Marr Chase have taken off and continue to show that they can compete with anyone in the league.

The Rams have tried to throw their games away in the last two weeks: Matthew Stafford threw a should-have-been interception late against the 49ers after the team coughed up four fumbles against the Buccaneers. Meanwhile, the Bengals held Patrick Mahomes and the Chiefs to three points in the second half and carry a simply undeniable amount of swagger, led by Joe Burrow, Ja’Marr Chase and Evan McPherson. An early pick six by Matthew Stafford will set off a 40-17 thrashing in favor of the Bengals, with McPherson kicking the longest field goal in Super Bowl history along the way.

This Super Bowl matchup is unusually without ties for Patriots fans like me, as Mac Jones, Tom Brady and even Jimmy G fell short in the playoffs. As the first NFL game that Brady will watch as a washed-up retiree, Super Bowl LVI both marks the end of my childhood and the beginning of a new football era, one that Joe Burrow and Matthew Stafford will surely be faces of. However, even with Stafford and their intimidating defensive line, I doubt the Rams will evade Burrow’s magic. He’s been floating on a cloud, and I don’t think he’ll be coming down anytime soon.

Bengals. I honestly wouldn’t mind either team winning, but Joe Burrow has a sense of cool that can’t be taught along with the ‘it’ factor. Despite the Rams maybe having the better team on paper with Stafford, Kupp, OBJ, Ramsey and Donald, Burrow has passed every test this postseason. This one won’t be any different.

My head says to take the Rams, but I’m 100% picking the Bengals. The Rams are at home, have an excellent quarterback in Matthew Stafford and look like the more solid football team. That said, Joe Burrow doesn’t lose elimination games, and I can’t help myself from rooting for him. I also can’t bring myself to like an LA team.

While I find it difficult both to pick—and root against—the Bengals, the biggest underdog story in football led by one of the most likable athletes on the planet right now in Joe Burrow, I think their run ends in Los Angeles’ SoFi Stadium. This Rams team is hungry, especially after their embarrassing performance in Super Bowl LIII, and they have a new quarterback in Matt Stafford who will certainly muster more than three points this time around. The Rams were my Super Bowl pick before the year, so I won’t change course now.

Bengals all day everyday. With the presumed Rookie of the Year and my pick for MVP on the roster, the Bengals have the recipe to win on offense. They’ve also demonstrated the ability to be the aggressors on defense, shutting down the Chiefs and the Titans in recent weeks. They can come from behind or maintain a lead. Who Dey!