The Commodores flashed their full potential, treating Vanderbilt faithful to a strong offensive and defensive performance and beating the Tigers 70-62. 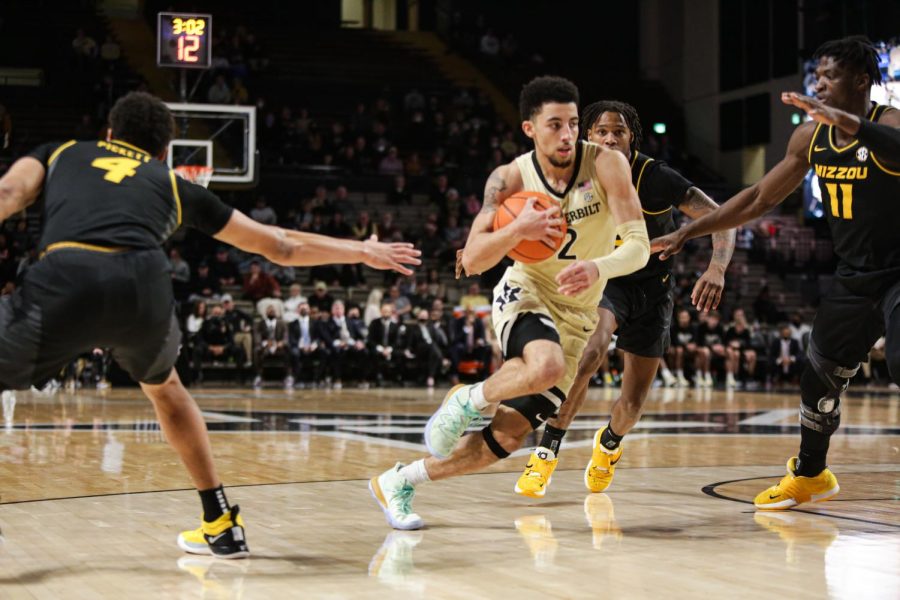 Vanderbilt junior Scotty Pippen Jr. driving through the lane against Missouri in the Commodores' matchup on Feb. 8, 2022. (Hustler Multimedia/Mattigan Kelly)

After a promising win against LSU, students packed Memorial Gymnasium for a midweek bout against a struggling Missouri basketball team that had dropped four of its last five matchups. The Commodores held their home-court advantage, beating the Tigers 70-62.

“I thought that was a gutsy win for our guys,” head coach Jerry Stackhouse said. “Those last seven minutes—it just became a seven-minute game, that’s what we talked about in the huddle. I thought the guys did a good job of closing it out, making free throws and making plays that we needed to make down the stretch.”

With an active atmosphere, Vanderbilt started out the game overexcited and went 2-of-9 from the field. They went down 10-6 before Myles Stute hit a long 3-ball that brought the Commodores to within one.

Both sides played strong defense, contesting nearly every shot and making it hard for either team to find a rhythm. Missouri was finally able to push ahead at 22-18, but a Rodney Chatman 3-pointer rattled home to reignite the Commodore offense. Scotty Pippen Jr. added another nifty lay-in, then got a steal and dish to Chatman to put Vanderbilt up 25-22. Every fan could feel the momentum shifting to the Black and Gold.

Pippen Jr. and Quentin Millora-Brown added two points from the charity stripe and Vanderbilt went into the locker room with a 27-22 lead.

Still, poor shooting from both sides was the story of the first half. Missouri was 0-of-11 from deep and Vanderbilt went 34.6% from the field overall. Additionally, the sides combined for 14 turnovers, eight coming from the Commodores. Considering the stout defense on both ends, it was clear that whichever squad cleaned up their attack best would come away with the victory.

To begin the second period, Stute and Pippen Jr. both contributed important 3s. But, Missouri began to put some offense together, bringing them within shouting distance at 36-30. Yet, their attempts from range continued to fall away from the mark. Their first 3-point make came over six minutes into the second half. That would be one of very few Tiger buckets from beyond the arc, as they would finish the day 5-of-25 from 3.

Despite only playing limited minutes again, Liam Robbins made a huge impact on the game. With two early, thundering blocks that energized the crowd, the Tigers became afraid to even enter the paint when Robbins stood in their way. He forced multiple turnovers and also drew plenty of attention on the attacking end. With his help, the Commodores entered the bonus with over 12 minutes left in play, a huge help to their end-game efforts. This matchup showed why Stackhouse had been so keen on Robbins—he and Chatman truly make Vanderbilt three-dimensional.

“It’s just crazy,” junior Jordan Wright said. “You think a guard is getting by and thinking, ‘Oh, he got a layup,’ but here Liam comes, out of nowhere it seems like, and just grabs it.”

The two teams continued to trade baskets, with Shane Dezonie and Trey Thomas each contributing important 3-point makes. However, a Missouri 6-0 run followed closely by another Tiger 8-0 run left Vanderbilt reeling. A 49-38 lead was suddenly reduced to just one point. Then, with some help from the free-throw line, the Tigers took their first lead of the second half, going up 55-54.

Each side traded another 3-point field goal, then Wright forced a blocking foul and added two all-important scores. On the next few possessions, Pippen Jr., Stute, Millora-Brown and Wright all found their way to the charity stripe, pushing Vanderbilt ahead by six.

The Commodores scored seven straight points on free throws during this key time in the contest. Overall, Vanderbilt went 24-of-35 from the line.

A late Pippen Jr. layup pushed the home side’s lead to eight and essentially sealed the victory for the Commodores. With a few final free throws, the final score read 70-62.

Pippen Jr. ended the day with 19 points and both Millora-Brown and Wright finished with double-doubles. Together, the two totaled 21 points and 22 rebounds.

“After the Kentucky loss, Coach Stackhouse told us, ‘We’ll right this ship if we win three games in a row,’” Wright said. “We got these two down, and going to Tennessee, I think it’s a perfect game to go win that third one and try to get back on the trajectory that we need to be on.”

With the momentum of back-to-back wins in their pocket, Vanderbilt will travel to rivals Tennessee for a chance at a statement win. Tipoff in Knoxville is scheduled for this Saturday at 5 p.m. CST.