In a hard-fought battle, the Vanderbilt Commodores fell victim to an Alabama overtime route on Sunday at Memorial Gymnasium. 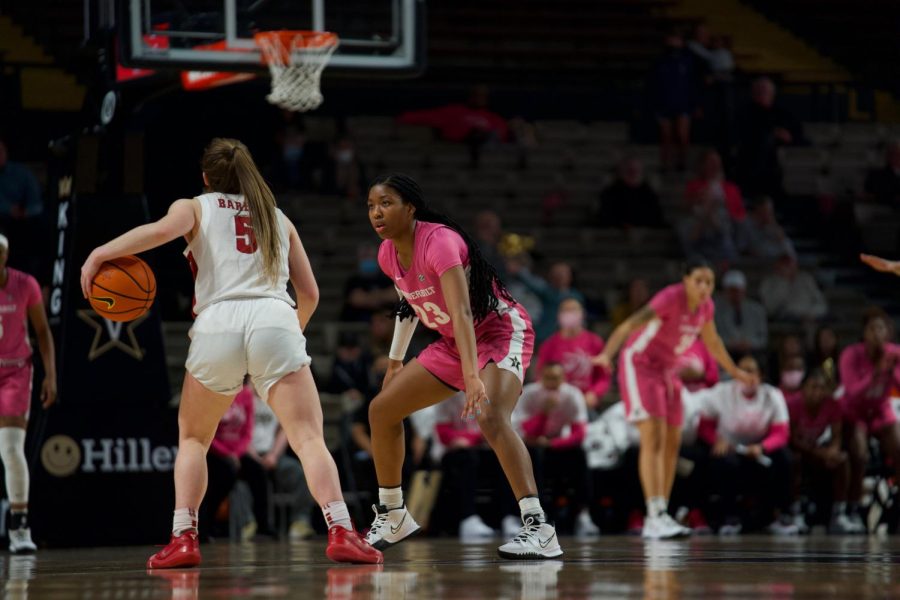 Coming off of a hard-fought loss to the Georgia Bulldogs, Vanderbilt returned to Nashville looking to capture newfound energy, but was defeated by Alabama 77-71. The Commodores were unable to win a third consecutive home game due to Alabama shooting 55.1% from the field and stealing the ball from Vanderbilt 12 times. Vanderbilt displayed their pink and white uniforms for the first time this season to embrace Play4Kay day, but was unable to come out with a win.

“Credit to Alabama, they played a tough game today,” head coach Shea Ralph said. “Giving up 77 points is going to be tough for us. Almost 20 in transition, 20 off of turnovers and we had 10 free throws… We should have and could have won today.”

Vanderbilt began the day looking flat, as the Crimson Tide led 5-0 through the first 2:30 of the game. The Commodores needed a spark to ignite them, and freshman Iyana Moore did just that by knocking in a clutch 3-point basket to bring the game back to a two-point deficit. The first quarter would end with Vanderbilt shooting 50% from the field and on top of Alabama 13-12.

“I was more disappointed in the overall performance in our team and our effort,” Ralph said. “It felt like we were a little bit flat.”

The trends from the first quarter would carry into the next period, as Vanderbilt and Alabama would continue to exchange points. With 4:39 left in the second quarter, Moore brilliantly led fellow freshman Sacha Washington to the basket where she would convert on a routine layup. Vanderbilt has four freshmen—Moore, De’Mauri Flournoy, Kendal Cheesman and Washington—that have combined for 500 points this season, which accounts for 34.6% of the total points scored. This layup lifted the fans at Memorial Gym from their seats, but Alabama’s Megan Abrams would respond by converting on a contested layup at the other end.

“I thought Sacha Washington came in and did some really great things,” Ralph said. “She got better today. She is extremely disappointed with her missed free throws and is down that we lost, but that lets me know that this kid is a winner.”

The Crimson Tide and Commodores would trade punches the rest of the quarter, but neither team was able to run away with any definitive cushion. Vanderbilt entered the locker room tied with Alabama at 31. Star guard Brinae Alexander and Moore led the Commodores with eight first-half points each. Although Vanderbilt shot a respectable 46.7% from the field in the first half, Alabama shot a noteworthy 59.1% from the field in the opening frame.

The aggression on the court would not subside, as Jordyn Cambridge and Alabama’s Davis would collide within the first few minutes of the second half. Both Cambridge and Davis would get up and return to play, but the game remained competitive. The third quarter was nearly even, as the biggest lead for either team was Alabama’s 42-38 advantage with 5:05 remaining. Vanderbilt quickly avenged the narrow deficit and entered the fourth quarter tied, 48-48.

Vanderbilt took control of the fourth quarter right from the get-go as sophomore Bella LaChance stole the basketball and Cambridge transformed that play into a two-point score. Moore would add on to that momentum by sinking in a 3-point bucket with 8:29 remaining to give the Commodores a 53-48 lead. Vanderbilt—leading by two points with just over 1:30 left—looked to be in the driver’s seat. Unfortunately for the Commodores, Alabama’s Jamya Mingo-Young sank a floater to tie the game at 64-64. After scoreless possessions from both teams, the Commodores were unable to end the afternoon despite having regulation’s final possession with 15 seconds left.

Overtime began with Alabama scoring the first five points. With just under three minutes remaining, Washington made two free throws. Abrams made a fast-break layup on the ensuing possession as Alabama looked to run away. The Crimson Tide kept their foot on the gas pedal, leading Vanderbilt 73-68 with 54.8 seconds remaining in the game. Missed free throws were the eventual Achilles’ heel for Vanderbilt as the Commodores ended the night going 11-of-21 from the free-throw line, including a costly missed pair from Kaylon Smith late in overtime.

“They started off strong [in overtime],” Cambridge said. “I think we needed to do a better job at being ourselves.”

Vanderbilt will look to get back in the win column on Thursday when they travel to College Station, Texas, to compete against Texas A&M at 7 p.m. CST. A Vanderbilt win would be the fifth in school history over Texas A&M and the second Commodore victory inside Reed Arena since the 1997-98 season.

“When we play our brand of basketball, we can compete with anyone left on our schedule,” Ralph said.