Behind 24 points from Rodney Chatman and nine assists from Scotty Pippen Jr., the Vanderbilt Commodores held off No. 25 LSU on Saturday. 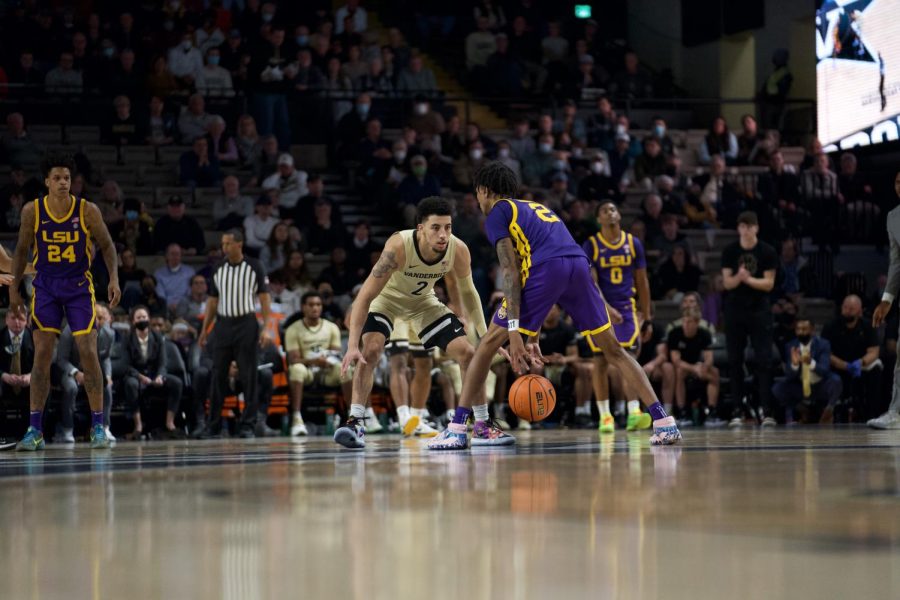 With a performance only befitting of Vanderbilt legend Shan Foster’s jersey retirement night, the Vanderbilt Commodores (12-10, 4-6) upset No. 25 LSU (16-7, 4-6) 75-66 behind a season-high 13 3-pointers at Memorial Gymnasium. Fifth-year senior Rodney Chatman led the way for the Commodores with six of those 3s en route to a season-high 24 points—by far the transfer’s best performance in the Black and Gold.

“Unbelievable win. I’m excited for our guys. They fought,” head coach Jerry Stackhouse said after the game. “[Rodney’s] just a winner…He knows what it feels like to come into a locker room victorious and he’s sharing that with these guys. Whenever we got in those tight moments, he stepped up and made a big shot.”

Arguably the Commodores’ best offensive performance of the year, the win came exactly two years to the day since their last ranked victory, an upset over then-No. 18 LSU, that snapped a 26-game SEC losing streak. The Commodores struggled at times in the second half, but fended off a 16-0 run from LSU down the stretch to seal the deal on their fourth SEC win of the year.

“They cut the lead to nine and I told the guys, ‘This is the game. So if we want to win, we have to win this part of the game’,” Chatman said. “We could have gotten scared, we could have gotten rattled and folded but the resiliency of this team, the camaraderie [helped us get the win].”

After a sluggish first five minutes of action, the Commodores laid into LSU to the tune of seven first-half 3s to build their lead. A 10-0 run midway through the frame thanks to Jordan Wright and Myles Stute catapulted Vanderbilt in front before Chatman even got going.

The Commodores moved the ball exceptionally well, making LSU pay for switching every screen and Chatman found himself open all over the court. He hit four of his six 3s in the game’s first 20 minutes as Vanderbilt registered 12 first-half assists and held LSU to just 44% shooting from the field. Scotty Pippen Jr. was a big reason for Vanderbilt’s early success, but not due to his scoring. The junior who has oft talked about being more of a facilitator than scorer registered a season-high nine assists to just two turnovers in the win despite going 2-of-12 from the field.

LSU outscored the Commodores by seven points before the first media timeout of the second half by speeding Vanderbilt up and generating turnovers. But then, it was Stute’s turn to get hot. The sophomore hit three of his five 3s in the final stanza and helped mitigate attempted runs from the visitors. He finished with 17 points on the night after not even attempting a shot on Wednesday against Kentucky.

“This was a key win for us. Looking back at this season, we let a few games go that I think we could have gotten,” Stute said. “I’m very proud of the guys. The fight, the tenacity we came out with was exactly what we need to do every night in the SEC to win games.”

The win solidified a memorable evening of festivities that featured a halftime presentation to Foster, Vanderbilt’s all-time leading scorer. Athletic director Candice Storey Lee rolled out the red carpet for the Commodore legend whose number was then retired in the rafters of Memorial Gymnasium.

“This doesn’t just represent me, it represents every single person in this gym tonight,” Foster said during the ceremony. “I love every single one of you. Thank you Commodore Nation.”

Deservedly so, Saturday’s game featured one of the better crowds of the year for the Commodores and after the game, Stackhouse credited the raucous environment.

“I thought our crowd was unbelievable,” Stackhouse said of the Vanderbilt faithful. “Those students, they were energized. Our fans in general just brought a lot of energy and it really helped our guys get over the hump tonight.”

After making his Vanderbilt debut on Wednesday against Kentucky, center Liam Robbins was inactive on Saturday due to an ankle injury. The Commodores missed his physicality on the interior against LSU, but they were still able to take care of business and hope to have him back soon, according to Robbie Weinstein. Stackhouse confirmed after the game that the big man rolled his ankle in practice on Friday but that x-rays were negative and they were just being “extra cautious” with the injury.

The Commodores will be back in action on Tuesday at home against Missouri at 8 p.m. CST.