Vanderbilt center Liam Robbins made his Commodore debut on Wednesday, but Vanderbilt was unable to come up with a win at Rupp Arena. 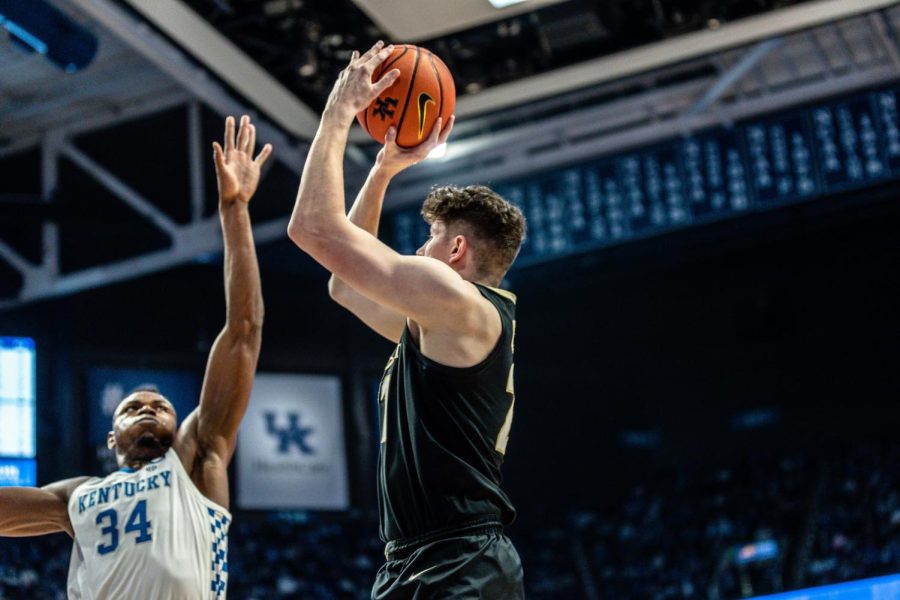 On a night in which National Player of the Year Candidate Oscar Tshiebwe did not score until the 3:13 mark of the first half, the Vanderbilt Commodores (11-10, 3-6) were still unable to hold down the nation’s fifth-ranked team at Rupp Arena, dropping their sixth SEC game 77-70 to Kentucky (18-4, 7-2).

“Throughout their roster, they have guys that you have to be concerned about, but I think they were concerned about our guys as well,” head coach Jerry Stackhouse said after the game. “We came out and competed. Our leaders, they came out and had big games for us. We just needed a couple of more contributions and unfortunately we didn’t get those tonight.”

Vanderbilt held Tshiebwe and star guard Sahvir Wheeler to just 14 total points on 2-of-13 shooting from the field, but Davion Mintz and Keion Brooks Jr. scorched the Commodores, scoring 21 and 20 points respectively on a combined 13-of-26 from the field. Scotty Pippen Jr. poured in 33 points and Jordan Wright added 14, but the Commodores got just seven points from their three other starters combined.

“They’re a top five team in the country. I thought we came out and we were right there with them,” Pippen Jr. said. “We feel a little banged up and all but we competed and fought. I’m so proud of my guys today and a couple more things we need to clean up and I think we’ll be there next time.”

The Commodores got off to a decent start in front of a somewhat light crowd at Rupp Arena as they allowed the Wildcats to hit just five of their first 16 shots from the field. Powered by defense, the Commodores used a 9-0 run midway through the first half to take an 18-15 lead. But things quickly went south for the visitors once Kellan Grady and Mintz began finding their stroke from beyond the arc.

The two upperclassmen hit six of their eight first-half 3-point attempts. As a team, the Wildcats canned nine of their final 12 first-half shots to enter halftime with a 41-31 lead. But for a contested Pippen Jr. 3-pointer as time expired, Kentucky might have been up even more. Pippen Jr. registered 17 of his 33 points in the opening frame, but he did commit five of the Commodores’ 11 costly first-half turnovers.

Vanderbilt used an 11-3 run out of the locker room to jump all over the Wildcats in the second half. Wright catalyzed the run with a 3-pointer and foul line jumper as Kentucky was unable to find good looks at the other end. The Wildcats knocked home just one field goal before the first media timeout.

The Commodores had the Kentucky lead down to one by the first media timeout, but a pair of turnovers and subsequent technical foul on Stackhouse for arguing with the officials pushed the Kentucky advantage back up to ten just minutes later.

“We’ve been on the wrong end of that rivalry for a while, but I think we’re closing the gap,” Stackhouse said of the chippiness in the second half. “You’re going to have that chippiness on both sides. I thought our guys were battling hard and just wanted to make sure that we give ourselves a fair chance to win the game.”

Down the stretch, a heavy dose of fouls on both sides down the stretch turned the game a bit sloppy but Kentucky was able to hit their free throws and find enough quality shots to pull out the victory. The Wildcats tallied 25 points at the line to the Commodores’ 15 and 18 total Commodore turnovers mitigated the fact that they won the second half, 39-36.

Despite the loss, the Commodores got a bit of good news pregame on Wednesday as prized transfer Liam Robbins made his debut. The big man played 13 minutes in his first game since Feb. 20, 2021 and collected two rebounds, one assist, one block, and a steal.

“Liam, obviously, he’s getting his feet under him,” Stackhouse said. “A lot emotions in his first game back and coming back in this type of environment. Give credit to him. He wanted to get in, wanted to get back and felt like he was ready to contribute a few minutes. So we were really excited to have him.”

Next up on Vanderbilt’s schedule will be the LSU Tigers. The Commodores and Tigers will face off at 5 p.m. CST on Saturday at Memorial Gymnasium.