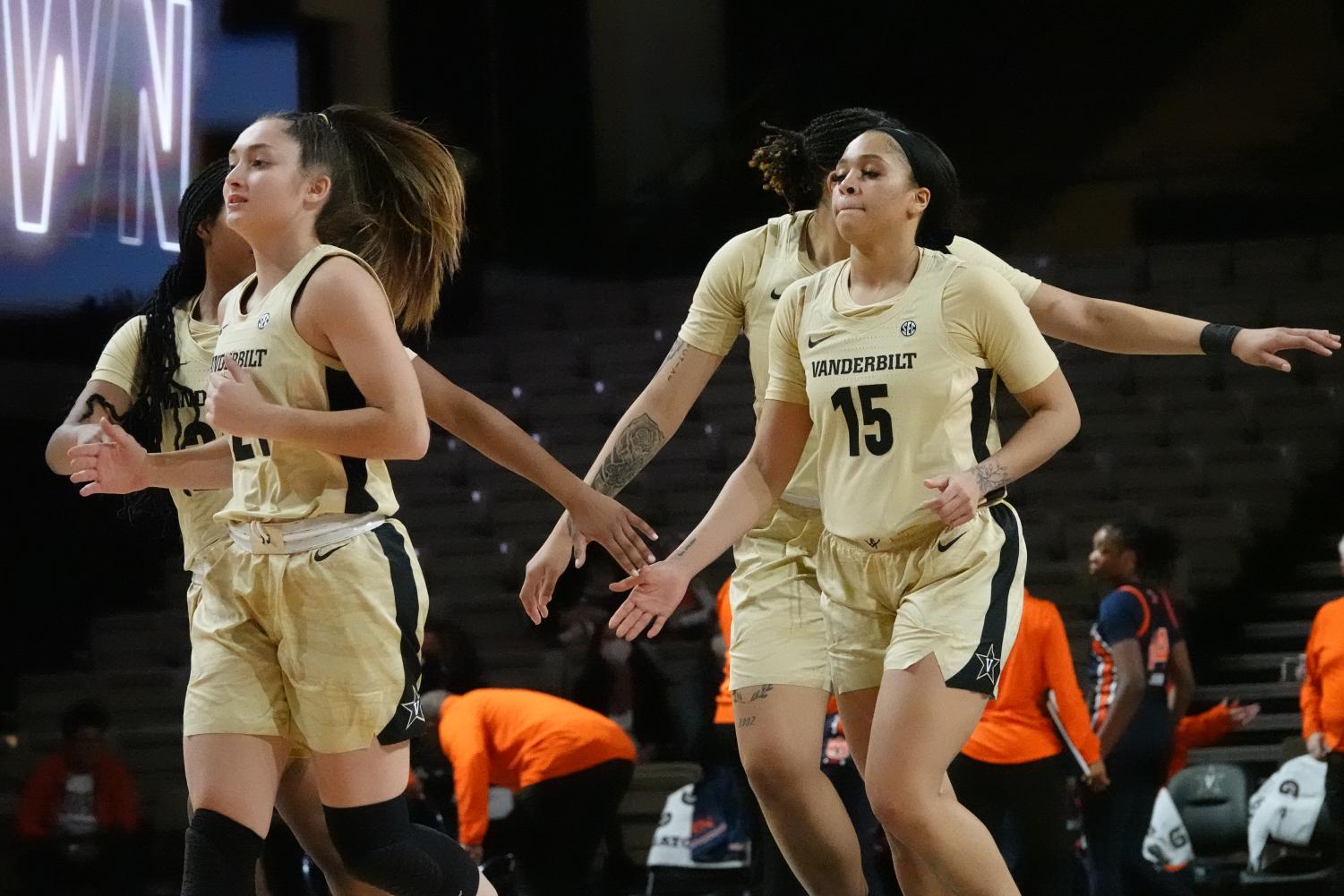 Vanderbilt players celebrate during their win over Auburn on Jan. 30, 2022. (Hustler Multimedia/Nikita Rohila)

Memorial Minutes: Getting Out of the Cellar, Building Winning Streaks

After consecutive seasons at the bottom of the SEC, Shea Ralph has led the Vanderbilt Commodores out of the cellar of the best basketball conference in the nation.

That was Shea Ralph’s message in advance of a pivotal midseason game for Vanderbilt women’s basketball last Thursday night against Kentucky. After five consecutive losses and the bulk of a grueling SEC schedule still on the horizon, Ralph imparted a ‘living in the moment’ philosophy to her team.

Lo and behold, after 40 minutes of gritty basketball on a bitter night in Nashville, her team escaped with a 65-57 win, beating their SEC East rivals for the first time since March 1, 2020. Just three days later, the Lady Commodores lived in the moment once again, capping a memorable weekend on West End by taking down Auburn in Memorial Gymnasium, thus notching their first SEC winning streak since 2017.

Ralph’s first team at Vanderbilt enters February on a high note—which is not something most expected this early in her tenure. After five straight losses featuring ugly basketball, her messaging and the culture that she is building kept this season afloat for a program that, in years past, has folded in the face of early SEC-season adversity. That doesn’t appear to be on the horizon under Ralph.

“There’s a lot that can happen to a team when you went through what we went through the last couple of weeks,” Ralph said after her team’s win over Auburn. “But their resiliency, their belief and their trust in us as a coaching staff and in each other and in the program that we’re building, it’s palpable. You can feel it. You can see it.”

On the backs of their upperclassmen leaders Brinae Alexander and Jordyn Cambridge, the Commodores took home a pair of wins and have now withstood the most difficult part of their conference slate. One thing remains clear: This team still believes they can beat anyone. And with that kind of belief and winnable games upcoming, it is time to acknowledge that Vanderbilt women’s basketball will be returning to the NCAA Tournament sooner rather than later.

After getting banged up against LSU in a road loss just two weeks ago, Vanderbilt’s fearless leader Cambridge returned to the court in exciting fashion this weekend. She assumed her usual role of defensive stopper and a facilitator to the tune of eight steals and six assists in Vanderbilt’s victory over Kentucky and followed that performance up with 19 points and 10 rebounds against Auburn.

The senior guard was recently named a National Defensive Player of the Year candidate and provided the spark and maturity that Vanderbilt lacked in a trio of losses to LSU, Missouri and South Carolina. Without their lockdown guard, Vanderbilt forced just 43 turnovers and tallied 30 assists. With her back in the lineup, they forced a whopping 25 turnovers and registered 13 assists against Kentucky.

“It’s no secret she’s the heart and soul of what we do,” Ralph said after that win. “On defense and offense she’s steady. She’s confident. She’s a great communicator. She’s extremely coachable. She’s a great teammate. All the things—she’s a coach’s dream, but we’re a different team with her on the floor. And you saw that tonight.”

Against Auburn, Cambridge was once again everywhere. She converted multiple and-1layups, tied a career-high with 19 points and did it on 8-of-12 shooting from the field. She was an integral part of holding Auburn to just 44% shooting and proved once again how much better Vanderbilt is with its point guard on the floor.

However, even though her name is Jordyn, these performances only make her Pippen for this Commodore team. She had a Jordan-esque counterpart against the Wildcats and Tigers in Alexander, who erupted for a career-high 26 points against Kentucky and 24 points against Auburn.

The senior, who leads the Commodores in scoring, hit 8 of 15 3-point attempts in the two wins, but continues to show her offensive versatility. She made all 10 of her free-throw attempts against the Tigers and found consistency in the mid-range as well. The Murfreesboro native has blossomed into a true No. 1 option for Ralph’s team with no signs of slowing down.

So often the key to winning college basketball games is getting your best two players going at the same time. Vanderbilt had that and then some in these two wins. The two worked off of each other wonderfully and combined for 78 points on 27-of-50 from the field—a winning combination against almost any opponent. 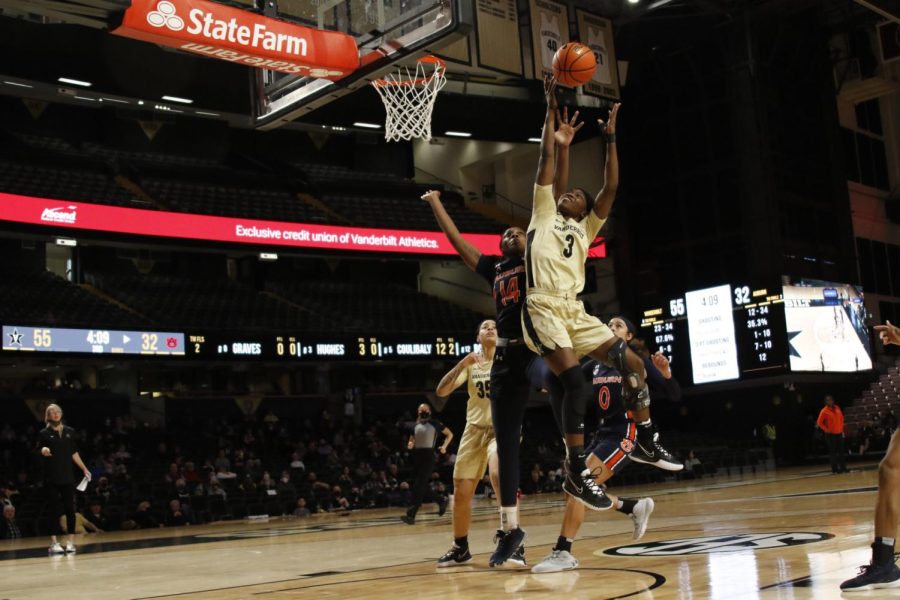 “Jordyn Cambridge is one of the toughest players I have ever coached…Having her on the court makes us a different team. When Brinae plays like she did tonight, we are a different team,” Ralph said. “We are growing leaps and bounds and I’m just really happy for this team that it showed up in the win column today.”

I am a Philadelphia 76ers fan—so I know how to ‘Trust the Process’ better than most. But apparently, so too do Ralph’s Commodores.

Entering this season, Ralph took over a brand new roster that had not committed to her, yet her control and respect in the Commodore locker room appears to be growing with each passing day.

“The people who have been here for the longest, we are just trusting the process. We are finally starting to see a lot of change and it makes us feel really good,” Cambridge said after her team’s win over Auburn. “We have a long way to go so we just have to keep playing the way we are playing and try to get more wins.”

What rings true from watching this Vanderbilt team is that they play hard for their head coach. There is no doubt that they are undersized and less talented than many SEC teams they go up against. But their attention to detail, physicality, strength with the ball and approach to each game is night and day from where it was in years past.

That’s a testament to Ralph and this coaching staff. Whatever the former UConn assistant is saying, it’s no doubt working.

Case in point, freshman Iyana Moore was coming off of her worst stretch of play all season going into Sunday’s game against Auburn. She had knocked down just 14 of 49 shots in her previous four games. But Ralph didn’t remove her from the starting lineup and instead, empowered her to get out of her slump.

The talented freshman finally found the groove that helped her set a Commodore 3-pointers made record earlier in the season and hit 7 of 11 shots, including 5 of 6 from downtown, in Vanderbilt’s win over Auburn.

A second case in point is Sacha Washington. Entering Vanderbilt’s game against South Carolina, the physical forward had played over 20 minutes just four times all season, mostly because of her inability to defend without fouling. In her next three games, including two Commodore wins, she averaged 23 minutes, hit 10 of 22 shots from the field and grabbed 21 rebounds, giving Vanderbilt a much-needed interior presence.

Ralph is getting more with less right now and that’s what has led to SEC victories. She’s outcoaching her counterparts and instilling a belief that has resonated with people she has known for less than one year. That’s the mark of a good leader and why Vanderbilt will be back in the NCAA Tournament sooner than most expect.

Twenty-two games into the 2021-22 campaign, Vanderbilt holds a 12-10 record and is 3-5 in the toughest conference in the country. Right now, the Commodores check in at No. 76 in the women’s basketball NET rankings. Believe it or not, that puts the Commodores just outside of the top 68 teams, yet 13th in the SEC, only ahead of Auburn. So yeah, the SEC is pretty tough.

But with games against LSU (No. 17), South Carolina (No. 1) and Tennessee (No. 8) already out of the way, Vanderbilt’s road ahead appears a bit easier. The Commodores still have games against Kentucky (No. 58) and Florida (No. 63) and two against Alabama (No. 69) upcoming on their schedule. Those are the three SEC teams directly ahead of them in the NET rankings.

So is an NCAA Tournament berth realistic this year? Right now, the Commodores are certainly on the outside looking in. ESPN women’s basketball bracketologist Charlie Creme currently slots eight SEC teams in her field of 68. This is the first year the women’s tournament will feature 68 teams—something that could help the Commodores’ case.

Regardless, a number of wins over the aforementioned lower-tiered SEC opponents and an upset or two would be needed for Ralph and company to qualify for their first NCAA Tournament since 2014.

The Vanderbilt Hustler welcomes and encourages readers to engage with content and express opinions through the comment sections on our website and social media platforms. The Hustler reserves the right to remove comments that contain vulgarity, hate speech, personal attacks or that appear to be spam, commercial promotion or impersonation. The comment sections are moderated by our Editor-in-Chief, Rachael Perrotta, and our Social Media Director, Chloe Postlewaite. You can reach them at [email protected] and [email protected]
All The Vanderbilt Hustler picks Reader picks Sort: Newest
Subscribe
Login
1 Comment
Newest
Oldest Most Voted
Inline Feedbacks
View all comments
P
PhilipVU94

Glad to see the positive change Shea Ralph is bringing to Vanderbilt WBB. Nice summary piece. Who are the “Lady Commodores”? I recall a team with that nickname 30 years ago.