After going down 7-0 to the Tigers, Vanderbilt went on a 35-6 run that sealed the Commodores’ third SEC victory of the season. 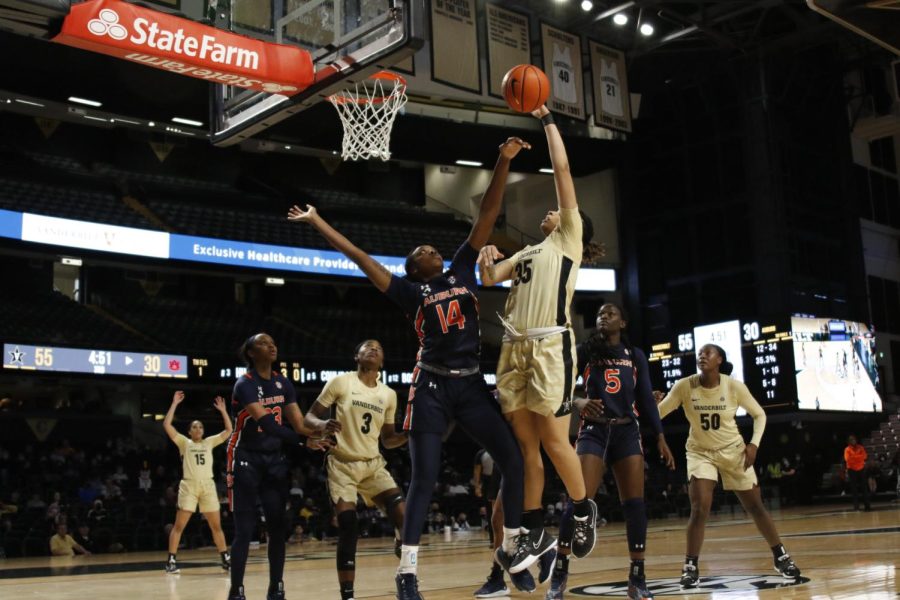 The weekend of bliss on West End continued for Vanderbilt athletics on Sunday as Shea Ralph’s women’s basketball team dominated the Auburn Tigers, 81-66. Commodore fans were also treated to a rare, stress-free win on Saturday, Jan. 29, as the men’s team handily defeated the Georgia Bulldogs, 85-77.

“[The win] means everything, honestly,” senior Jordyn Cambridge said. “We, the people who’ve been here for the longest, we’re just trusting the process. And we’re finally starting to see a lot of change, and it makes us feel really good. But, we have a long way to go. So, we’ve got to keep playing how we’re playing and then try to get some more wins.”

Auburn had just come off their most impressive result of the season: a 71-61 win over No. 4 Tennessee. This was the Tigers’ first SEC victory of the year and gave them momentum coming into the matchup with the Commodores.

Vanderbilt, on the other hand, had momentum of their own after halting a five-game losing slide with a 65-57 win over Kentucky. Both sides saw an opportunity to establish a win streak and mark a turning point in their season. However, it was Vanderbilt who emphatically capitalized on this chance.

The game started with a 7-0 Tiger run. In that time, the Commodores had four turnovers, three missed shots and one shot blocked. It seemed like a bad forecast for Vanderbilt and a continuation of impressive play for Auburn. Then, Cambridge got an offensive rebound and scored an and-1 layup. This changed the tide of the whole afternoon.

On the next Tiger possession, Brinae Alexander got a steal. Off of this, Iyana Moore hit a 3-pointer. Another steal. A  3-point play from Moore. Another turnover. More Commodore points.

In the blink of an eye, Auburn’s advantage had disappeared and Vanderbilt led 11-7. They never looked back.

The Commodores shooting was near-perfect during the first half. They shot 73% from the field, including 5-of-6 from deep. Their ball movement was textbook, they rebounded well and their defense was exemplary as per usual. They ended the half forcing 13 Auburn turnovers and a field goal percentage of just 39%. Most impressively, they outrebounded the Tigers 20-5, no small feat for an undersized lineup.

During a 46-14 Commodore run, Cambridge, Moore and Alexander exploded. They combined for 38 points on 15-of-17 shooting, adding five steals and nine assists to their own offensive production. The triad set a tone for the entire Commodore team on both sides of the floor.

“Really proud of my team, and I think we’re growing leaps and bounds every day, and that doesn’t always show up in the stat sheet or in the wins and loss column,” Ralph said. “I’m just really happy for this team that has showed up in the win column today.”

The second half provided much of the same for the home crowd. The Commodores maintained their lead and closed out the Tigers. Unfortunately, they did let their focus slide at times and lost the second-half turnover margin badly. The 11-2 difference was uncharacteristic of a strong defensive squad, but Auburn was still off-target when shooting—47% from the field in the second period, so it didn’t cause many problems for the home team.

Vanderbilt would glide to a 81-66 victory, finishing the day shooting 58% from the field and outrebounding Auburn 38-23.

Superb individual performances highlighted the match for the Commodores. Cambridge, who finished with a double-double, and Alexander combined for 43 points, 13 rebounds and five assists. Additionally, the freshman Moore shined, scoring 22 points on 5-of-6 from deep, dishing out seven assists and even adding three steals to her tally.

This game goes to show what Ralph and her team are capable of with good shooting. The offense was a well-oiled machine that seemed to find every open look and make their chances with high efficiency. On defense, Auburn got very few easy baskets and suffered from constant pressure and full-court press. This is not to say there are not areas for Vanderbilt to improve, as the Commodores still amassed an astonishing 27 turnovers, a few of which allowed Auburn to make a desperate late-game push which ultimately came up short. However, it was certainly a staple victory for Ralph and this Commodore side—they put up their third-most points of the season and did it in style.

Vanderbilt will look to continue their hot run and extend their win streak to three against the Georgia Bulldogs in Athens on Feb. 3 at 6 p.m. CST.