Vanderbilt completed a two-game sweep of the Georgia Bulldogs on Saturday, beating their SEC East foes 85-77 at Memorial Gymnasium. 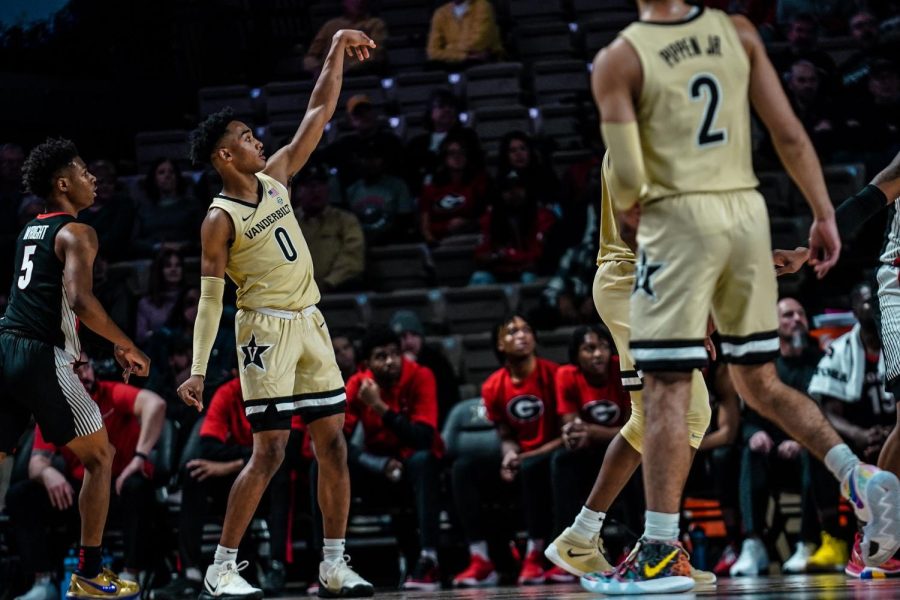 Vanderbilt guard Tyrin Lawrence hit a 3-pointer as time expired in the first half of Vanderbilt's win over Georgia on Jan 29, 2022. (Vanderbilt Athletics)

On a brisk Saturday evening in Nashville, the Vanderbilt Commodores (11-9, 3-5) were able to snap a season-long three-game losing streak by beating the Georgia Bulldogs (6-15, 1-7) 85-77 at Memorial Gymnasium. The win marked Vanderbilt’s second over Georgia in the matter of just a few weeks and the first time they have swept an SEC opponent since 2017, when they did so against Texas A&M.

Energy was restored inside Memorial Gymnasium as students were back in attendance after the Commodores Care period, and Vanderbilt celebrated a number of great athletes, administrators and coaches for Hall of Fame Induction weekend at halftime. Jerry Stackhouse and the Commodores did their part to add to the festivities, leading wire-to-wire against a struggling Georgia team.

“Good spirited win. I thought we came out and did some really good things early,” Stackhouse said. “Lot of excitement in the gym. It was great to have our students back in the gym. They brought great energy.”

The usual cast of characters led the way for Vanderbilt, with Scotty Pippen Jr. tallying 23 points and nine assists and Jordan Wright adding 15 as well. Vanderbilt also got a much-needed boost from guard Rodney Chatman. Chatman made his return on Saturday following a five-game absence due to a hamstring injury, and the transfer guard was effective at both ends. He scored 12 points and added four rebounds in the win.

“My body is feeling good. My knee and my hamstring are feeling good. My movements felt instinctive out there. I didn’t have a knee brace on,” Chatman said after the game. “I’m feeling the best I’ve felt all year. I just want to keep it rolling and stay healthy.”

The Commodores took terrific care of the basketball all evening, turning the ball over just eight times, and compiled their best 3-point shooting effort of the season, hitting 12 of 23 (52%) from downtown.

Vanderbilt got off to a fast start, picking apart the Georgia defense with patience. The Commodores used long possessions and a couple of Bulldog defensive breakdowns to take an early 11-6 lead at the first media timeout. By the time halftime rolled around, the Commodores had extended their lead to 10 points behind superb 63% first half shooting and a Tyrin Lawrence buzzer-beating 3-pointer at the halftime horn.

The Commodores stepped on the gas in the second half, though, finding plenty of open looks from beyond the arc and taking terrific care of the ball. Wright got going early in the frame, canning a deep 3 from the top of the key and getting to the line for easy points as well. Jamaine Mann got in on Vanderbilt’s hot shooting, knocking down his first 3-pointer of the season midway through the game’s final stanza to push the Commodore lead to 15.

A 10-0 Bulldog run cut Vanderbilt’s lead to as little as eight with eight minutes to go, but Stackhouse put his starters back in quickly thereafter to stop the bleeding and solidify the win. Pippen Jr. brought the Commodores home by scoring 11 points in the final six minutes of play and mitigating a late surge from the Bulldogs.

“I thought we had more energy today. We had Rodney back so that was a little boost offensively and defensively,” Pippen Jr. said. “We had a chip on our shoulder. We have not been playing as well as we want to be playing. We knew we had to stop the bleeding tonight and get this win.”

Vanderbilt will be back in action on Feb. 2 when they travel to Lexington for a battle with the No. 12 Kentucky Wildcats at 6 p.m. CST.