The Commodores fell to No. 6 Tennessee in their season’s home finale in Nashville. 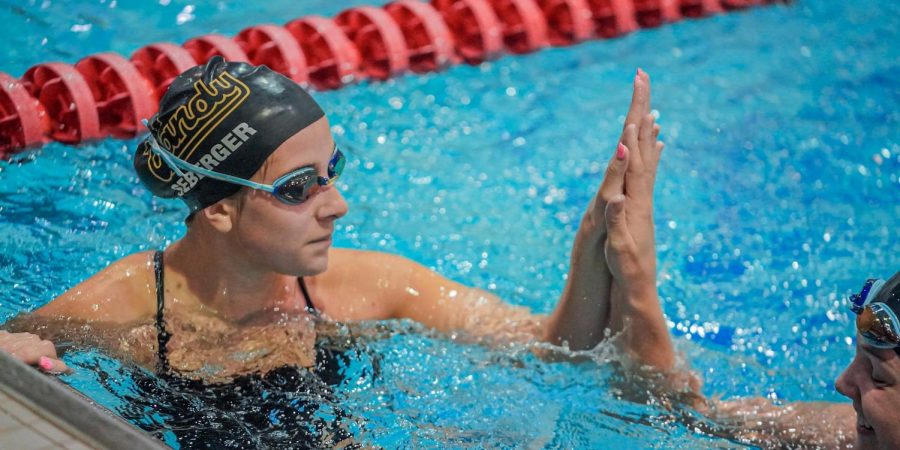 Following a nearly two month break in action, Vanderbilt swimming returned to Centennial Sportsplex last Thursday to face off against the No. 6 Tennessee Volunteers. The Commodores struggled to gain much momentum against the Volunteers and fell 204-58 in their season’s home finale. The meet commenced with a ceremony to honor Vanderbilt’s seniors, who swam in their final meet in Nashville against their in-state rival.

“The seniors have been really great leaders for us both in and out of the pool,” head coach Jeremy Organ told The Hustler. “I’m just really proud of that whole group, and they’ve been through a lot. Lots of curveballs were thrown our way but they’ve been a strong foundation for us to get through all that.”

The Commodores started off the meet in strong fashion, claiming second place in the 200-yard medley relay with a time of 1 minutes, 43.44 seconds from a team featuring Abby Burke, Faith Knelson, Tonner Debeer and Eleanor Beers. Debeer, a senior, performed well in the relay, winning her leg of the race with a time of 24.48 seconds. Organ praised Debeer’s contributions to Vanderbilt swimming:

“She’s really been a strong leader on the team all four years. She’s been a major factor in the team’s growth as a whole,” he said.

After a competitive start, the Volunteers took control of the meet with dominant performances in the 200-yard freestyle and 100-yard backstroke, claiming the top three finish spots in each race. Vanderbilt’s next top-three finish in the meet came in the 200-yard butterfly, where freshman Kalia Utley came in third place with a time of 2:07.03. This race was yet another impressive finish in butterfly events for Utley, who swept these events at Vanderbilt’s last meet at the Miami Invitational.

Following Utley’s strong race, sophomore Gabriela Pierobon Mays earned bronze in the 50-yard freestyle with a time of 24.48. Beers followed this up with another third-place finish for the Commodores with a time of 52.13 in the 100-yard freestyle. Though Vanderbilt was able to place in many of these events, the Commodores’ inability to finish higher in these races allowed the Volunteers to jump out to an insurmountable lead early in the competition.

In one of Vanderbilt’s best finishes of the day, Debeer took second place in the 100-yard butterfly with a time of 56.73. Coming in just behind her in a dramatic finish was Tennessee’s Annie Rimmer, who finished with a time of 56.93. The two were neck-and-neck for the entire race and were headed for a very close finish. Fortunately for the Commodores, it was Debeer who earned second place and four points for the home squad.

Thursday’s defeat was Vanderbilt’s first since their season opener against Arkansas. At 4-2 with just one meet left in the season before SEC Championships, Organ talked briefly about his expectations for the Commodores’ postseason.

“We’re trying to just have them have their best performances of this season,” Organ said. “Everyone’s had different opportunities to train over the last two years, so we have to look at this season and do our best to perform at the SEC meet.”

Vanderbilt’s final meet of the regular season will be against Arkansas-Little Rock on Saturday at 11:00 a.m. CST.