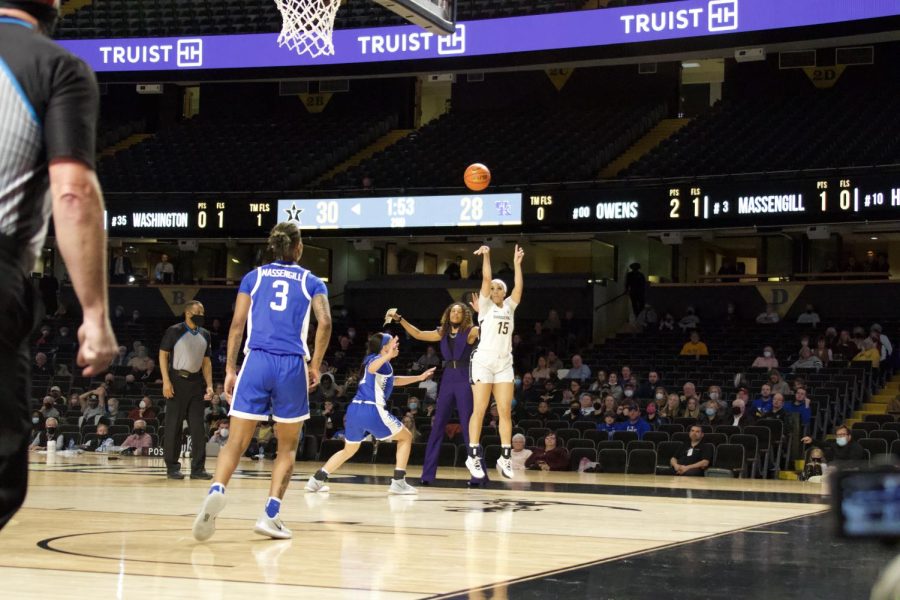 Vanderbilt forward Brinae Alexander rises up for a 3-pointer during Vanderbilt's game against Kentucky on Jan. 27, 2022. (Hustler Multimedia/Barrie Barto)

Keyed by a strong defensive showing and an outstanding effort from Brinae Alexander, Vanderbilt overcame a rough shooting performance to claim a 65-57 victory over Kentucky on Thursday night at Memorial Gymnasium.

The Commodores forced a staggering 25 Wildcat turnovers on the night, preventing Kentucky from getting much going offensively. In her return from a two-game absence, senior guard Jordyn Cambridge led Vanderbilt with eight steals. Meanwhile, Alexander totaled a new career-high with 26 points on the night and shot 6-of-11 from behind the arc.

“It’s no secret: she’s the heart and soul of what we do on defense and offense,” head coach Shea Ralph said of Cambridge. “We’re a different team with her on the floor, and you saw that tonight.”

The Commodore defense got off to a fast start, forcing three turnovers on Kentucky’s first three possessions. Realizing that they were struggling against the Vanderbilt zone, the Wildcats countered by pushing the pace off of defensive rebounds and Vanderbilt buckets. Kentucky scored seven fast break points in the opening quarter.

As a result of Kentucky’s abundant turnovers, Vanderbilt took eight more shots in the first frame. But they were not able to take advantage of the attempt differential, shooting 38.9% from the field. All in all, the Commodores led 17-15 at the end of the first.

Kentucky’s struggles continued in the second quarter, where they coughed up an additional eight turnovers, ending with a remarkable 16 for the half. Vanderbilt capitalized with 15 first-half points off turnovers.

Star guard Rhyne Howard was Kentucky’s lone bright spot, accounting for nearly all of the Wildcat offense with 11 of Kentucky’s 13 second-quarter points. Howard had a stretch of eight points in 3:09 and shot 3-of-4 from behind the arc. This was the beginning of another special night for Howard, as she led Kentucky with 25 points after putting up 29 Tuesday against Auburn.

Not to be outdone, Alexander matched Howard’s 3-of-4 shooting from long distance in the second quarter. All of Alexander’s nine points in the second came in a span of 48 seconds, when she knocked down a 3 on three consecutive Commodore possessions late in the quarter.

“The best players that I’ve ever worked with, played with, coached, are the ones that make everybody else on the floor better,” Ralph said. “They can win the game, impact the game without touching the ball. Brinae has the ability to do that.”

It's raining for Brinae Alexander in Memorial! Three straight possessions, three straight 3s for No. 15 and she's up to 16 points at the half.

Vanderbilt forced an incredible 16 Wildcat turnovers in the 1st half and has a nice lead at the break.

Alexander’s electric spurt was part of a strong Vanderbilt finish to the first half. The Commodores went on an 8-0 run in the final 2:13 to head into the locker room up 35-28, a lead the Commodores wouldn’t relinquish.

The duel between the two star players continued into the third quarter. Alexander continued to excel from deep, hitting two 3s in the third. Meanwhile, Howard did much of her work from the charity stripe, shooting 4-of-4 from the line as part of her nine third-quarter points.

Kentucky was better able to limit their turnovers, registering four in the quarter. This allowed them to hang with Vanderbilt, and a back-and-forth third quarter ended with the Commodores up 52-46.

Sacha Washington provided Vanderbilt with a spark in the second half, tallying all nine of her points and 10 of her 12 rebounds in the second. Her inspiring effort included a span of 1:39 late in the third quarter where she drew a charge, converted on two layups and extended a possession with two offensive rebounds before adding a free throw.

Vanderbilt appeared to be pulling away early in the fourth quarter, extending their lead to 10 points with just over eight minutes remaining. However, Kentucky fought back to draw within three, 58-55, with 5:16 left behind a 7-0 run and five consecutive points from guard Emma King.

From there, increased defensive intensity and physicality was the key for Vanderbilt pulling out the victory. Vanderbilt forced five Kentucky turnovers in the fourth quarter, including two errant inbounds passes late in the game.

After King’s back-to-back buckets, the Commodores didn’t allow the Wildcats to score again until a Howard layup with 15 seconds remaining—after the game had already been salted away by a Jordyn Cambridge bucket and two Iyana Moore free throws.

Alexander tacked on two free throws in the closing seconds to set her career-high and put a final stamp on her showdown with Howard.

The Commodores will look to build upon their performance at home Sunday against Auburn at 2 p.m. CST.