The Vanderbilt Commodores have never made three consecutive trips to Omaha for the College World Series, but they will have a chance to change that this season. 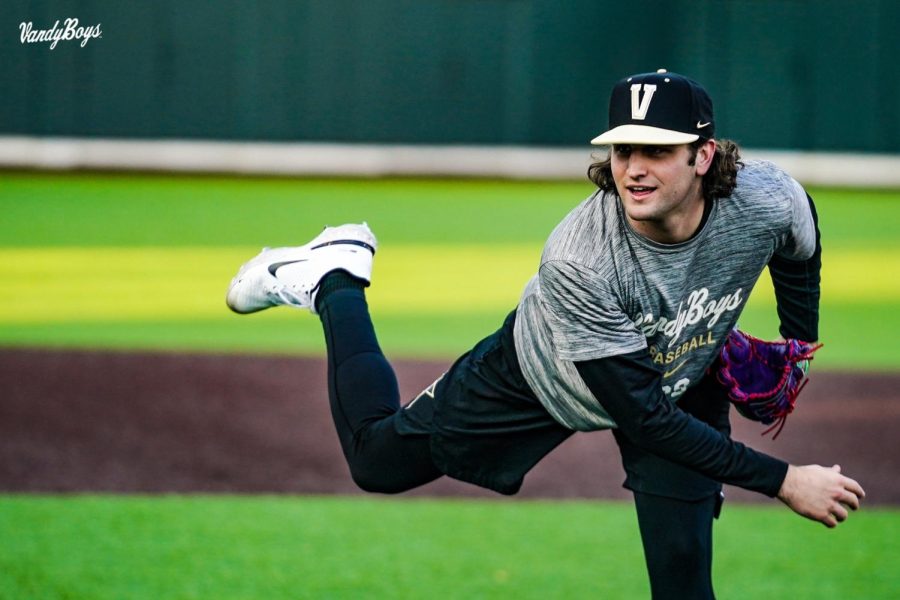 Vanderbilt baseball trains in advance of the 2022 season that begins in February. (Vanderbilt Athletics)

When Vanderbilt’s run to the 2021 College World Series championship ended in a heartbreaking loss to SEC rival Mississippi State, the sun did not only set on another season under Tim Corbin. But it also set on the college careers of VandyBoys legends Kumar Rocker and Jack Leiter.

Now, after a fall slate that included games against North Carolina and Richmond and the annual Black and Gold series, just four weeks remain until life after Rocker and Leiter truly begins.

Without their former aces, Corbin and the VandyBoys enter this year with newfound youth that certainly raises questions about pitching rotations and positional assignments. Nonetheless, with a wealth of talent reminiscent of even Corbin’s most successful teams, the Commodores will begin 2022 with nothing short of typical VandyBoys expectations.

“Everyone’s excited,” Corbin told reporters on Wednesday. “I think the fall is a little bit different just because it feels a little bit slower then in retrospect that it goes by so fast. I think right now, there’s not much ramp up time so it’s on us quickly. I think the excitement of just getting into a schedule and playing again is building.”

2022 poses a unique opportunity to even Vanderbilt’s accomplished baseball program: to make a third consecutive College World Series appearance. After qualifying for the greatest show on dirt in 2019 and 2021, for the second time in program history the VandyBoys will have a chance at a third consecutive trip to Omaha. And their skipper isn’t going anywhere, either.

Corbin’s 20th year on West End begins after he signed yet another contract to remain the face of Commodore baseball. He will look to manage the VandyBoys to his fifth College World Series come June.

“It’s certainly a compliment from Vanderbilt to us and creates consistency within the program which I liked for the kids,” Corbin said of his contract extension. “Being compensated for being a teacher and a coach is a really extraordinary gift… I feel very young. But I know what my numbers say on my birth certificate and I think for Vanderbilt to look at that and say this guy still has the energy and the wherewithal to be around for a while is certainly a compliment.”

His 2022 squad begins the season ranked No. 3 in the nation according to D1Baseball’s preseason top 25. After finishing as the NCAA’s runner-up last season with a 49-18 campaign, the VandBoys check in one spot ahead of the defending champion, Mississippi State.

These two powerhouses are just a third of the six SEC teams in the top ten of those preseason rankings—something Corbin largely attributes to a number of returnees and the busy transfer portal. While Vanderbilt boasts the return of Second Team All-American Dominic Keegan to its infield, other SEC powerhouses flaunt similar—or even more talented—upperclassmen depth entering this season.

“There’s two things that will drive this league even to a higher level. Number one, seniors—I think that’s first,” Corbin said. “The other thing is free agency. We have a free agency situation in college baseball right now with the [transfer] portal just as football does and just as basketball does. There were a large number of kids that flowed into our conference that were really good players either at mid-majors or other Division 1 [programs] and people have really added to their roster. We have not done that and I don’t really want to do that unless it’s a good fit for us but other schools have made good use of the portal.”

As Corbin alluded to, Vanderbilt has continued taking the conventional approach to recruiting and with that, he and his staff have had to refill a roster that lost six players to the MLB Draft with freshmen. The VandyBoys have 16 first-years on the roster to just three seniors—Keegan, Tate Kolwyck and Javier Vaz.

“​​You’re going to go through those cycles through your years,” Corbin said. “I think 2019 was similar. We had [Drake] Fellows back and then [Mason] Hickman started some games, but we didn’t have a No. 3 starter and we didn’t know what that would look like and Kumar wasn’t Kumar until midway or at least past midway of this spring season, so we didn’t know what he was going to give us either.”

While freshmen such as Carter Holton will have a chance to make an immediate impact on the mound, a large burden of the pitching work will be fulfilled by a very talented group of sophomores. Although Corbin was not yet ready to give a definitive list of potential starters, he pinpointed Christian Little and Patrick Reilly as a pair that would likely lead this rotation. The hard-throwing righties started 18 games combined last season, but only tallied 42.2 and 43.1 innings respectively.

“I just think from a pitching staff, that’s where an identity is built along the way. You just start to understand who are the guys that can do what, who are the guys who can start and who are the guys that are coming on for you that fit well coming out of the bullpen,” Corbin said. “We have some experience. We just don’t have guys with 80 or 90 or 100 innings under their belt that are coming back. We have guys coming back that have 40 and 50 innings under their belt and more of them than we have in the past but that doesn’t necessarily mean they’re going to be starters.”

Alongside Little and Reilly, Corbin hinted at the fact that many of Vanderbilt’s former relievers such as Nick Maldonado, Chris McElvain and Hunter Owen have been training a bit as starters. Maldonado and McElvain were especially strong for Vanderbilt last season. The pair of juniors return as the VandyBoys most experienced arms by innings-pitched, as each earned ERAs of 2.31 and 4.34 in 50.2 and 45.2 innings last season respectively.

“We’re training a lot of guys from a volume standpoint to be starters. And I think you get to a point where you identify four or five potentially six guys, that could start a game for you,” Corbin said of rounding out his potential rotation. “Early part of the season you’re opening up with five games a week, and then it diminishes to four so getting four or five guys that can start for you is the most important thing.”

Vanderbilt returns five pitchers who notched more than 40 innings pitched last season—Little, Reilly, McElvain, Maldonado and Thomas Schultz—but the Commodores will be without another pair of potential contributors for the foreseeable future.

Corbin confirmed a report from 247Sports’ Robbie Weinstein that junior Michael Doolin will miss his second straight season. Doolin got Tommy John surgery last year but had to go through another round of surgery on his elbow, according to the head coach. In addition, Sam Hliboki, who suffered an injury after just nine appearances last year, will be out until at least May or early June and may miss the entire season. Corbin did not mention any other outstanding injuries and noted that Carter Young’s shoulder has fully healed.

The VandyBoys will continue training in the coming weeks in advance of their season opener on Feb. 18 against Oklahoma State.