The 5th congressional district of Nashville, currently overseen by U.S. Representative Jim Cooper (D), will likely become a Republican-held seat after the Nov. 8, 2022, election if the suggested changes become law. 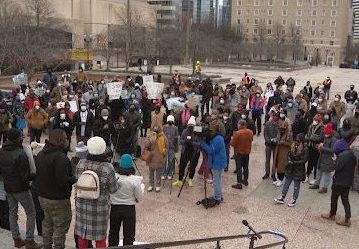 Protesters at the Tennessee Legislative Plaza at the state capitol, as photographed on Jan. 17, 2022. (Photo courtesy of NewsChannel 5 Nashville)

On Jan. 20, the Tennessee Senate approved Republican-backed Senate Bill (SB) 0781 which outlines new U.S. congressional districts in the state for the next decade. Despite strong opposition from Democrats and minority groups, the legislature plans to split the city of Nashville into three congressional districts.

By dividing the city, parts of Davidson County—which traditionally vote for Democrats—would likely be diluted by surrounding rural areas, which are more Republican-leaning.

Vanderbilt is currently located in the Nashville-based 5th Congressional District. According to an email sent to The Hustler from the Tennessee Senate Redistricting Committee, students who vote in Tennessee elections with their campus address would be moved to the 7th Congressional District under the new plan. The proposed 7th District—currently held by U.S. Representative Mark Green (R)—would group part of Nashville with Republican-controlled areas west of the city.

Tennessee state law requires that new congressional, state senate and state house district maps be redrawn by the General Assembly every 10 years in accordance with new population data from the U.S. Census.

“The damage this map does to the political influence of minority groups in Nashville is devastating. Our robust, diverse communities in Nashville are represented and affirmed in Washington, DC today when Nashville has its own voice in Congress,” Cooper said. “What Republicans could not win in local elections, they are stealing through gerrymandering.”

The Tennessee House of Representatives is set to consider the congressional maps today, Jan. 24, at 5 p.m. CST. With a 73-26 supermajority in the House, Republicans are expected to approve of the redistricting plans without obstacles. Governor Bill Lee (R) will likely sign the Republican-backed bill into law when it reaches his desk. The Tennessee Democratic Party plans to sue to block the congressional maps from going into effect if the suggested changes become law, claiming the changes amount to racial gerrymandering.

Tennessee House Speaker Cameron Sexton (R) defended the splitting of Nashville, stating that there would be three U.S. Representatives with constituents in the city compared to the current one representative.

“Davidson will gain more representation; it never hurts to have more people in Washington fighting for you,” Sexton said. “It works in rural communities. It’s worked in Shelby County.”

Tennessee Lieutenant Governor Randy McNally (R), who is scheduled to speak at an event hosted by the Vanderbilt College Republicans (VCR) open to the campus community on Feb. 9, similarly endorsed the proposed congressional districts in a statement following their release.

“The recommended maps are fair and legal, disturb no currently serving legislator and preserve, as much as possible, current district composition,” McNally said.

More than 100 people attended a protest at the Tennessee state capitol on Martin Luther King Jr. Day to express disapproval of the Republican proposed redistricting plan. The Nashville Justice League organized the protest, dubbing it “Fight Back, Stop These Maps!” Lisa Sherman-Luna, executive director for Tennessee Immigrant & Refugee Rights Coalition Votes, attended the demonstration and voiced her opposition to the plan due to its effect on minority voters.

“The Tennessee legislature has split Nashville into three separate congressional districts, really diluting the power of Black and brown voters in our city,” Sherman-Luna said to NewsChannel 5 Nashville. “We’re out here to tell them this is not what democracy looks like. It’s incredibly important that our communities have fair representation and we need to keep our maps whole.”

Senior Jo’-Hannah Valentin, president of the Vanderbilt Black Student Association, spoke in an email to The Hustler about the need to consider the thoughts of underrepresented groups in relation to the proposed bill.

“Many times, decisions are made without the opinions and knowledge of the people who live in the affected areas,” Valentin said. “I think protesting this new change brings more voices into this conversation, and supports what Dr. Martin Luther King Jr. and his daughter Bernice King work towards. Everyone deserves to have their voice heard, and that can be seen in having voting power.”

According to a FiveThirtyEight analysis of the redistricting plans, Tennessee’s 5th Congressional District’s partisan lean will change if the bill is passed. Currently, the 5th District is 17 percentage points more Democratic than the national average, but FiveThirtyEight predicts it would change to around 15 points more Republican under the proposed plan. FiveThirtyEight measures partisan lean as the average margin difference between how an area votes and how the country votes overall.

Currently, seven Republicans and two Democrats make up Tennessee’s U.S. House delegation. Republicans need to gain only five seats in the November midterms to take back control of the House chamber in Washington, and this new map would likely give an additional seat to Republicans.

Cooper is the chairman of the U.S. House Strategic Forces Subcommittee and has easily won re-election to the U.S. House in each of his 10 terms. However, due to the changing maps, first-year VCR member Daniel Sak believes that Cooper’s extensive time in Congress has likely come to an end. The group did not offer any insight into their opinions on the proposal.

“I don’t see a path to reelection in the 5th and there’s no neighboring bluer district for him to switch into,” Sak said. “If the proposed map or something similar passes, I’m curious if Cooper will decide to run for reelection at all.”

The Vanderbilt College Democrats did not respond to The Hustler’s request for comment about the plan.