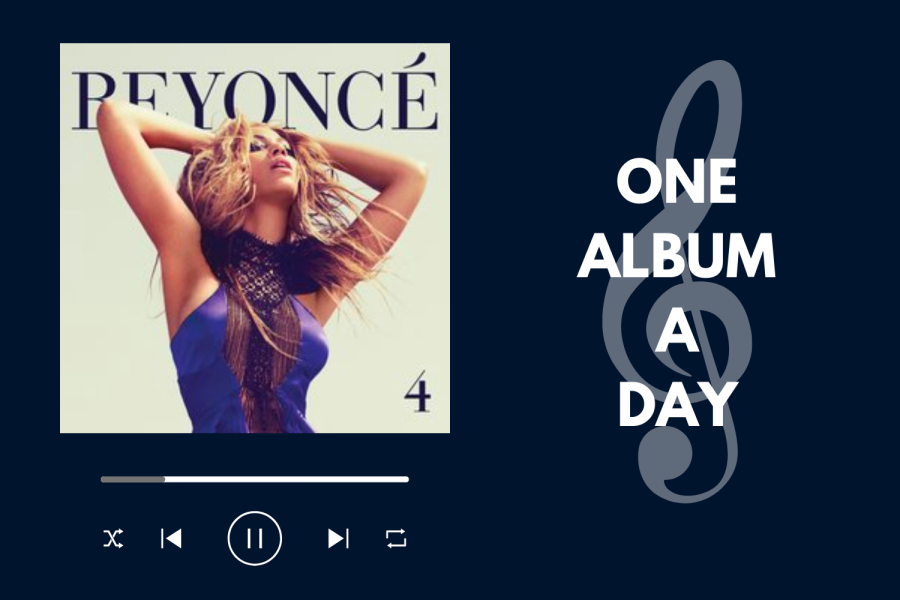 Beyonce's "4" was an integral part of this week's album lineup.

Welcome to the only reason I’ll actually keep up with a New Year’s Resolution: one album a day, 2k22. Follow along as I give my hottest and most unexpected takes on 365 different albums through the year. Best case scenario? I sift through a couple hundred albums and tell you which songs are worth the listen. Worst case scenario? The New Year’s Resolution curse comes true and I get to trash some beloved albums for the world to see. Win-win!

Last week, I listened to albums ranging from Cage the Elephant’s “Melophobia” to Tyler, the Creator’s “IGOR.” Let’s see what this week has in store.

I am not a hyperpop stan. Don’t look at me for that kind of music when we’re racing down the highway at midnight; you just know I’m gonna play “Ride” by Lana Del Rey. It’s only slow jams in this police chase, and I stand by that. But, “Art Angels” gave me a few hits that I just couldn’t get out of my head. My image of Grimes will always be her look when she pulled up to the the 2021 Met Gala with a sword somehow symbolic of America, but her music gives us a moment of respite from her cheugy fashion choices to focus on whatever crazy topic her latest album was about. Although she may hate the album now, “Art Angels” left an impression on me about the diversity that can be found within hyperpop.

Much like most of the music I already listen to, I was drawn to Phoebe Bridgers after excessively listening to “Motion Sickness” on TikTok. But, after listening to this album, I was able to connect to Bridgers’ melancholic quality that makes her so iconic. Listening to “Stranger in the Alps” feels like you’re just that; Bridgers sets forth intense feelings of change and renewal. I love when artists are able to solidify their sound when they release their second album, and Bridgers does that exceptionally well here.

As we all know, my music taste generally leans on the sadder end of the spectrum. To combat this effect on my overall mental health (sometimes the Hozier just hits hard you know?) I have one or two albums that are sure to lift my mood. In 2021, Doja Cat’s “Planet Her” became my top album just because it was reliable in that regard.

Beyonce’s “4” achieves the same effect with absolutely unmatched vocals. Of course, the bops that we all know and love still get the coveted best track slot, but songs like “I Care” and “Start Over” round out the album to make it into the masterpiece that it is.

Notable Bops: I Care, Start Over

Jan. 11: “Something for Thee Hotties”

“WAP” thrusted Megan Thee Stallion into the spotlight, winning her numerous awards and giving Cardi B a much needed renewal after “Invasion of Privacy” in 2018. I have never claimed to know what it means when a rapper has “good flow” but Megan’s numerous freestyles in “Something for Thee Hotties” has perhaps set my vocabulary straight. She’s able to innovate on her basic formula throughout this album, and this originality, coupled with her excellent crisp control of lyrics, sets this compilation of freestyles into something equally excellent and unique.

Can you tell I was excited to get back to campus with this one? Dolly Parton has been such a huge part of Tennessee’s  identity, to the point where her name is the next words out of my mouth after “Vanderbilt’s in Nashville, Tennessee.” That’s why it so pains me to say that I just didn’t love Jolene. Of course, there are some iconic tracks on there, like the title track and “I Will Always Love You,” but sometimes even the best students can’t bring up the class average. There were definitely some likable songs, but Jolene outside the context of the icon that is Dolly Parton was meh. Please don’t hunt me down, Dolly fans.

Notable Bops: Randy, Living on Memories of You

Notable Flops: River of Happiness, It Must Be You

Mitski for me was always hit or miss. I love “Washing Machine Heart” and “Losing Dogs” as singles, but I didn’t know Mitski could deliver at the level of an entire album. To my surprise, the first song on “Be the Cowboy,” “Geyser,” blew my low expectations right out of the water. You can feel the packed emotions Mitski layered into this album and its range allows you to really simmer in them. I’m looking forward to her next album’s release in early February.

Notable Bops: Old Friend, Me and My Husband

Clearly, I wanted to end the week with something quirky. I equate a lot of Dodie’s music to the kind you would hear shopping around in a TJMaxx. Dodie does a great job of building rising action in her music, and every song’s chorus comes at just the right moment. She deserves to blow up on cottagecore-tok again and I, for one, am here for it.

Notable Bops: Would You Be So Kind, You

This week was definitely harder to keep up with than last week’s easy-breezy break-induced relaxed listening sessions. But, I refuse to quit on something there is documentation of. Until next week!