Hitting the Road: Commodores look for bounce-back win in Gainesville

After their third consecutive home loss, Jerry Stackhouse and the Vanderbilt Commodores head to Gainesville for a matchup with the Florida Gators on Saturday. 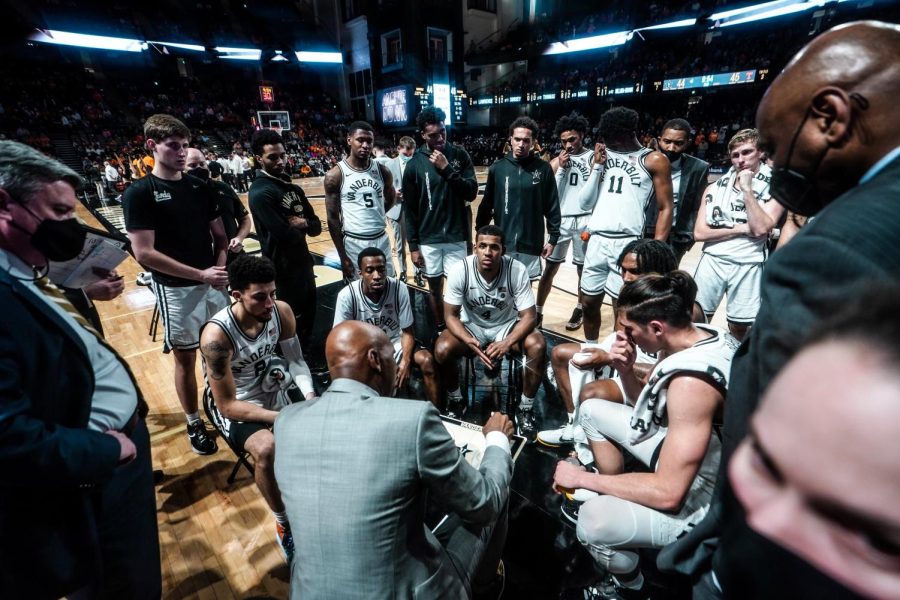 Vanderbilt men's basketball huddles during a game against Tennessee on Jan. 18, 2022. (Vanderbilt Athletics)

Home cookin’ is often a phrase used around college sports. But for the Vanderbilt Commodores (10-7, 2-3), Memorial Gymnasium has been anything but a place to dial up victories this season. After Tuesday night’s 68-60 loss to No. 24 Tennessee, head coach Jerry Stackhouse’s team has lost three straight home games, bringing their record in Nashville to just 5-6 on the season—including three losses while students have been absent from the arena.

“Until everybody’s back and all of that, it is what it is. It doesn’t have so much bearing on what we do. We’ve got to create our own enthusiasm,” Stackhouse said regarding his team’s troubles at home after their most recent loss. “Just like we do on the road, we have to create our own enthusiasm. So it’s not about who’s not in the stands, who is in the stands. We have to control what we control on the court.”

Luckily for Stackhouse’s group, Vanderbilt will head on the road for a pair of games against Florida and South Carolina before taking the court again at Memorial next Saturday. First up is a trip to Gainesville, Florida, for a battle with the Gators (11-6, 2-3).

Both teams sit among the middle of the pack in the SEC thus far and are struggling with injuries. On the Vanderbilt side, the long-chronicled foot injury to Liam Robbins has put quite a damper on the Commodores’ expectations. Additionally, fellow transfer Rodney Chatman returned from a knee injury for five games, helping Vanderbilt to a 4-1 record, but is now nursing a hamstring injury.

Stackhouse spoke on this after his team’s loss to No. 24 Tennessee, somewhat acknowledging the fact that, despite being tied with a talented Volunteer team with just one minute remaining, there isn’t much more his team can do with the roster as it stands. He also pointed out that he is hopeful at least Robbins will be back in the lineup in the next two or three weeks.

“I just think right now as presently constructed, we have to play almost perfect basketball, and that doesn’t happen all the time,” he said when asked how his team can get over the hump in close conference games. “Until we get those pieces in there, we have to do a lot of things right. I don’t think we necessarily had to be perfect tonight. We weren’t perfect… But our margin for error is a little bit less until we get those other bodies back.”

For head coach Mike White and the Florida Gators, All-SEC first teamer Colin Castleton missed his first game of the season on Tuesday due to a shoulder injury. The 6’11” senior is averaging over 15 points and nine rebounds per game and very well might miss Saturday’s game against Vanderbilt.

Even without their prized big man, however, the Gators found a way to pick up an impressive 80-72 win over Mississippi State this week. Despite trailing by eight with under nine minutes remaining, the Gators relied on seniors Anthony Duruji, who tallied a season-high 22 points, and Tyree Appleby to get the win.

As they have done all season long, the Gators leaned on experience, ball movement and athleticism to claim victory over the Bulldogs. Florida ranks as one of the top-20 most experienced teams according to KenPom’s experience statistic and over 58% of their buckets are assisted on, which leads all SEC teams during conference play. They also boast four starters who are 6’5” or taller even without Castleton in the lineup.

However, despite all they do well on the offensive end, they have been subpar at the defensive end of the floor through five SEC games. In particular, they are allowing SEC opponents to score 108 points per 100 possessions—third-to-last in the SEC—mostly because of their failure to defend the 3-point line, where opponents are hitting 34% of their attempts.

That will be a welcome sight for a Commodore team that has capitalized on just 17 of their last 56 (30%) 3-point attempts over the past two games. The Gators will also be a welcome sight for Vanderbilt guard Scotty Pippen Jr. Last year in Gainesville, Pippen Jr. logged a then career-high with 32 points and in five career games against the Gators, he has averaged 20 points per game.

Getting the SEC’s preseason player of the year going will be of the utmost importance for Stackhouse and company, as outside of a 32-point effort against Kentucky, the junior is shooting just 16-of-44 (36%) with 24 turnovers in SEC play.

Alongside Pippen Jr., the Commodores will need a more balanced performance from the starting lineup. In each of the past two games, a Commodore frontcourt player has picked up two fouls very early on—Myles Stute did so in the first three minutes against Tennessee while Quentin Millora-Brown picked up a pair just two minutes into Vanderbilt’s game against Georgia.

This has gotten the Commodores into all sorts of lineup problems of late. Trey Thomas has seen an uptick in minutes amidst these foul issues and while the sophomore is hitting 41% of his 3-point attempts in five SEC games, the Commodores have still been outscored by a destructive 31 points when he is on the floor. Vanderbilt will struggle if Stute, Millora-Brown and Jamaine Mann get into foul trouble early.

Not only is this a chance at a bounce-back victory over a team Vanderbilt has failed to beat since 2018, but it’s also a chance for the Commodores to continue hunting for a bye in the first round of the SEC Tournament. The first day of the SEC Tournament is reserved for the league’s bottom four teams and Vanderbilt has played on that first day for four straight years. With both Florida and Vanderbilt sitting at the middle of the pack thus far in conference play, a win for either side would boost their chances of not playing on Wednesday come the first week of March.

The Commodores and Gators will tip things off at 12 p.m. CST on Saturday.