Despite a gritty effort on the defensive end of the floor, the Vanderbilt Commodores were unable to best their in-state foe at Memorial Gymnasium on Tuesday night. 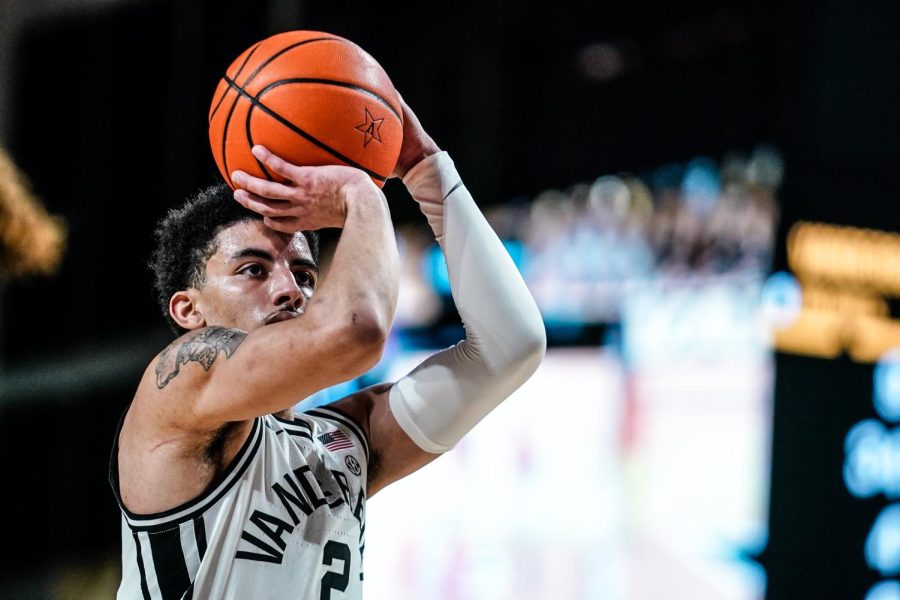 In what became a back-and-forth defensive affair, the Vanderbilt Commodores were unable to take down the No. 24 Tennessee Volunteers on Tuesday at Memorial Gymnasium, falling 68-60. Turnovers and fouls killed the Commodores down the stretch, as they logged a season-high 21 giveaways against a Volunteer defense that was relentless. There were 49 fouls called and Tennessee was able to capitalize on 25-of-29 free throw attempts.

“We are disappointed. I thought we did some good things on the defensive end but careless turnovers and second chance points—things we talked about coming into this game,” Jerry Stackhouse said after the game. “I thought we competed hard, but didn’t compete as smart as we have and we need to get better in that department.”

At the other end, Scotty Pippen Jr. and the Vanderbilt guards faced tons of pressure as they entered the paint and the Commodores were only able to convert 18 field goals on 37% shooting. Jordan Wright got himself going early in the first half, totaling 15 for the game, but it wasn’t enough for the Commodores. Tennessee entered the bonus very early in the second half and got double-digit performances from Kennedy Chandler, Santiago Vescovi, Uros Plavsic and Zakai Zeigler in the victory.

The game began with a surprise on the Commodore side as former walk-on and recent scholarship recipient Drew Weikert earned his first career start alongside the Commodores’ normal starting group. The senior notched two steals and a rebound in his 11 minutes of play and helped the Commodores to an early advantage as freshmen Shane Dezonie and Gabe Dorsey played just three and four minutes respectively.

“Drew’s been working really hard. He had a good week of practice and I thought he did a great job out there,” Stackhouse said. “Just a message. As we get to this point in the season now, our younger guys aren’t going to just be granted minutes on their merit. You have to earn it and I think thats the message that, hopefully, our younger guys saw.”

Midway through the first half is when the Commodores began struggling to find offense in a game that was always expected to be a defensive battle. A pair of four-minute scoring droughts followed not long after by a three-minute drought allowed Tennessee to retake the lead thanks to some nifty ball movement and stingy defense. Poor shooting from both sides—35% for Vanderbilt and 37% for Tennessee—resulted in a low-scoring half for the in-state foes as Tennessee held the lead 33-32.

Fouls got the best of the Commodores all night long as forward Myles Stute was only able to log eight total minutes after picking up three fouls in the first half and two in the second, while his replacement, Jamaine Mann, also nearly fouled out in the second half.

Vanderbilt started the second frame quickly, however, tallying stops on defense and putting together a handful of buckets at the other end. The Commodores took the lead following a 7-2 spurt but handed the lead back to the Volunteers after yet another four-minute scoring drought.

The fouls continued to pile up for both sides with Stute picking up his fourth just minutes into the second half, and with Pippen Jr. and Wright both taking a break just five minutes in, Trey Thomas carried a bit of the scoring load for Vanderbilt.

Thomas got to the rim and canned a contested 3-pointer to keep Vanderbilt neck-and-neck with the nation’s 24th-ranked team, 45-44, with under ten minutes remaining and but for a Pippen Jr. 3 that tied the score at 60 for a brief moment, the Commodores would never get closer. Tennessee exploded for an 8-0 run to end the game and handed Vanderbilt yet another defeat at home, bringing the Commodores’ home record to just 5-6.

Vanderbilt was once again without coveted transfers Liam Robbins and Rodney Chatman and Stackhouse explained afterwards that he feels like his team has razor thin margins for error without the two. The Commodores were desperately missing a presence inside to match up with Plavsic and a secondary ball handler to aid in turnover prevention.

“We have two big pieces that we are missing,” Stackhouse said. “As presently constructed, we have to play almost perfect basketball and that doesn’t happen all the time. We need guys to not get in foul trouble, certain things not to happen.”

Tuesday’s game also marked the final men’s contest that students were barred from attending. The Commodore men and women have so far combined to go 0-4 since the Commodores Care period was instituted.

“I feel like we aren’t really having pride when we have home games,” Thomas said after the game. “When we go away, we feel like we are underdogs so we have an extra fight in our step and are more pumped for away games, maybe. The crowd, as you saw, was all orange, the Kentucky game was all blue, so it’s hard to really take advantage of a home court advantage when the other team is in favor.”

Vanderbilt will hit the road for its next tilt, a matchup with Florida on Saturday. The Commodores are currently 5-1 away from Memorial Gymnasium and will look to make it 6-1 against the Gators at 12 p.m. CST on Saturday.