Taking care of the ball, cleaning the glass to be key as Vanderbilt welcomes No. 24 Tennessee

The Vanderbilt Commodores will hit the hardwood once again on Tuesday evening as they look to beat in-state rival No. 24 Tennessee for the first time since 2017. 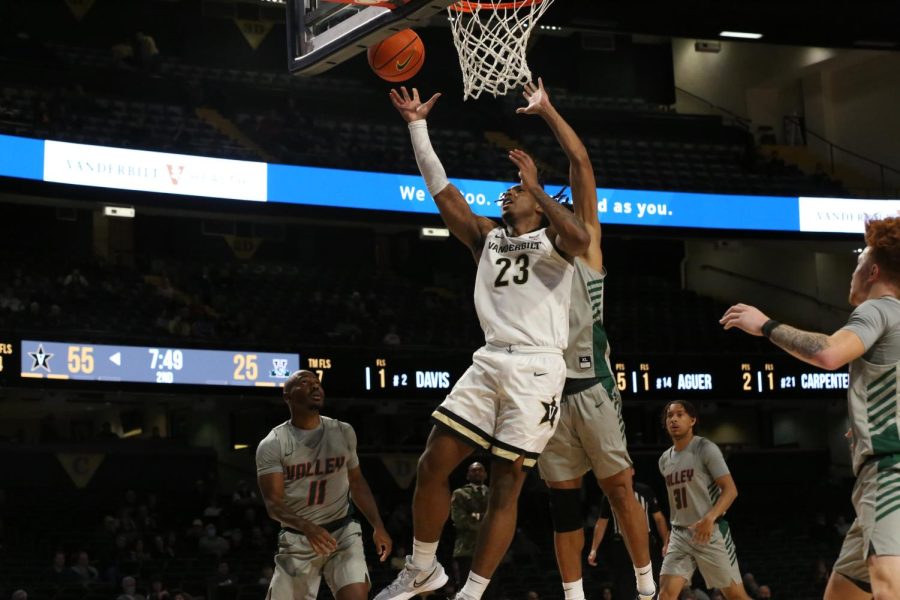 Vanderbilt forward Jamaine Mann goes up for a layup in a game against MVSU in November 2021. (Hustler Multimedia/Hallie Williams)

A win is a win, and that was the mentality for the Vanderbilt Commodores (10-6, 2-2) following their 73-66 victory over Georgia in Athens on Saturday. The Commodores were able to down one of the SEC’s struggling teams, outscoring the Bulldogs 45-30 in the second half en route to their second conference victory.

The show will go on for head coach Jerry Stackhouse and company, beginning on Tuesday with an opportunity to claim a victory over a ranked opponent. The No. 24 Tennessee Volunteers (11-5, 2-3) will head west on I-40 for the evening affair at Memorial Gymnasium as the Commodores look for their first win over their in-state rival since 2017.

After following up a win in Fayetteville two weeks ago with a pair of losses that left much to be desired, Saturday’s second half provided a glimpse into when Stackhouse’s squad is most successful, and that starts on the defensive end of the floor. Vanderbilt tallied 17 second-half points off of eight Bulldog turnovers. Jordan Wright and Scotty Pippen Jr. led the charge in transition, tallying six and seven assists respectively as Vanderbilt tied a season-high with 17 assists against Georgia.

“I thought our guys just started to compete [in that second half] and really took the individual challenge,” Stackhouse said at Monday’s press conference. “More so than anything, bringing energy to whatever we do…I just thought that we took the personal challenge to guard the guy in front of us man-to-man…That type of pressure and energy that we brought to the defensive end led to some easy opportunities in transition.”

Tuesday’s matchup will be quite different, however, as by every statistic, Tennessee’s defense ranks among the nation’s best. They surrender just 89 points to opponents per 100 possessions—fifth best in the country—and force turnovers on an absurd 25% of opponent possessions. Taking care of the ball will be essential for the Commodores as they are just 1-3 this season when turning the ball over 15 or more times.

“The biggest challenge that’s been for us in the games that we’ve lost this year is just our turnover percentage, and that’s one of the things that Tennessee does a good job of,” Stackhouse said. “They put up huge numbers, almost 40 points a game, between offensive rebounds and points off of turnovers. And the games that they’ve lost, they probably get about half of that.”

As the head coach said, Vanderbilt’s archrival also has a knack for offensive rebounding. The Volunteers average 12 offensive rebounds per game and boast three forwards—John Fulkerson, Uros Plasvic and Brandon Huntley-Hatfield—who stand at 6’9” or greater.

Needless to say, Vanderbilt center Quentin Millora-Brown will need to stay out of foul trouble and do quite a bit of heavy lifting for the Commodores. The former Rice transfer continues to come into his own this winter, and although he notched a pair of fouls in the first two minutes against Georgia, he ended up tallying 11 points, six rebounds and three blocks in the win.

“[Tennessee’s bigs] are really good and they work early. So knowing that they’re going to duck in hard every time, it’s important for me to just make sure I don’t lose any concentration,” Millora-Brown said. “Make sure that team doesn’t lose concentration, so that way, we’re all ready to go instead of getting caught off guard when they duck in for easy bunnies. When you’re off time, that’s when you get those fouls.”

Despite their prowess on the glass and on defense, the Volunteers are coming off one of their worst losses in recent memory, a 28-point schellacking at the hands of the Kentucky Wildcats. Tennessee was able to hit 11 of their 23 3-point attempts in that game, but turned the ball over 20 times to the Wildcats’ 12.

Similar to the Commodores, they will hunt 3-point shots while hitting a very modest percentage—33% to Vanderbilt’s 31%. Head coach Rick Barnes’ team takes nearly 28 shots per game from 3 and has hit 10-plus 3s in seven games this year. Freshman Kennedy Chandler (36%) and junior Santiago Vescovi (37%) will lead the charge from long range for a Volunteers squad that has not lost consecutive games since January 2021.

“We have to take care of the ball, make sure we get shots at the basket and get back on defense ourselves because they want to push it and play with a lot of pace,” Stackhouse said. “They have two of probably the quickest guards in our conference. So we have to make sure that they see bodies in transition.”

As far as injuries go, Stackhouse said on Monday that both Rodney Chatman and Liam Robbins will remain out on Tuesday, noting that both are progressing but are still “a ways away” from a return.

The Commodores and Volunteers will tip at 8 p.m. CST from Nashville.