The Commodores still have work to do if they want to exorcize the demons of their recent past and restore themselves at the apex of collegiate bowling. 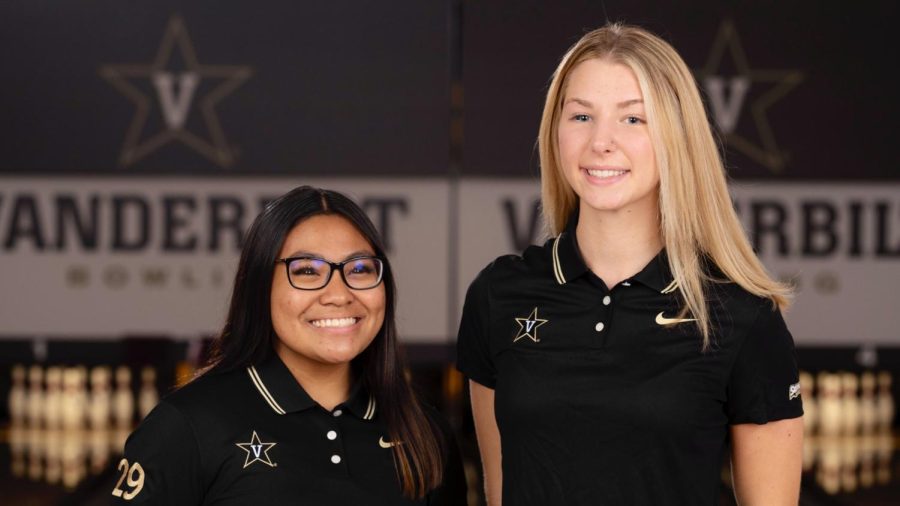 The beginning of the spring schedule for Vanderbilt bowling eerily echoed its final result from last semester: once again, the Commodores went 7-5 and finished in fourth place out of 13 teams.

Not everything in Las Vegas consisted of fear and loathing for one of Vanderbilt’s historically most successful athletic programs, as the team flew out almost a week before the Classic to compete at the United States Bowling Congress Team Trials. Freshman Paige Peters and sophomore Jennifer Loredo boasted stellar averages over the five-day tryouts to earn coveted spots on Junior Team USA, joining teammate Caroline Thesier who qualified earlier in the season. Amanda Naujokas and Mabel Cummins will also compete for Junior Team USA.

“Watching them be successful throughout the week was really cool,” Thesier said in reference to Peters and Loredo. “I think it was nice to get to share that experience with them and knowing that now we get to be teammates outside of Vanederbilt and compete together for something that big.”

A mere day after wrapping up the USBC Team Trials, the Commodores—ranked No. 5 in the December National Tenpin Coaches Association Top 25 Poll—were met with a first-day slate of four top-10 teams out of five opponents. The result was an impressive 3-2 finish.

The festivities started with a convincing victory against T-No. 10 Maryville out of Saint Louis, MO, in which the Commodores led wire-to-wire and finished with a 113-pin advantage. Things proved more difficult in the following matchup against No. 9 Mount St. Mary’s, with Vanderbilt down 12 pins after the first game but ultimately rallying to win 980-927 in the five-game set.

After netting two top-10 victories, the Commodores fell just short in an excruciatingly close series with No. 2 McKendree—moving Vanderbilt to 0-3 on the year against the Bearcats. The matchup was nearly as close as mathematically possible: both teams were tied after the first two games of the series and again after the completion of all five. The Commodores then lost in a truncated tiebreaker format 97-92 to fall to 2-1 on the day.

That’s when things got completely out of hand.

One would think that 1,171 points—the second most put up by any team on Saturday—would be enough to secure a victory against T-No. 10 Stephen F. Austin; unfortunately, the Commodores ran right into an all-out blitz by the Lumberjacks, who dropped a mind-boggling 1,180 points. That means the Commodores lost while still averaging 234.2 points per game—an astounding feat in even a single game. Luckily, they were able to let out their frustration in a relatively easy matchup against unranked Prairie View A&M and finish the opening day at 3-2 and third in the total pin count.

“You almost never see a match like that,” head coach John Williamson said regarding the shootout with Stephen F. Austin. “Usually, one team blows the other out. Very rarely do you see two teams get close to 1,150 [pins].”

The competition may have eased up a little on Sunday, but the Commodores certainly didn’t begin to play down to their opponents. Wins against No. 25 Monmouth and unranked Spalding were achieved via lights-out shooting in the day’s first two matches—1,086 to 1,007 and 1,079 to 736, respectively—while the team slowed down a bit to a mere 910 points in a bye matchup without an opponent.

The reality of a stacked field of competition quickly came rushing back to the Commodores in game four, as they faced No. 3 Nebraska in a rematch of last year’s national quarterfinals. Rather than the close series fans were treated to in their last meeting, the Cornhuskers remained largely in control throughout the duration of the five games, ultimately winning 1138-991. Vanderbilt once again rebounded in the final match of the day with an easy victory over unranked Texas Southern.

With nine games and a bye in the books, the Commodores stood at 6-3 and third in the pin count.

Monday’s first series—now best of seven—was a rematch against No. 9 Mount St. Mary’s in which Vanderbilt quickly found itself in an 0-2 hole. After fighting back to make the series 1-2 with an electric 253-point performance, the Commodores found themselves back in the gallows with a tight, 9-pin loss in the fourth game. Thankfully, for every LeBron James in Cleveland there is a Mabel Cummins in Nashville, and The Mount squandered their lead with three consecutive Vanderbilt victories—including a one-point victory in the sixth game.

The Commodores then were given a chance to get revenge against No. 2 McKendree and claim a spot in the title match; unfortunately, the Bearcats proved to be too much to handle for the fourth time this season. Despite attempting another valiant comeback to tie the series after going down 0-2, Vanderbilt dropped games five and six by a combined 70 pins to be relegated to the third-place matchup.

Another chance at revenge came in the final round, as the Commodores faced off once again against No. 3 Nebraska. Vanderbilt put up a valiant effort in the first game as they rode 211 points to a 1-0 lead, but the walls came crashing down as they failed to ever again reach that total. By the end of five games, Nebraska walked away with a 4-1 series win and a 2-0 record against the Commodores this season.

Although a fourth-place finish behind three top-10 ranked teams would be considered a cause for celebration by most programs, Williamson and company continue to hold a championship-or-bust mindset that refuses to accept losing play in any capacity.

“We’ve got a young group so we’ve got to figure out a way to be more consistent,” Williamson said. “A lot of the time when you get to a team that’s evenly matched it’s about who will make the first mistake. We’ve seemed to be the team to do that.”

There were still causes for some celebration among the team, as both Thesier and Cummins finished in the top-10 of all individual performers at the competition.

“After having a meeting with my coaches and then over break working on some new mindset goals, I was able to go into the traditional day with a different mindset than I’ve had,” Thesier said.. “I’ve been learning how to approach each shot differently so that I can be successful over the course of the entire day instead of just a couple of games.”

Vanderbilt bowling will be back in action Jan. 21-23 as they travel to New Jersey for the Northeast Classic. Every match can be watched live via the team’s YouTube channel.