The Commodores fought hard but faced an 18-point deficit at halftime and could not keep up with the Tennessee Lady Volunteers on Thursday night. 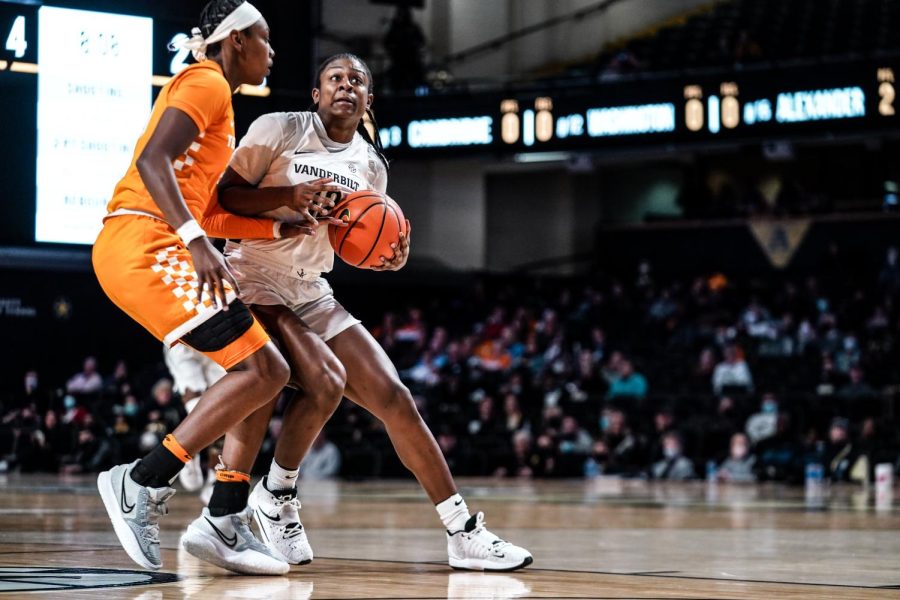 Demi Washington looks toward the basket against Tennessee on Jan. 13, 2022. (Vanderbilt Athletics)

Following a defeat at the hands of the Mississippi State Bulldogs on Jan. 9, the Vanderbilt Commodores (10-7, 1-2) fell to the fifth-ranked Tennessee Lady Volunteers (16-1, 5-0) 65-51 for their second consecutive SEC loss.

The two teams traded buckets early in what started as a back-and-forth affair. Just under six-and-a-half minutes into the game, the score was tied 9-9; however, the Commodores went on a scoring drought for the final two minutes and 41 seconds of the first quarter to trail 18-11 after one.

In the second quarter, the Lady Volunteers went on a 12-1 run over roughly five minutes of play and made eight of their last nine field goals going into halftime. The Commodores, on the other hand, made just two of their final 12 shot attempts to fall behind 41-23 going into the break.

“At the beginning of the game, I thought we were a little passive and passed up on some open shots,” head coach Shea Ralph said after the game. “And then we took them, and we just didn’t make enough. We were 3-of-22 from the 3-point line. We missed free throws, so that’s going to be hard to win games when you’re not making shots. ”

Despite an 8-0 run over two minutes and 22 seconds in the third quarter, the Commodores were unable to gain much momentum thereafter. It seemed whenever they began to claw their way back into the game, the Lady Volunteers had an answer, and after three quarters, Vanderbilt trailed 53-33.

Down by 20 points, the Commodores showed some fight in the fourth quarter, outscoring Tennessee 18-11, but fell to the Lady Volunteers by a final score of 65-51.

Freshman guard Iyana Moore and senior forward Brinae Alexander led the Commodores in scoring on the night. Moore had 16 points, shooting 5-of-20 from the field, while Alexander had 15 points, making 7-of-18 shot attempts. Alexander fouled out of the game with a little less than four-and-a-half minutes left but finished the night with four steals.

For the Lady Volunteers, junior guard Jordan Horston proved to be a weapon offensively and defensively. She had a double-double with 16 points and 13 rebounds, along with three steals and four blocks, and caused issues for the Commodores throughout the entire game.

As a team, Vanderbilt shot just 26.7% from the field and 13.6% from beyond the arc; Tennessee, on the other hand, shot 41.8% from the field and 33.3% from 3. The main difference in stat lines for both teams was points in the paint: the Lady Volunteers had 28, while the Commodores had just ten.

The difference in points in the paint is in part due to the size of Tennessee’s roster: four of the five Lady Volunteer starters were above 6’0″, while the tallest starter for Vanderbilt was 5’10”.

“We knew Tennessee was long, so penetrating was going to be really hard for us,” junior forward Kaylon Smith said when asked about the Commodores’ game plan. “So our goal was to mainly shoot outside shots, especially if the bigs were sagging on outside ball screens.”

Despite the clear size disadvantage, Smith spoke to the Commodores’ confidence heading into tonight.

“I felt very prepared coming into the game,” she said. “Our coaches did a really good job breaking down the game. We just knew that they were longer than us and definitely taller than us, so we just had to play to our strengths.”