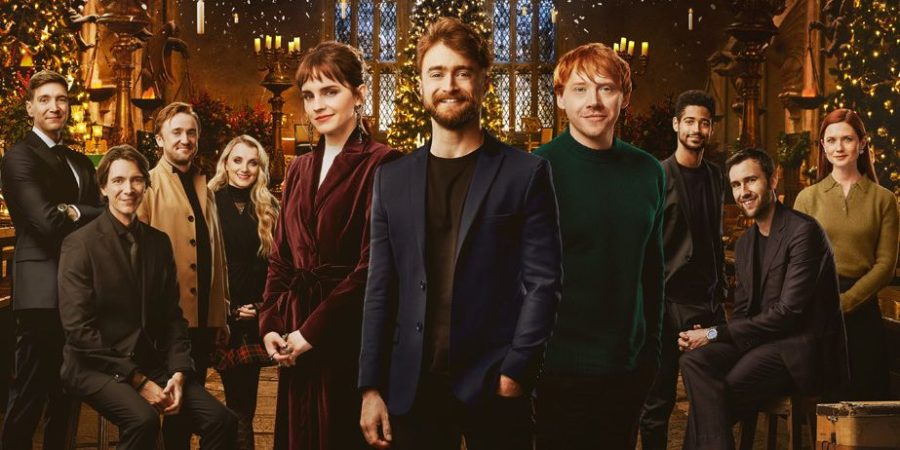 Fuzzy nostalgia enveloped us as the headmaster’s words opened “Harry Potter 20th Anniversary: Return to Hogwarts.” It seemed like only yesterday we were kids watching other kids Wingardium Leviosa-ing on the big screen; the next day we’re all grown up, wishing we could borrow Hermione’s time-turner and relive our first encounters with the wizarding franchise. Now, HBO Max is tugging at our heartstrings again, reminding us of our childhood love for Hogwarts Houses, Quidditch games and Pottermore Patronus quizzes.

With much fanfare, HBO Max announced a Harry Potter reunion back in November. The special, commemorating the 20th anniversary of the first Potter film’s release, joins the many reunions that have recently debuted on HBO Max, including “The Fresh Prince of Bel-Air Reunion” and “Friends: The Reunion.” Potterheads around the globe waited with bated breath as Daniel Radcliffe (Harry Potter), Emma Watson (Hermione Granger) and Rupert Grint (Ron Weasley) returned to the Gryffindor common room after more than a decade. We hoped for the reunion to take us on a Quidditch ride back in time like no others.

The reunion opens with a magical note, as producers send Hogwarts letters to invite cast members back to the enchanted castle. Watson finds hers tucked in a library book, Matthew Lewis (Neville Longbottom) receives his in the back of a cab and Robbie Coltrane (Hagrid) obtains his from a mysterious stranger rushing by his table at a cafe. As each cast member trickles into the Great Hall, we are taken aback at the lavish Christmas decorations reminiscent of holiday scenes from the Potter films.

The reunion is best described as a collection of personalized interviews and throwbacks. In addition to the three primary cast characters, we got glimpses of many supporting actors that we’ve come to love, including Bonnie Wright (Ginny Weasley) and Garry Oldman (Sirius Black). The main trio chatted with other members of the cast on behind-the-scenes memories. Radcliffe’s meetup with Helena Bonham Carter (Bellatrix Lestrange) was particularly wholesome, sharing tender memories of their friendship and connection.

Notably, creators structured the reunion chronologically, with the director of each film taking the masthead of introducing major developments for their respective films. Four directors have had the honor of bringing the popular book series into life: Chris Columbus (“Sorcerer’s Stone,” “Chamber of Secrets”), Alfonso Cuarón (“Prisoner of Azkaban”), Mike Newell (“Goblet of Fire”) and David Yates (“Order of Phoenix,” “Half-Blood Prince,” “Deathly Hallows Parts I and II”). In the reunion, each had the opportunity to highlight personal takes on the relationships they built on set and their attempts to add stylistic elements and embellishments. For instance, Cuarón and Newell emphasized the transition between childhood and the teenage years through darker and ominous plot schemes in “Prisoner of Azkaban” and “Goblet of Fire.”

In terms of structure, the hour-and-forty-minute reunion was divided into four chronological “chapters”: The Boy Who Lived, Coming of Age, The Light and Dark Within and Something Worth Fighting For. This organization is well-conceived because, as any Potterhead knows, they summarize the progression of Harry’s formative years at Hogwarts.

A decade has passed since the franchise’s final wrap. The reunion memorialized pivotal actors like Alan Rickman (Severus Snape) and Richard Harris (Albus Dumbledore in the first two films), who have all passed away since the premiere of “Harry Potter and the Deathly Hallows: Part 2.” We caught glimpses of Rickman’s phenomenal portrayal of Snape and Harris’ comforting demeanor on set. The reunion’s nod to these individuals is greatly appreciated.

While nostalgic and melancholic, let’s just say that you won’t exactly be Stupefy-ed after the special’s end credits roll through. No stunning spell can alleviate the fact that the reunion was neither stunning nor particularly shocking. Any individual who is even remotely interested in Harry Potter would have known about Watson’s crush on Tom Felton (Draco Malfoy), or that the ultimate kiss between Hermione and Ron had embarrassed the two actors. We hear again about how Watson wrote a twelve-page essay about Hermione upon Cuarón’s request, while Grint never completed the assignment, or that Rickman had early insight into Snape’s backstories from Rowling.

The special was also cluttered with scenes from the eight Potter films, causing the reunion to mirror an underwhelming montage of the franchise at times. A simple YouTube search would have yielded most, if not all, of the featured behind-the-scenes footage. Separating the sliver of new revelations from stale old news proved immensely difficult and disappointing.

One unfortunate mishap, which saw producers mistake a baby photo of Emma Roberts for Watson, is perhaps the most indicative of the special’s overreliance on archival interviews. A second mistake of a name mix-up between the brothers who portrayed the Weasley twins followed. While HBO Max quickly remedied these blunders after the special’s initial debut, their consequences lingered, sparking fans to question the reunion’s genuinity. Really, did none of the cast watch the final cut of the reunion?

While the reunion’s trailer had promised a celebration of “the magical moments and life-changing memories with the wizards themselves,” the two-hour show itself only featured eight minutes of the golden trio being interviewed together (yep, we counted). Despite insistence that the cast were and are still family, the chemistry between the trio was not entirely palpable. Throughout the reunion, heart-to-heart moments were brushed aside, as creators attempted to create a lighthearted vibe. At one point, Watson opens up about her struggles growing up under the limelight, recalling that she even considered quitting the franchise while filming “Harry Potter and the Order of the Phoenix.” Yet, the discussion is abruptly cut short by archival footage of the franchise’s final premiere.

Disappointingly, the special falls short of its promise to reunite the wizarding world. Prominent members of the Potter ensemble, including David Thewlis (Lupin), Maggie Smith (McGonagall), Michael Gambon (Dumbledore beginning in the third movie) and Julie Walters (Molly Weasley) were noticeably missing from the special. And then there’s the glaring absence of She-Who-Shall-Not-Be-Named.

Perhaps the biggest head scratcher of the reunion is its use of pre-recorded interviews featuring J.K. Rowling. Tagged as “Filmed in 2019 at Warner Bros. Studio Tour London,” these clips occasionally populated the anniversary special, offering viewers some backstories behind the Potter world’s creation.

Drawing from recent events, we deduce that Rowling’s absence from the special partly stems from the author’s controversial transphobic comments. Since 2020, Rowling publicly made her thoughts on transgender people known via Twitter, where she lambasts current societal perspectives on the operative nature of the definition of “sex.”

While her remarks are unsettling, to say the least, it does feel a tad bit off that the creator of the Harry Potter universe is absent at a major milestone for the franchise. It’s like the President of the United States not showing up to their own State of the Union address. Despite her insensitive words, Rowling’s active participation in the reunion would have definitely taken it to the next level, adding a degree of insight that would have been both genuine and novel.

For instance, we hoped that Rowling would shed some light on how much influence she had when it came to depicting the novel in later movies. Earlier movies like the “Chamber of Secrets” and “The Sorcerer’s Stone” are more accurate portrayals of the books, while much lengthier novels like “The Goblet of Fire” are much more difficult to capture to the fullest extent in the movie. Rowling’s insight into how the production team chose which elements to focus on would be vital to the understanding of the movie production process.

For many of us, J.K. Rowling’s “Harry Potter” series ignited a passion for reading. Rather than dreading page numbers, we dreaded deaths of beloved characters, endings and heartbreaks. And yes, we also dread the years that go by since the last movie was released, because for us, seeing the actors grow old reminds us that we are growing old along with them.

Although seeing our childhood heroes talking about all things Harry Potter was exhilarating, the reunion failed to deliver because of just that: showrunners were blinded by the idea that Potterheads simply wanted to see the golden trio on screen—and nothing else. But we want more. So much more. At family reunions, we aren’t there to just see our third cousins twice removed; we are there to seek something new, something unexpected. Something that this reunion never delivered.