From worst to best: The Harry Potter books ranked

In light of the recent 20-year reunion, I’ve revisited my favorite childhood series to curate a definitive ranking of the seven books. 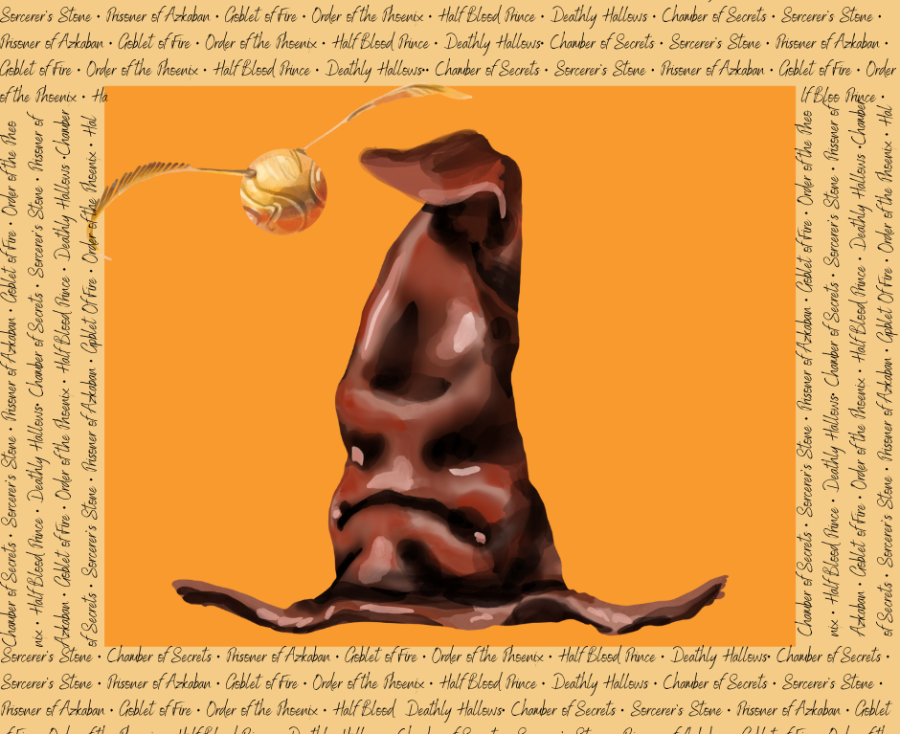 The Wizarding World of Harry Potter is a creation ripe with fantastical plot lines, but grounded with enough relatability to satisfy pre-teen “Potterheads” and adult readers alike. The writing itself also strikes a brilliant chord between sophistication and readability, riddled with subtle humor and nuanced foreshadowing in each individual book and across the series.

With the release of the Harry Potter 20-year-reunion special, the magic that has long been marinating in the back of my mind was once again brought to the forefront. And though no owl ever arrived with my Hogwarts letter, the books have provided me with a personal portkey to enter the wizarding world.

“Harry Potter and The Chamber of Secrets”

In all of my configurations and inner debate, one thing was certain: “The Chamber of Secrets” would inevitably be last. Don’t get me wrong; it’s still a great book. It lays the groundwork for and foreshadows major future happenings: Harry is revealed to be a parseltongue, Fudge is overly concerned with his reputation (so much so he throws Hagrid in Azkaban), Horcruxes are introduced (though not explicitly) and Harry saves Ginny from mortal peril.

Reading this book again in our current moment, I also find it eerily mirrors the situation of many students attending school during COVID-19. Maybe I’m just projecting, but in their second year, Hogwarts students face the cancellation of Quidditch and all evening activities, are escorted to their classes by their teachers, have to report to their dormitories by 6 p.m. every night and live with the constant fear of being sent home at a moment’s notice (sounds familiar). While their invisible enemy is a murderous basilisk and a figment of the Dark Lord and ours is a pandemic, Hogwarts students question how they could be expected to work and take exams at such a time—a complaint to which McGonagall issues a sharp retort that lessons and exams are the very reason why the school remains open (I repeat, sounds familiar).

Where this book lags behind the rest is in its originality and character development. As Harry and Ron braved the chamber, I couldn’t help but feel they were back beneath Fluffy’s trapdoor seeking the Sorcerer’s Stone (only this time Lockhart was there, making the experience far less enjoyable). Furthermore, the wholesome moments of camaraderie between students and the forging of new friendships felt few and far between. While it was a necessary link between the first and third books, on its own, book two is nothing too special.

“Harry Potter and the Order of the Phoenix”

Hem hem. One person caused this book to drop at least two spots in the rankings: Dolores Umbridge. The unbearable nature of her constant interruptions and her foul moral compass is something even Snape and Harry can manage to agree on; it corrupts Hogwarts as we know it. I further resent Dumbledore for ignoring Harry for three quarters of this book (I know he has his reasons, but don’t go from surrogate father to the silent treatment without explanation).

The book also takes on some themes I feel might be too sophisticated to get the development they deserve in a children’s novel—such as loneliness, mental health, insanity and murder. However, I admire J.K. Rowling for acknowledging that children can, and often have to, grapple with real life and tragedy. Furthermore, after suspending Quidditch in their fourth year so the Triwizard Tournament could take place, it is a slap in the face that Harry, Fred and George are again barred from the team this year.

The book does have some saving graces, mostly in the Weasley department. Fred and George provide some much-needed comic relief via their use of first-years as test subjects for their latest inventions, and Ron finally gets his moment in the spotlight when he is donned Gryffindor prefect. And my favorite part of the book—something that almost pushed it up a spot—is Dumbledore’s Army, an unlikely melody of heart-warming community and badassery.

I also think the physical spaces in this book warrant mention. From the unassuming, tucked-in nature of 12 Grimmauld Place to the likewise inconspicuous placement of St. Mungo’s Hospital on a London sidesteet, to the labyrinth that is the Department of Mysteries, the settings are near perfect.

“Harry Potter and the Deathly Hallows”

The end of an era; good beats evil. But, that’s not without a Horcrux hunt, a whole lot (too much) of death and Harry mastering the Deathly Hallows. I’m a fiend for all the full-circle moments: the deluminator, the resurrection stone hidden in the golden snitch, the subtle mention of a locket in the fifth book coming into play as a Horcrux, the sword of Gryffindor and, of course, another baby boy left orphaned at the hands of Voldemort.

While a happy ending at large, I can’t help but feel some of the deaths would have meant more if there weren’t so many of them. Snape’s death was the most emotional for me because it happened before the final battle and because of the memory he finally shares with Harry of his eternal, and painfully unrequited, love of Lily. Hedwig and Dobby are other early shots to the heart.

I almost knew a Weasley death was inevitable (am I a terrible person for hoping it would be Percy?) and the loss of Fred was another tear-jerking moment. But, I found myself almost skimming past the few sentences on the deaths of Lupin (one of my favorite characters), Tonks and Lavender Brown. Can’t say I was too beat up over Bellatrix or Nagini either, though for different reasons.

I found the one chapter epilogue sufficient, as all the romances we had long seen coming were confirmed, there were wholesome father-son, mother-daughter moments and the rest was left to our imagination.

“Harry Potter and the Goblet of Fire”

This book is arguably host to the most important plot point of the series: Voldemort is back. Because the book harbors this, however, it serves as a somewhat awkward bridge between the innocence of adolescence and the impending trauma.

Both Sirius and Dumbledore’s mentorship and protectiveness towards Harry bring a smile to my face, in sharp contrast to the “Order of the Phoenix.” In “Goblet of Fire,” Sirius serves as protector and cool uncle figure, while on the run and trying to protect Harry. In number five, however, he turns sulky, and the tables turn as Harry strives to please him and their communication is cut off due to Umbridge’s censorship.

What I love very most about this book is the suspense and mystery it so naturally curates. To use the Triwizard Tournament as a backdrop for Voldemort’s return and the sheer complexity of this story line—everything from Winky allegedly casting the dark mark, to planting Barty Crouch Jr. at Hogwarts after his escape from Azkaban, to Bertha Jorkins’s disappearance—puts the genius of the story on full display.

Despite a deadly tournament taking place, I also appreciate that there is still a sense of the mundane, day-to-day qualities of Hogwarts in this book: piles of homework that keep students up past midnight, jealousy between Ron and Harry and juvenile dance proposals that make wizards and Muggles alike squirm with second-hand embarrassment.

This book also perfectly sets up the turmoil to come. It serves as somewhat of a modern political allegory—rebellion in the government and corruption of the press. Fudge and Dumbeldore have a huge falling out as well, in part because Fudge believes the lies spread about Harry in The Daily Prophet, and the conflict is set in motion.

“Harry Potter and the Sorcerer’s Stone”

So much information, so few pages: a masterful introduction without the feeling that background is just dumped on us. This book is the creation of the wizarding world as we know it, and the start of an addiction.

I loved the immediate click between Ron and Harry as both were awkward and shy, yet too young to be anything but unabashedly themselves when they first bonded over Chocolate Frog cards on the train. Hermione’s barging in and the longer warming up period was emblematic of the relationships to come.

The rivalry between Draco and Harry, and the larger Gryffindor vs. Slytherin strife is set up mere chapters in. Furthermore, the foreshadowing that He-Who-Must-Not-Be-Named is still out there sets up the main conflict right off the bat.

“Harry Potter and the Half-Blood Prince”

This book kicks off with intensity when Snape makes the unbreakable vow, promising to kill Dumbledore in the event Malfoy can not, and that pace is maintained. This book is almost a villain origin story of sorts. It offers deeper insight into the mindset of Snape and Draco and the tightrope they constantly walk to evoke a deeper empathy in readers. Even Voldemort is granted some humanity when we dive into his memory in the orphanage.

Dumbledore knows his days are numbered but that only speeds up his quest to find the Horcruxes (why he couldn’t have explained this better to Harry, we will never know). The heaviness of inevitable death and the quest for Horcruxes is balanced with some potent reminders that Harry, Ron and Hermione are just kids—notably, when Lavender and Ron start dating and Hermione’s jealousy gets the best of her.

I love that Hogwarts returns to its pre-Umbridge era (yay Slughorn) and Fred and George finally open their joke shop. Other tender moments include when Harry and Ginny share a kiss in the Gryffindor common room and the school comes together in the darkest of times to mourn Dumbledore’s death.

“Harry Potter and the Prisoner of Azkaban”

This book is nothing short of bloody brilliant. Character introduction is key here, finally Lupin blesses us as a good Defense Against the Dark Arts professor, and Sirius and Wormtail make their debuts.

What also makes this book so exceptional is its use of both animals and magical objects. My two favorite magical objects of the series—the Marauders’ Map and the time turner—add so many fun twists and turns to the story and, of course, the invisibility cloak is always at play. Furthermore, Crookshanks and Sirius (in Animagus form) forge a friendship long before Harry, Ron and Hermione discover Sirius isn’t the murderer he’s made out to be, and Ron’s genuine love of Scabbers (before he finds out it’s Peter Pettigrew, of course) is wholesome.

Lupin’s mentorship of Harry throughout the year and Sirius’s clear love for Harry work in such welcome contrast to Harry’s treatment at the Dursleys. The ending evokes such mixed feelings as both Buckbeak and Sirius run free, but the consequences of Wormtail’s escape put in place the rest of the series.

I have now made it to the start of the sixth book in my most recent re-reading of the series, and the only thing that has changed since my first read-through in elementary school is the switching of the positions between “Order of the Phoenix” and “The Deathly Hallows.” But after thorough consideration, I think I finally have the order down.

I’ve also loved noticing the small details and connections that have long since slipped my mind. Despite a few snide remarks from my family suggesting that perhaps I pick up a more age-appropriate book (or some I haven’t already read several times), once again making my way through the series has taught me that the magic of these stories is truly timeless.