The Kentucky Wildcats went on a 19-6 run to close the first half and never looked back, beating Vanderbilt in Memorial Gymnasium Tuesday night. 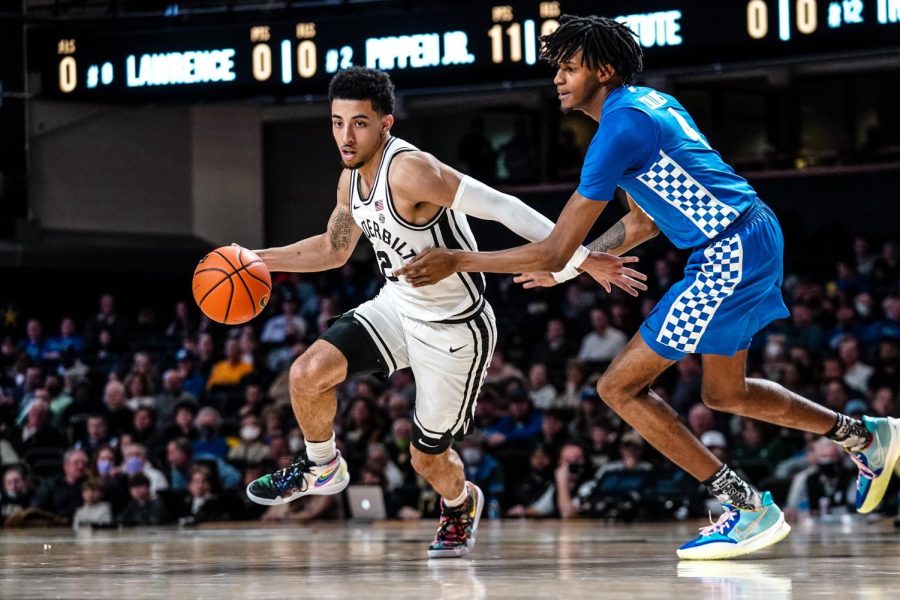 Scotty Pippen Jr. dribbles around a defender against Kentucky on Jan. 11, 2022. (Vanderbilt Athletics)

After dropping an ugly loss to South Carolina in their second SEC game of the year, Vanderbilt was not able to re-find the win column against No. 18 Kentucky on Tuesday, as the Commodores fell 78-66. A 16-2 Vanderbilt run to conclude the game closed the gap on what was otherwise a blowout.

With no students in attendance and plenty of blue throughout Memorial Gymnasium, the Wildcats used a strong performance from the nation’s rebounding leader Oscar Tshiebwe who totaled 30 points and 13 rebounds to get the win. As a team, the Wildcats shot an incredible 53% from the field and hit six of their 12 3-point attempts. Vanderbilt got 32 points from the SEC’s preseason player of the year Scotty Pippen Jr., but that was hardly enough.

The Commodores were without both of their high-profile transfers on Tuesday as Liam Robbins continued his extended absence due to a foot injury and Rodney Chatman sat out for the first time since returning from a knee injury on Dec. 18 with a hamstring injury. Vanderbilt missed both of their presences in a game they appeared unmatched in from the jump. Stackhouse didn’t say when he expects either player to return.

“Rodney’s dealing with a pretty significant hamstring injury. He was just gutting it out and just tweaked it and hurt himself a little more in our last game so we have to give him some time,” Stackhouse said of Chatman after the game.

Offense was a challenge for Vanderbilt all night long and but for Pippen Jr. the Commodores were unable to generate anything easy. Nine of Vanderbilt’s first 11 points belonged to the junior via a trio of 3s, but Kentucky used a more balanced approach to jump all over the home team early.

Kentucky took a 22-11 lead just eight minutes into Tuesday’s matchup. But the unlikely lineup of Quentin Millora-Brown, Trey Thomas, Shane Dezonie, Tyrin Lawrence and Jamaine Mann catalyzed an 11-0 run for the Commodores to keep the Wildcats within arms length. That was as close as it would get, however, before the Wildcats took over for good.

“We had some opportunities early in the game, we fell behind a little bit but fought our way back,” Stackhouse said. “We just need performances. In a big game like tonight, you need to have guys step up and make plays. I thought we had a couple guys step up—Scotty played well, Trey [Thomas] played well for us—but for us, we need that third scorer consistently.”

John Calipari’s team countered that scrappy Commodore run by outscoring Vanderbilt 19-6 over the final five minutes of the half to enter the locker room with a 41-28 advantage. Vanderbilt got just four points from their starters outside of Pippen Jr. in the first half while Kentucky hit four of their five 3-point attempts and totaled 20 paint points in the opening frame alone.

The Wildcats’ paint domination continued in the second half as Tshiebwe took advantage of the smaller Commodore squad by getting deep position and hitting his free throws. Pippen Jr. did his best to carry the Commodores along late in the game, but got little help elsewhere. Thomas chipped in 14 points with four 3s, but Jordan Wright was held scoreless for the first time this season and Myles Stute added just 6 points on 2-11 shooting. Vanderbilt got 18 points combined from its remaining four starters.

“He’s been making some mistakes that are uncharacteristic of a player that has been around as long as he has,” Stackhouse said of Wright. “He’s coming to the ball too much on the offensive end, it’s sticking, not moving it. Just things we will continue to encourage him to get better.”

The Commodores will be back in action on Saturday with their second road game of the conference slate against the struggling Georgia Bulldogs at 6 p.m. CST.