The lawsuit alleges that Vanderbilt and eight other schools were need-aware for waitlist applicants and gave preferential treatment to children of wealthy donors and those not eligible for need-based financial aid. 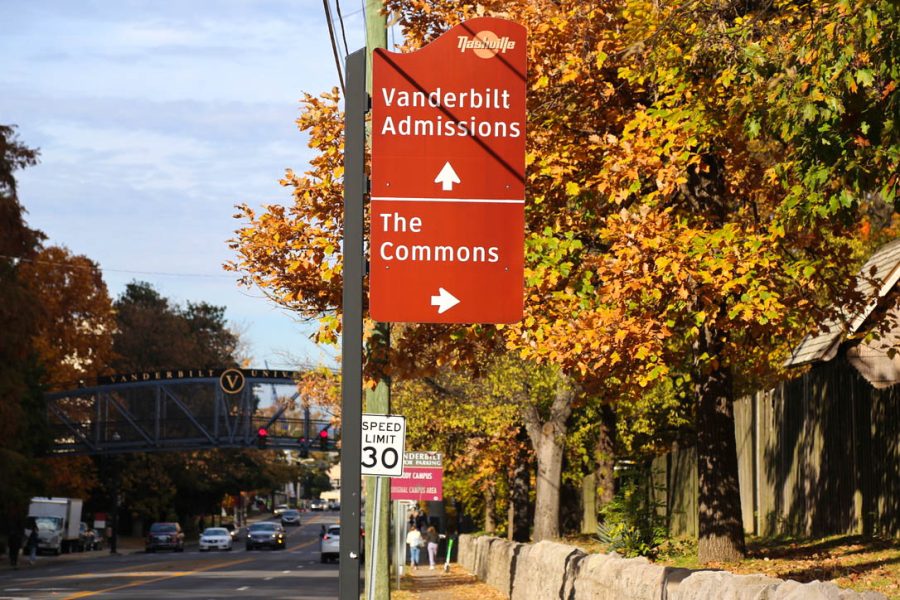 Street signage for the Vanderbilt Office of Undergraduate Admissions, and The Commons, as photographed Nov. 17, 2021. (Hustler Multimedia/Hallie Williams)

A class action lawsuit filed on Jan. 9 accuses 16 major U.S. universities, including Vanderbilt, of illegally colluding to limit student financial aid. The suit was filed in the Northern District of Illinois federal court by three firms jointly representing five former students from several of the schools, including Vanderbilt.

The 16 defendants are or have previously been a part of the 568 Presidents Group, which jointly developed a “Consensus Methodology” in 2003 to determine a formula to decide their undergraduate applicants’ demonstrated need. The group meets several times a year to discuss calculations, according to their website. The lawsuit does not state why all members of the group are not defendants.

The universities claim that this group is protected under Section 568 of the Improving America’s Schools Act of 1994 (the “568 Exemption”), which protects higher education institutions from antitrust violations if they operate with a need-blind policy for domestic students. The antitrust exemption is set to expire in September 2022, unless it is renewed by Congress.

However, the plaintiffs argue that these institutions are not protected under this exemption because at least nine defendants have not operated a completely need-blind admissions process by allegedly favoring children of wealthy past or future donors and other applicants not eligible for need-based aid as well as for being need-aware for waitlisted applicants.

According to the suit, the other seven defendants—Brown University, the California Institute of Technology, the University of Chicago, Cornell University, Emory University, Rice University and Yale University—“may or may not” be need-blind but are still culpable for colluding with the other ten institutions and having knowledge of their violations.

Alleging that the universities are disqualified from protection under the 568 exemption, the lawsuit argues that the group violates antitrust laws by allegedly working to lower or remove price competition within the group and engaging in “enrollment management,” a process that integrates admissions and budgetary considerations.

According to former Assistant Director Of Admissions ​​Kim Struglinski in an April 2018 undergraduate admissions waitlist FAQ blog, Vanderbilt “reserve[s] the right to be need aware when admitting waitlisted students.” Struglinski is no longer employed by Vanderbilt as of February 2019.
E. Gordon Gee, who served as Vanderbilt’s chancellor from 2000-07, told the Chronicle of Higher Education in 2019 that “any president under ‘truth serum’ would concede that, in rare cases, donor connections make a difference in admissions.”
Gee is now president of West Virginia University, which is not part of the 568 Group.

“As president, I did have a certain number of quote-unquote ‘slots’ that I could use for very particular reasons to support a student’s candidacy,” Gee said. “I can’t remember how many I had—six or 10, something like that. And I didn’t use them very often, but I did.”

Gee, Struglinski, the Office of Financial Aid, Office of General Counsel and the Office of Undergraduate Admissions have not immediately responded to The Hustler’s requests for comments.

The lawsuit points to the “generally wealthy” and “privileged” undergraduate student body populations of the defendants, as analyzed in a 2012 New York Times article linked in the suit. The article notes that the median family income of Vanderbilt undergraduates at the time was $204,500, and 23% of undergraduates came from the top 1% of the national income distribution. According to the article, Vanderbilt was ranked fourth among 2,395 other universities included in the report in the highest share of students from the top 1%.

“Elite, private universities like Defendants are gatekeepers to the American Dream,” the lawsuit states. “The burden of the 568 Cartel’s overcharges falls in particular on low- and middle-income families struggling to afford the cost of a university education and to achieve success for their children.”

Undergraduates, alumni and anyone else who has paid tuition on behalf of students since 2003 could be eligible to join the suit as plaintiffs by filling out the form on the “568 Cartel Lawsuit” website. Vanderbilt alumni Michael Maerlander (‘19) and Brittany Tatiana Weaver (‘07) are two of the original plaintiffs. Maerlander directed The Hustler’s inquiries to one of the firms, Roche Freedman. A spokesperson for the firms responded with litigation documents for the case. Weaver did not immediately respond to The Hustler’s requests for comments.

Vanderbilt joined the 568 Presidents Group in 1998 and began implementing the Consensus Methodology in 2003, until it withdrew from the group in 2020. The plaintiffs allege that determinants of the net price of attending Vanderbilt, including all currently enrolled students except the Class of 2025, were established while Vanderbilt was participating in the 568 Group.

“By leaving the 568 Group, Yale is now free to give families more aid than they would have gotten under the consensus methodology,” former Yale Director of Student Financial Services Caesar Storlazzi said, prior to Yale returning to the group.

Vanderbilt boasts a financial aid policy that meets 100% of a family’s demonstrated need and was ranked 5 among private universities in the nation for best financial aid by The Princeton Review.

University spokespeople from Brown, Yale and CalTech stated that their university financial aid systems are not in violation of any laws.

“The complaint against Brown has no merit and Brown is prepared to mount a strong effort to make this clear,” Brown spokesperson Brian Clark wrote in an email to The Brown Daily Herald. “Brown is fully committed to making admission decisions for U.S. undergraduate applicants independent of ability to pay tuition, and we meet the full demonstrated financial need of those students who matriculate.”

This article will be updated as more information becomes available.