The Vanderbilt Commodores have yet to beat Kentucky under Jerry Stackhouse, but have consistently given the blue-blood Wildcats tough games. 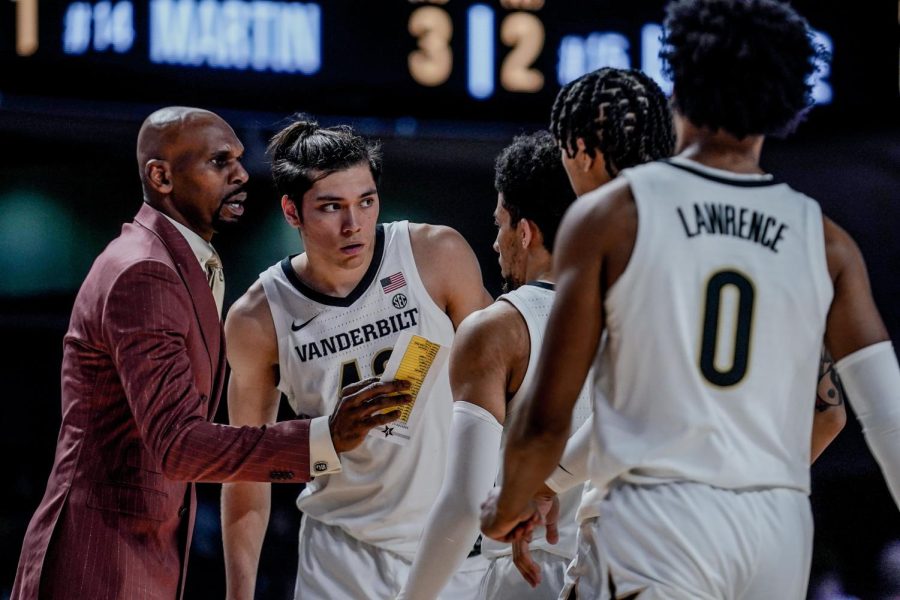 SEC play rolls on for the Vanderbilt Commodores (9-5, 1-1) tomorrow evening as they are set to host the No. 18 Kentucky Wildcats (12-3, 2-1) in an all-important matchup for both sides at Memorial Gymnasium.

For the first time this season, the Commodores will be the game of the night on ESPN with a primetime tipoff set for 6 p.m. CST. Despite putting up a good fight against the Wildcats all four times they have faced them under head coach Jerry Stackhouse—including a pair of games last season separated by less than five points each—the Commodores have not beaten their rival to the north since 2016.

“Kentucky has been one of the best in our conference for as long as I can remember, as long as I’ve been watching basketball,” forward Jordan Wright said on Monday. “Being so close my first two years it’s just given us added motivation, especially last year for me personally. I missed those two free throws last year [late in the game]. I feel like we could have won the game with those makes. So just for me personally, it’s a big incentive going into this game just trying to get that game back from last year.”

The Commodores will enter Tuesday’s matchup looking to regain their winning ways that propelled them to a four-game win streak from Dec. 18 to Jan. 4. Largely on the shoulders of Scotty Pippen Jr., Vanderbilt was able to mount a pair of terrific comeback wins over BYU and Arkansas before getting their momentum halted by South Carolina on Saturday.

South Carolina’s defense grinded Vanderbilt’s inconsistent offense to a measly 39% shooting. The Gamecocks also forced 19 Commodore turnovers—a season-high for Vanderbilt that restricted Stackhouse’s team to a season-low 46 field goal attempts. South Carolina was also able to gash Vanderbilt in the mid-range—something few teams have done against the Commodores so far this season.

“We came in with a good game plan I thought: take away their 3s and we did a good job of that. They just scored at a rate in the 2-point area that nobody’s scored on us all year,” Stackhouse said on Monday. “We’ve already beaten some good teams and I do think South Carolina is a good team so as the season goes on, it probably won’t won’t feel as bad as it did.”

Kentucky will pose many different challenges to the home squad, but similar to the Commodores, head coach John Calipari’s team has been dealing with a busy infirmary.

Although Shane Dezonie (ankle) and Jamaine Mann (knee) both returned on Saturday against South Carolina, Rodney Chatman (knee/hamstring) gutted out 24 minutes and did not look like himself, according to Stackhouse. The head coach didn’t rule any Commodores besides Liam Robbins out for Tuesday’s game, but says that his staff will have to see how Chatman and others respond to treatment leading up to tipoff.

For Calipari, the Power Five’s assists leader Sahvir Wheeler—a transfer guard from Georgia—missed his first game of the season in Kentucky’s win over Georgia on Saturday with a neck injury. There is no verdict on his status yet, but the Commodores are prepared either way.

If Kentucky’s dominant win over Georgia is any indication, even if Wheeler isn’t able to play, the Cats will have a more than capable lead ball-handler in one of the nation’s top freshmen, TyTy Washington Jr. The projected first round NBA Draft pick tallied a Kentucky record 17 assists to go along with 17 points against Georgia.

“We have to be prepared for whoever they put out there. Obviously, Sahvir is a real downhill threat and he’s a guy that really is the engine that gets them going,” Stackhouse said. “Then you look at TyTy Washington and what he’s been able to do and the big assist game that he had, breaking a record, they have a little bit of a rhythm with him in the lineup… If we focus and lock into the things that we need to do on our end, we will be able to handle whoever is out there.”

Inside, Kentucky is anchored by center Oscar Tshiebwe, who leads the nation in rebounding at 15.2 boards per game. He also tallied a season-high 29 points in the Wildcats’ win over Georgia. Tshiebwe leads a Kentucky rebounding unit that ranks top 20 nationally in defensive rebounds per game. The Commodores’ have been outrebounded in four of their five losses this season while Kentucky has been outrebounded just once all year.

“[Tshiebwe] is an unbelievable rebounder, [he] gets his hands on a lot of balls, even ones that he doesn’t gather for himself, he’s able to get his hands on,” Stackhouse said. “But he has been rebounding at an unbelievable rate. He’s scoring on the block, his face up, he’s doing some things—he’s having a really good year. But we feel like our big man [Quentin Millora-Brown] is having a really good year himself and I think he’s up to the challenge.”

As the head coach mentioned, Stackhouse’s group has emphasized defending the 3-point line of late, after surrendering 21 3s to Loyola Chicago earlier in December.

They did just that against South Carolina, allowing the Gamecocks to get up just 17 shots from long range. Kentucky only takes 19 3s per game and Kellan Grady is the only Wildcat with over 20 3s made, and the wing is also a name the Commodores have had to game plan for before as he dropped 19 points on Vanderbilt last year as a member of Davidson. Nonetheless, long-balls have only accounted for 29 percent of the Wildcats’ points—the defensive emphasis will certainly be on the interior.

On the other end, a bright spot for the Commodores from Saturday’s loss was Wright and Myles Stute’s 3-point shooting. The pair combined to hit eight of Vanderbilt’s nine 3s in the game and were finding their spots consistently. If Vanderbilt wants to deliver a statement win on Tuesday, getting Pippen Jr., Trey Thomas and others going from long range will be crucial. Pippen Jr., the SEC’s preseason player of the year, has now tallied back-to-back games with seven turnovers.

“Scotty beat himself up badly because he had some uncharacteristic turnovers in the last couple of games and I just think it’s not all on him,” Stackhouse said. “It was some of the things that we were shortcutting on the weak side where he thought guys were going to be, and where we weren’t setting our pin downs and hammer screens with the efficiency that we needed to.”

Finally, although Memorial Gymnasium will still operate at 100% capacity, students won’t be in attendance on Tuesday due to the University’s Commodores Care period restricting on-campus activities until at least Jan. 24. Stackhouse expressed his disappointment on that fact on Monday, but aligned himself with Vanderbilt’s stance on COVID-19 prevention.

“We’re super disappointed about that. I think it’s just unfortunate timing,” Stackhouse said. “I’ve gotten a couple of emails from students and I feel their pain—I absolutely do. I wish they could be there. We’re going to try to do something special for them whenever they’re allowed back, but it’s just right now it’s more important to keep our student body safe, and I think we’ve been doing a good job of that.”

The Commodores and Wildcats will tip off in their first of two meetings this spring on Tuesday night at 6 p.m. CST.