It doesn’t matter whether you’re a Netflix and chill kind of guy or a Hulu and hang kind of gal—there’s always something to watch. And here’s what we’re watching this week. 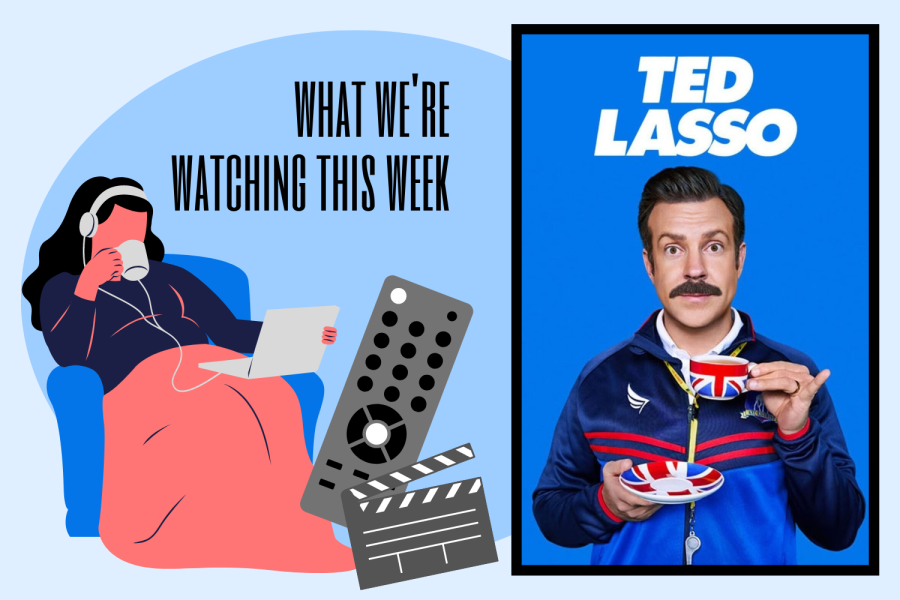 We're the (self-proclaimed) campus authority on all things television and movies. But what are WE watching?

Hey, you. Yeah, you! How are YOU, the lovely reader, spending this week? We, the lovely Life section, are constantly drowning ourselves in different media in a vain attempt to forget the fact that classwork and exams exist. Some of us are the type to get completely absorbed in a movie and change our entire personalities afterward, others have Instagram or TikTok open while a carefully-picked sitcom provides background ambiänce—and many do both. But regardless, we’re always watching something. So here’s what we’re watching this week.

“Ted Lasso” was such a delight to watch that I finished both seasons in two days. I’ll admit I’m a bit late to the party, but this show deserves all the hype and all the Emmys because it is just so wholesome and heartfelt. For those somehow still unfamiliar with the Apple TV+ production, “Ted Lasso” follows the titular Kansan football coach who gets signed to a football club in London—the twist being that it’s the other kind of football.

On the surface, the show is about sports, winning and success, but it is so much more than that. It’s about drive, it’s about pow—sorry, had to. It’s about love, believing in yourself, believing in others, seeing the best in people and pushing them to be better. There is not one character that does not go through a commendable character arc where they strive to grow and improve with the help of those around them. Well, there is this one character, but you’re going to have to watch it to find out their deal.

What happens on the pitch, while equally important, thus becomes a metaphor, an analogy to what happens off the pitch. The team celebrates victories the same way they do when a player secures a date. Ted focuses as much on football as he does on creating a hospitable environment within the club. “I need to give him space so he can shoot,” a player even literally says—referring to his teammate—but we know that, for the coach listening, it is about establishing boundaries with his girlfriend. Off-pitch and on-pitch events go so far as to feed off each other, such that the psychology and well-being of the players and club members impact match results, and vice versa.

“Ted Lasso” is a must-watch. It has well-developed, complex characters and a feel-good (and kind of cheesy) sense of humor, full of movie references and English-American misunderstandings. I did not laugh out loud once while watching, which is not a criticism, because I went through the entire show with a giant smile on my face. And Roy Kent, the aggressive player-turned-coach, is my favorite character in any show I’ve seen in a long time.

Time to talk about the big boy, the behemoth of recent cinema. Above all else, “No Way Home” was really fun (and sad). And, spoiler alert, seeing the Spidey trio on screen together was incredibly heartwarming. I’d say it’s one of the best Marvel movies released in the past few years—not the best, though, as no film has come close to “Thor: Ragnarok,” NWH included.

But in the end, the latest Spider-Man adventure is still a Marvel film, so it is not perfect. It focuses on squeezing in so many references and connections to other Marvel productions that it ends up stretching itself too thin at times. I am in no way complaining though; it is a very enjoyable movie with enjoyable villains—Willem Dafoe is something else. I just don’t get the incredibly high ratings on what is nothing more than a solid superhero movie.

This movie just straight up annoyed me. It has a cool premise and impressive performances, but the artistic choices made in editing and shooting this movie turns the whole thing into an epileptic headache and a pain to sit through.

“Man On Fire” follows John (Denzel Washington), an ex-CIA agent, who is hired as the bodyguard of an entrepreneur’s daughter (Dakota Fanning) in Mexico, and the path of revenge he takes when the girl is kidnapped. And it feels like it was created by a six year old who just learned how to use iMovie yesterday and loves roller coasters.

I have to give credit where credit’s due, of course. Seeing Denzel wreak havoc on douchebags is a genre in and of itself at this point, and with good reason: he plays the role perfectly. Pair that with the cute little girl character that Fanning is known for and you get some great dynamics to build the plot off of. I only wish cocaine wasn’t present in the editing room during production, or while they were shooting, which would result in a semi-respectable movie being made. No such movie has as many 360-pans, quick zooms, or flashing lights as “Man On Fire,” and if it does, it probably uses them at least somewhat tastefully.

A comfort show! I devoured the last four seasons in a week. No, I don’t have much to do, why do you ask?

Jokes aside, “New Girl” is everything a sitcom should be. It has wacky and relatable characters, great relationship arcs, funny running jokes and no laugh track. God, I hate laugh tracks.

I think what makes “New Girl” work is mostly the complexity of the characters above all else. Some episodes have such a loose and simple premise that only works because of the back-and-forth jabs that come out of the well-crafted relationships between the loft-dwellers. I watch for the interactions more than anything: the cat-and-mouse dynamic between Nick and Jess that arises from their unaddressed sexual tension, the obsessive Schmidt trying to get anyone to do anything, or Winston just being Winston with whoever he gets paired with in a particular episode. I could watch the five (and sometimes, six) idiots fight all day.

I have actually watched a lot more this week than what I’ve mentioned above (winter break, am I right?), but unfortunately, writing about everything would make for a very long and tiresome article. Hopefully next time I’ll have a shorter list, because that means I’ll be doing more than just decomposing on the couch!