The Gamecocks outshot the Commodores from the field 55 percent to 39 percent on Saturday, and Vanderbilt fell flat on a last-second opportunity to win the game. 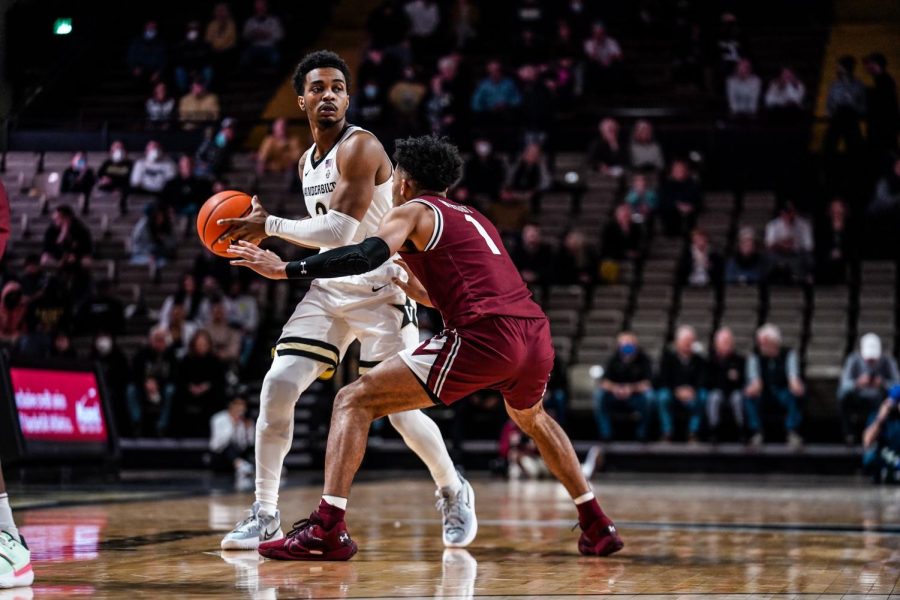 After an exciting 75-74 victory at Arkansas on Jan. 4, Vanderbilt returned to Memorial Gymnasium on Saturday and was narrowly defeated by South Carolina 72-70 in its SEC home-opener. The Commodores came into the game on a four-game winning streak which the Gamecocks snapped with their physicality and excellent shooting.

Stute got off to a hot start, scoring eight of the Commodores’ first 11 points and went on to be the game’s leading scorer with 19 points. However, neither team seemed to hit their stride early in the game with 13 combined turnovers by the teams in the first eight minutes. The lead went back and forth, and the game was tied at 13 midway through the first half.

Two Commodores, sophomore Jamaine Mann and freshman Shane Dezonie, returned from injury on Saturday. Mann, having last seen the court on Dec. 18 against Austin Peay, provided a much-needed lift off the bench for head coach Jerry Stackhouse’s team, contributing nine points and six rebounds including key finishes around the rim during moments of offensive stagnation.

A flashy steal and two-handed slam dunk by sophomore Tyrin Lawrence excited the home crowd of 5,581 in Memorial Gym as Vanderbilt held a slight lead as the game went on. However, the Gamecocks stayed in it with success in the post, outscoring Vanderbilt 18-8 in the paint in the first half. South Carolina went on an 11-3 run to end the frame, and their 64 percent shooting from the field compared to Vanderbilt’s 39 percent in the half led them to a 34-32 lead at the break that they would never give back. Stackhouse attributed some of the South Carolina offensive runs to a lack of execution.

“Our weak-side help was a little late or, a couple of times, nonexistent. Things we know how to do that we didn’t execute,” he said. “It didn’t seem like it loomed that big at that stage of the game, but when you get to the end of the game and you’re down two, it looms a little bit larger.”

Before the game, junior Scotty Pippen Jr. was recognized at halfcourt for achieving 1,000 career points as a Commodore earlier this season. However, the SEC’s leading scorer (18.4 PPG) struggled at times against South Carolina’s stingy defense and took almost 16 minutes to get on the board with a basket. While the All-American candidate added a few more buckets in the second half—mostly from the free throw line—and ended up with 17 points and six assists on the day, his seven turnovers proved costly for Vanderbilt.

South Carolina stretched its lead out to eight points early in the second half as the Commodores struggled shooting, but Vanderbilt’s full-court pressure and four made free throws by Pippen Jr. allowed them to cut the lead to one point with 11:30 left in the second half. The Gamecocks countered with a 10-0 run of their own, however, and the Commodores found themselves down 64-53 with 7:18 remaining.

With a few defensive stops and free throws at the other end, the Commodores clawed back into the game, and with two minutes to go, Vanderbilt was down just 69-65. Despite not playing his best game, the ball went to none other than Pippen Jr., who made a fade-away jump shot in the middle of the paint to make it a one-possession game.

On the defensive side, senior center Quentin Millora-Brown took an important charge to give the ball back to the Commodores with a chance to tie or take the lead. However, a Pippen Jr. turnover led to a South Carolina dunk in transition. Free throws from both teams ensured, leaving Vanderbilt with the ball down 72-70 with six seconds left in the game.

After Stackhouse called a timeout to set up a play, Pippen Jr. took the ball the length of the court, driving into the lane but was trapped by the South Carolina defense. He threw the ball away as time expired, and the Commodores were unable to get up a shot on the final possession, causing the Gamecocks to take the victory. After the game, Stackhouse explained what he saw on the last play, explaining that it was designed for his star guard to kick to Trey Thomas for an open 3-pointer.

“If [Pippen Jr.] catches it and he has a break, then he has plenty of time to execute what we want him to, but because they jammed him on the ball, it took a second or two for him to get into motion,” Stackhouse said. “It was not executed well because of the time and the jam, but it probably wasn’t the right call.”

With the loss, Vanderbilt falls to 9-5 on the season and 1-1 in SEC play. The Commodores will hope to bounce back against the No. 16 Kentucky Wildcats on Jan. 11 at 6 p.m. CST. The home game will be broadcast on ESPN.